Heigh-ho, it’s off to Nkandla we go 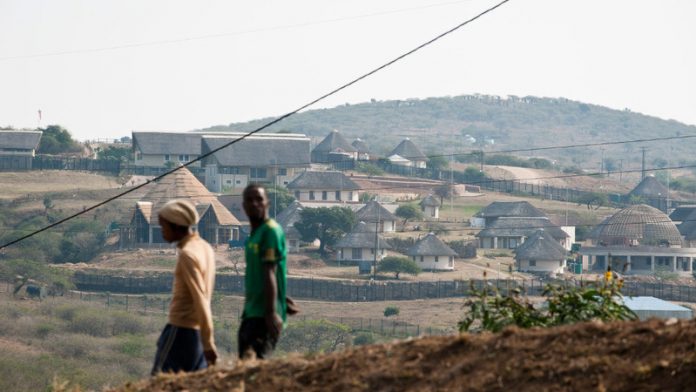 A great South African prince called President Jacob Zuma lost the plot in terms of the politics of the land and was losing friends even faster because of corruption. Zuma decided to vanish into the woods and live in a little cottage.

He found a home in a little town called Nkandla and before he knew it he successfully managed to expand his dwelling into a massive palace. Here he found companionship in the luxury of chicken runs and kraals and fire pools. All kinds of magical and mystical things one only reads about in fairy tales. He could not believe it. The people of South Africa still don’t believe it. But he was safe and happy. Here, he found a place where he was safe, very safe … very safe and secure – (trust me, a lot of money was spent on security).

He felt glad and content at the thought of escaping to his abode, far from the pointing fingers, wicked sorcery and constant questioning by the nation’s citizens and other members of the monarchy. The questions were often about all the luxurious amendments to this piece of property that seemed to grow so extensively and unnecessarily. When did this once humble prince, this man who once promised to be a man of the people, become so brutal so as to steal from the mouths of babes (read: use tax money for crap).

The people could not steal themselves away from insisting on answers. Nkandla was on their minds all the time. They ate, slept and read Nkandla, the prince … just ate and slept well. Such was the magic of the mystical place. But then, one day, something mysterious happened. The prince trotted on back to his palace and upon entering, he suspected there might be an intruder. There were footsteps made of fire pool water leading up to his bedroom and waterwings and beach towels strewn everywhere. The prince was alarmed. Cautiously he followed the footprints until he reached his king sized bed and to his relief found that it was only his evangelist and friend, Nathi Nhleko, who lay sleeping in his bed.

Upon sensing Zuma’s presence, Nathi rose to explain what probably seemed like a very strange sight to the prince. He said that he was supposed to discuss his 50-page report to the Nkandla ad hoc committee so that they would stop with the witchery, leave the prince alone and hopefully understand why the massive upgrade was necessary. Zuma sat next to Nathi, his disposition more welcoming, “How nice to have someone spew forth words of support like that for me”, he thought.

Then, Nathi continued and explained that the ad-hoc committee would hear nothing, excuses they called it, and upon their insistence, Nathi escorted the eleven of them to the estate, so that they could see it for themselves. Zuma, a little shocked at this notion, managed to contain his outburst and instead continued listening, but it was Nathi’s expression that made him feel most nervous.  Eyes downcast and worried about the prince’s reaction, the evangelist hesitantly confessed that once the ad hoc committee entered the property, they seemed so jaded by the whole Nkandla debacle that the evangelist thought it best to take advantage of their mood and lure them to the prince’s side by having them drink and be merry instead, proving to them that “the fire pool was the best water source available”, … for hangovers. That way, they would see the pleasures of Nkandla instead of the pain.

Nathi anxiously lead the prince down to the fire pool and all eleven members of the committee were draped on deck chairs. Zuma, with his infamous chuckle looked at Nathi and patted him on the back.

Ever since that day, Zuma has been happy to keep house for the eleven Nkandla ad hoc committee dwarfs while they pretend to be interested in parliamentary reports and public protector investigations and at night, they all sing, play music and dance. Oh, and swim, in a fire pool, which is located at the Nkandla homestead, which is safe. Very, very safe.