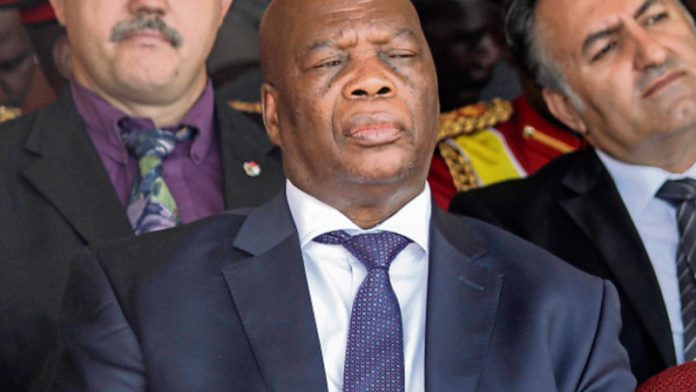 The disgraced former chief justice of Swaziland, Michael Ramodibedi (70), threatened to shoot policemen if they tried to arrest him on charges of defeating the ends of justice and roped in another senior judge to cancel a warrant for his arrest, a report by the Swazi Judicial Service Commission (JSC) has revealed.

At the time he issued the threat, Ramodibedi had barricaded himself in his Mbabane house to avoid arrest. He remained there for 38 days, before charges were dropped and he was allowed to leave Swaziland without facing prosecution.

An inspection of the JSC’s report on the impeachment process against Ramodibedi reveals findings that he:

Despite this, he didn’t appear at the JSC hearings to defend himself, claiming illness. The JSC lambasted Ramodibedi’s role in presiding over a dispute between the SRA and Impunzi Wholesalers over duty on imported blankets, while he was in conflict with the revenue authority.

‘Wealthy businessman’
Simelane’s allegations to the JSC about alleged corruption in this case has been widely reported. According to the report, he testified that Shongwe told him “a wealthy businessman” was willing to hand over R2-million – R200 000 for Simelane, R500 000 for Ramodibedi and the balance for the minister – “if we can help them win the case”.

Ramodibedi allegedly insisted Simelane should be part of the supreme court bench that was to hear an appeal in the matter. This was despite the latter’s protests that he was not eligible for appointment to the supreme court. The JSC hearing was chaired by Justice Bheki Maphalala, who has since been appointed Swaziland’s acting chief justice.

Based on its findings that Ramodibedi disregarded the fundamental principles of judicial office set out in the Bangalore Principles of Judicial Conduct of 2002, King Mswati fired him on June 17.

He is now thought to be living in Ladybrand in the Free State, across the border from his native Lesotho.

Charges against Ramodibedi followed his refusal to grant a warrant for Shongwe’s arrest for allegedly contravening the Prevention of Corruption Act. Swaziland’s Anti-Corruption Commission (ACC)then sought his arrest on charges of defeating the ends of justice.

The JSC report says Ramodibedi then prevailed on another judge, Jacobus Annandale, to rescind the ACC’s warrant for his arrest. The rescission was regarded as “another act of defeating the ends of justice”, culminating in arrests of Annandale, Simelane and the high court registrar, Fikile Nhlabatsi, on April 19.

‘Diplomatic crisis’
The JSC says Ramodibedi’s subsequent barricading of himself in his house became “most untenable and it was apparent that the country was headed for an unprecedented showdown which could easily degenerate into a diplomatic crisis, given that Ramodibedi is a citizen of Lesotho”.

It found he had allocated his dispute with the SRA to Simelane, while the high court registrar had made representations to the authority on Ramodibedi’s behalf.

“When he allocated the matter to Judge Simelane, he knew full well that the judge had been involved in deliberations on the matter whilst occupying the position of registrar, had in fact made statements prejudicial to the SRA on the matter and had written pointed correspondence to the SRA where he expressed specific views,” the JSC states.

“To allocate the matter to … Simelane in these circumstances went beyond simple opportunism; it was an act of seeking to secure a favourable judgment.”

The JSC points out Ramodibedi insisted on allocating the case to Simelane though his own attorney highlighted the conflict of interest.

The estate case related to Shongwe’s announcement of a highly controversial policy on the distribution of estates where a deceased person had been married under Swazi customary law.

Consent order
The JSC accuses Ramodibedi of refusing to record a consent order between the applicant’s attorney and the respondent’s counsel from the attorney general’s office.

“It was not open to [him] to refuse to enter that specific consent order in a civil matter. The consent order would have had the effect of bringing the proceedings as initiated by the applicants to an end,” the JSC finds.

“Refusing a litigant to withdraw a matter when the other side had not even filed answering affidavits, constituted a serious violation of principles associated with the administration of justice.”

The JSC also found Ramodibedi guilty of serious misconduct by allowing Shongwe to address judges due to preside over the matter.

“The minister for justice evidently held sway over the acting judges. What exacerbates the situation is the fact that not only did he [Ramodibedi] and the minister address the judges, but in fact [he] directed them as to how they were to decide the matter.

“This conduct undermined the confidence of the public, the legal profession, litigants and the nation at large regarding the impartiality of judges and the judiciary.”

When contacted for comment, Ramodibedi did not answer his cellphone. Shongwe could not be reached for comment either.

Lesotho’s Ramodibedi rising back to the top?