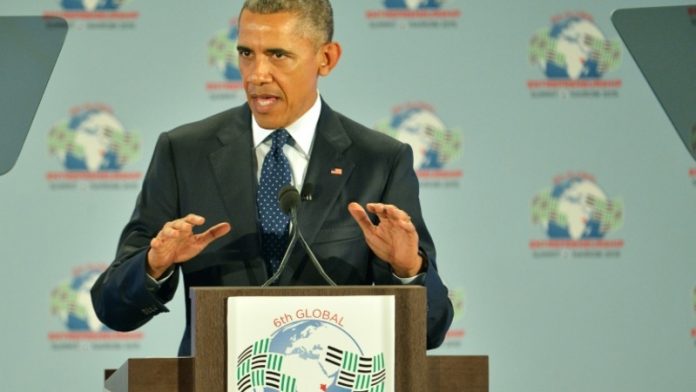 US President Barack Obama on Saturday called for gay rights in Africa, comparing homophobia to racial discrimination he had encountered in the United States.

In a joint press conference after talks with Kenyan President Uhuru Kenyatta, Obama also pushed a tough message on Kenyan corruption, the civil war in South Sudan, controversial elections in Burundi and the fight against Somalia’s Al-Qaeda-affiliated al-Shabaab militants.

“I’ve been consistent all across Africa on this. When you start treating people differently, because they’re different, that’s the path whereby freedoms begin to erode. And bad things happen,” he said in a moment of open disagreement with the Kenyan leader.

“When a government gets in the habit of treating people differently those habits can spread. As an African-American in the United States I am painfully aware of what happens when people are treated differently under the law. I am unequivocal on this.”

He said that for “a law-abiding citizen who is going about their business, and working at a job and obeying the traffic signs and not harming anybody, the idea they will be treated differently or abused because of who they love is wrong, full stop.”

Homophobia is on the rise in Africa, and for his part Kenyatta only repeated that for him, gay rights was “a non-issue.”

“There are some things that we must admit we don’t share. It’s very difficult for us to impose on people that which they themselves do not accept. This is why I say for Kenyans today the issue of gay rights is really a non-issue,” Kenyatta said.

Obama arrived in Kenya late on Friday, making his first visit to the country of his father’s birth since he was elected president.

Obama also had firm words for Kenya on corruption, describing it as “the single biggest impediment to Kenya growing even faster,” and saying people were being “consistently sapped by corruption at a high level and at a low level.”

Obama said there was a need for “visible prosecutions,” to show citizens action was being taken.

“They don’t have to be a forensic accountant to know what is going on,” Obama said, giving the example of officials driving around in expensive cars or building houses far above what their salaries would allow.

The two leaders also pledged greater cooperation against the Shebab, who have stepped up attacks and recruitment inside Kenya.

“We have systematically reduced the territory that Al-Shabaab controls. We have been able to decrease their effective control within Somalia and have weakened those networks operating here in East Africa. That doesn’t mean the problem is solved,” Obama said.

“We can degrade significantly the capacity of the terrorist organisations, but they can still do damage.”

The president called for an end to the 19-month-old civil war in South Sudan, urging the country’s warring leaders to “put their country first.” The conflict there is set to be high on the agenda for the next stage of his visit to Ethiopia and the African Union.

“The situation is dire. We agree that the best way to stop the fighting is for South Sudanese leaders to put their country first with a peace agreement that ends the fighting,” Obama said.

This week’s elections in the central African nation of Burundi, which delivered a controversial third term to President Pierre Nkurunziza, were “not credible,” Obama said.

“We also discussed Burundi, where the recent elections weren’t credible. We are calling on the government and opposition to come together in a dialogue that leads to a political solution to the crisis and avoids the loss of more innocent life,” Obama said.