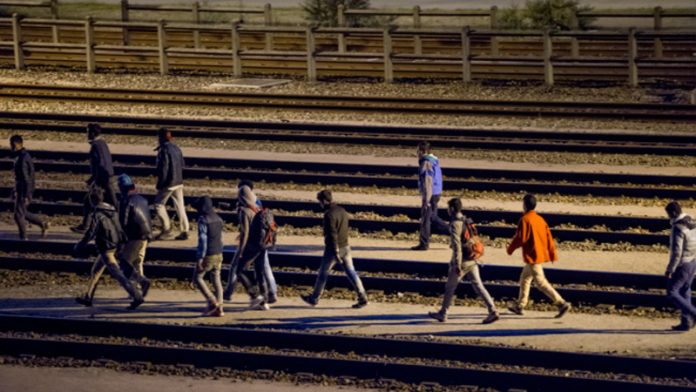 French Interior Minister Bernard Cazeneuve said on Wednesday that 120 additional police officers would be sent to Calais to secure the Eurotunnel terminal after at least another 1 500 migrants tried to make their way through the Channel Tunnel into England late on Tuesday, according to a police source.

Cazeneuve said management company Eurotunnel “must also take responsibility” for securing its premises, which migrants have tried to enter in a bid to reach Britain, resulting in one death on Tuesday.

It was the ninth such death since the beginning of June and followed an attempt the night before by almost 2 000 people who had hoped to make it through the tunnel.

“Our team found a corpse this morning and the firefighters have confirmed the death of this person,” said a Eurotunnel spokesperson.

The migrant, a man of Sudanese origin believed to be aged between 25 and 30, was hit by a truck that was leaving a cross-Channel ferry, the police source said.

The migrants were trying to enter the site “between midnight and 6am”, the Eurotunnel spokesperson said. “All our security personnel, that is nearly 200 people, as well as police, were called in.”

The incident caused delays to the Eurotunnel service for much of Tuesday, with passengers held up for around an hour on the British side and 30 minutes on the French side.

Calm had returned by Tuesday evening to the Eurotunnel premises, which are usually bustling with hundreds of migrants waiting to seize their chance to cross over.

The police source said the migrants did not try to force their way all at once and that the figure of 2 000 related to the overall number of incursion attempts, not of migrants.

Up to three migrants were hurt trying to board the trains, he said.

Cost to company
Eurotunnel said on Wednesday that it had blocked more than 37 000 attempts by migrants to enter its French premises and make their way to Britain since January, and had spent €13-million to boost security.

The company has called for additional help in dealing with the migrant crisis at the French port of Calais as incursions on its premises increase.

Eurotunnel said that since migrants began appearing in Calais, going to extreme lengths to smuggle themselves into Britain, it had spent more than €160-million on additional security such as guards, fencing, lighting and cameras.

“To make up for the lack of resources of state security forces in Calais, Eurotunnel has for example gone as far as putting buses at their disposal to transport the migrants caught” on the premises, according to Eurotunnel.

Eurotunnel said it has had to rely on its own resources to apprehend and hand migrants over to the police and file thousands of complaints in local court. “The pressure we are now under every night exceeds that which an operator can reasonably handle and calls for an appropriate reaction from the states” of France and Britain.

Cazeneuve accused the company in a letter on Tuesday, seen by news agency AFP, of not taking the necessary security measures.

“First of all, I would like you to ask yourself about the human resources you are planning on dedicating to secure the site,” Cazeneuve wrote, noting that the company has slashed two-thirds of its security staff since 2002.

Eurotunnel is seeking €9.7-million from the British and French governments in compensation for disruption caused by illegal migrants.

‘Biggest incursion’
The overnight attempts at entering the train terminal have been described as the “biggest incursion effort in the past month and a half”.

British Prime Minister David Cameron on Wednesday expressed concern over the situation and said Home Secretary Theresa May would chair a meeting of the government’s Cobra emergency committee to discuss the issue.

“This is very concerning,” he told reporters during a visit to Singapore, adding that “we are working very closely” with French authorities to address the situation.

Cazeneuve was in London on Tuesday to hold talks with his counterpart on how to tackle the migrant issue, which has been a thorn in the side of Franco-British relations for years.

“There were some arrests and it all passed off without a fuss,” he said of the latest migrant attempts to cross the Channel.

Cameron said Britain was “doing everything we can” to prevent such incidents, including investing in fencing around the area, adding that he did not want to “point fingers at people to blame”.

Britain has already spent €4.7-million erecting barriers aimed at securing access to the terminal and platforms, which should be ready for use in August, said Eurotunnel.

May said her government would put up an additional £7-million to help France secure the Eurotunnel site on its side of the Channel.

“We’re dealing with terrible criminal gangs,” she said. “We agreed that we will work together to return migrants, particularly to West Africa, to ensure that people see that making this journey does not mean that they are being able to settle in Europe.”

Escalating attempts at entry
For several weeks, there have been numerous attempts by migrants to enter the Eurotunnel premises, with the numbers of people trying to enter the rail tunnel growing significantly in recent days.

“Everything happened overnight and at 6am the police still had quite a lot of work to do,” said the police source regarding the latest attempts, adding that “between 500 and 1 000 migrants” were still around the tunnel site.

Security at the Calais port was stepped up in mid-June, driving migrants who previously tried to stow away on trucks that take ferries across the Channel to try their luck through the undersea tunnel.

The port at Calais has been mostly closed since June because of a dispute between ferry staff from France’s MyFerryLink and the Eurotunnel group, which owns the boats.

Many migrants have tried to take advantage of the backed-up traffic to jump on to trucks making their way towards the harbour.

According to the last official count in early July, around 3 000 migrants from mainly Ethiopia, Eritrea, Sudan and Afghanistan were camped out in Calais.

These are the reported deaths among migrants trying to reach the UK in recent years:

2015
June 26: An Ethiopian was killed near the tunnel as he tried to climb on board one of its lorry-carrying shuttles.
July 7: Another migrant dies inside the tunnel between France and Britain.
July 20: Three migrants die from burns suffered a few days earlier as they tried to enter the tunnel.
July 22: A migrant drowns in Calais while trying to gain access to the tunnel.
July 24: An Ethiopian migrant is struck and killed by a car on a highway near Calais.

2014
May 5: An Eritrean is killed after jumping from a lorry when he realised it was heading in the wrong direction. Two other migrants drown in the port of Calais trying to reach a ferry terminal.
May 23: An 18-year-old Sudanese man is crushed by the bus on to which he was hanging.
More than 20 migrants died in 2014, according to the Calais Migrant Solidarity group.

2012
August 13: The body of a young Asian woman is found at the base of a cliff near Boulogne-sur-Mer. A probe determined that she fell while trying to reach the beach to swim across the English Channel.