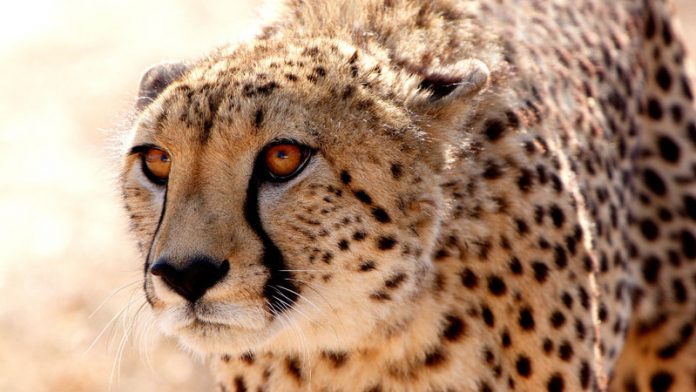 Which is more stressful: being free, but having to fight for your own food and survival, or being confined in captivity, with all your food and security needs provided for?

In cheetahs it seems that unnatural food – rather than captivity itself – is the cause of their known health problems in captivity.

Captive cheetahs commonly suffer from chronic inflammation of the stomach lining, various forms of kidney failure, apparent low libido and immune system abnormalities, which are rarely seen in their wild counterparts. Also, members of the cat family are known to groom themselves meticulously, yet captive cheetahs are often covered in burrs and biting flies and hardly seem to notice these discomforts. Cheetahs in zoos and other facilities have shorter life expectancies and lower breeding success than other big cats in captivity. In these confined environments, cheetahs often produce large amounts of the stress hormone cortisol and many believe that, for cheetahs, life in captivity is simply too stressful.

Besides stress, many have proposed that a lack of exercise, low genetic diversity and the provision of unnatural diets may play some role, but despite several studies, explanations continue to elude both vets and researchers.

Using a new approach, a research collaboration between the National Zoological Gardens of South Africa (colloquially known as the Pretoria Zoo), the University of Pretoria and North-West University was established to generate some basic information about captive cheetah physiology and metabolism. The research uses new technologies developed in the field of metabolomics.

Metabolomics involves analysing a large number of chemical compounds in biological samples such as blood, urine or spinal fluid. The analysed and quantified samples provide a fingerprint, or profile, of an individual cheetah’s metabolic state. Scientists hope to identify more areas of investigation, which could lead to more effective disease prevention and/or treatment.

Our ongoing study analysed the blood and urine samples from more than 50 captive and wild cheetahs at the AfriCat Foundation near Otjiwarongo in Namibia.

The samples were initially injected through a gas chromatography machine which separates the various compounds in the sample according to their level of volatility. Through this process, each compound is isolated and sorted so that it can be individually scrutinised with a mass spectrometer, which helps to identify and accurately quantify the compounds.

Organic acids make up a large proportion of the compounds excreted in urine. For the most part, they are the intermediate and end-stage waste products of the metabolism of proteins, fats, carbohydrates and hormones. Organic acid analysis is like sorting through a household’s garbage bin. The different compounds in urine are like individual waste items, providing information about what and how much was consumed, and how it was utilised.

The wild cheetahs excreted much higher concentrations of compounds associated with the breakdown of fats, indicating that they are eating significantly more fat than the captive cats. This makes sense, because we know that wild cheetahs tend to eat the high-energy fat that surrounds the abdominal organs of their prey first, and then move on to the rest of the carcass (including the blood, internal organs, skin and bones). In contrast, captive cheetahs are largely fed relatively lean beef, horse or donkey muscle meat. Cheetah keepers often trim off the surplus fat, and discard nutrient-rich organs.

One possible negative toxic effect is that these phenolic compounds can suppress the production of key neurotransmitters like dopamine and serotonin. Dopamine and serotonin play a critical physiological role in almost every part of the body, but are particularly important in the brain, gastrointestinal tract and kidneys.

In humans, low dopamine and serotonin levels are often implicated in major depressive disorder. Drugs like fluoxetine (Prozac) or pramipexole are often prescribed to patients with depression to make more serotonin available in their systems or to mimic the action of dopamine.

We found evidence of reduced dopamine production in a number of the captive cheetahs.

Like most humans with clinical depression, captive cheetahs also have enlarged adrenal glands and produce excessive amounts of the stress hormone cortisol. We are now investigating whether the dopamine and cortisol systems are linked and if these animals are depressed or suffering from some form of physiological stress. Also, it is possible that the lack of grooming behaviour observed in captive cheetahs is related in some way to this depression, much like depressed people take less care with their grooming.

But dopamine does more than regulate an animal’s mood. It also appears to play an important role in gastrointestinal disease. It protects the lining of the stomach from stress-induced ulceration, improves intestinal contractions, and increases blood flow to the stomach, pancreas and colon. In the kidneys, dopamine regulates filtration rates, stimulates sodium excretion and influences systemic blood pressure. This also raises some interesting questions about the role of dopamine in the chronic stomach and kidney diseases that develop in many captive cheetahs.

The results of our study seem to indicate that the muscle-meat-rich, high-protein diets fed to captive cheetahs lead to increased levels of undigested protein in their colon. In turn, this could be responsible for a cascade of biochemical reactions that ultimately affects their serotonin and dopamine production and leads to chronic psychological problems and organ damage.

A more balanced healthy diet of fat, skin, blood, organs and just a little muscle meat may be what cheetahs need to thrive.