De Cocky gets a lesson in humility 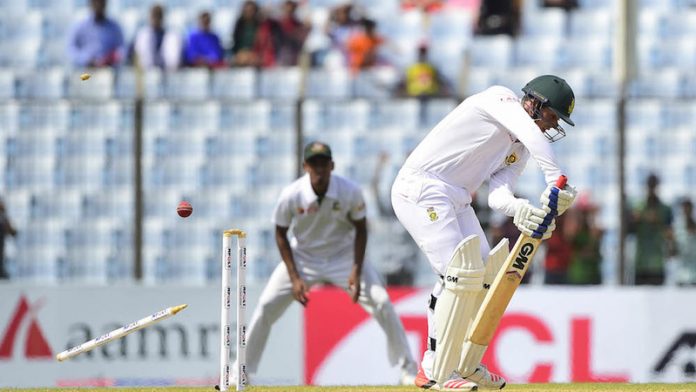 The absence of AB de Villiers and the absence of form in his fellow geniuses, Hashim Amla and Dale Steyn, allowed another crucial member of the Proteas tour party in Bangladesh to fly under the radar with his own lack of direction and confidence. But only for so long.

Quinton de Kock was dropped for the second Test match, allowing 30-year-old Cobras wicketkeeper-batsman Dane Vilas to make his debut. It may seem harsh on De Kock after a second ball duck in his only innings – in the first Test in Chittagong – and an exemplary performance with the gloves, which included a brilliant legside stumping, standing up to medium pacer Stiaan van Zyl.

As always with these things, the problems leading up to the decision extended a lot further back than the last innings when De Kock walked to the wicket to face a hat-trick ball, survived it, but was then bowled on the next delivery, giving the excellent left-arm seamer Mastafizur Rahman three wickets in four balls.

It is more than a year and half since his three consecutive one-day international (ODI) centuries against India thrust the just-turned 21-year-old firmly into the international spotlight. But he has made 11 single-figure scores in his last 21 innings at the top of the order since then, including two in the recent series against Bangladesh, which South Africa lost embarrassingly.

You would not think De Kock was lacking in confidence judging by his demeanour, but that’s how most precociously talented sportsmen with a sublime record behave when they experience their first significant dip in results. Everything has worked perfectly well up until now, so why wouldn’t they assume things will come right sooner rather than later?

Technically dubious styles are easily and conveniently ignored when they are producing results but they also require more work than orthodox methods and not merely physical work. Like every young, ambitious cricketer should, De Kock has been prepared to work as many hours as the touring schedule allows. His glove work is testament to that.

Less open to advice
But the era of wicketkeepers being selected for the quality of their wicketkeeping passed three decades ago. Batting at number six or seven, De Kock’s role in the Test team was as important as that of his more prominent one in the ODI XI. And, whereas he was prepared to listen and learn as a ‘keeper, working hundreds of hours with the Proteas’ underrated fitness and fielding coach, Greg King, he has been less open to advice with a bat in his hands.

Attitude is a quality judged by team-mates and coaches in much the same fickle way that the game itself dispenses form. When the latter is good, the former can be whatever you like and will be tolerated. When the runs dry up, however, every single quip or piece of backchat, which once induced tut-tuts and smiles, is received with rapidly increasing frustration and ire.

When De Kock was scoring hundreds and dominating games, quickly earning a reputation as a game-changer, he was “cocky” but a lovable nuisance. Disrespectful comments to senior players were ignored or overlooked. Everyone knew that his time to learn would come, as it does to everyone.

De Kock is now likely to be sent on the South Africa’s “A” tour to India where he will play in both the limited overs triangular with Australia and India’s “A” teams, as well as the two unofficial, four-day “Tests” – ironically, in place of Vilas, who was originally selected in the “A” squad. It is a sign of how highly De Kock’s match-winning ability is still regarded.

It means he will spend just over four months on the subcontinent, if he is recalled to the Proteas squad in all formats of their marathon, 72-day tour of India from October to December. Even for a young man without responsibilities beyond his career, that is an awfully long time to be away from home. Most Indian players don’t spend that long in India in a calendar year.

Every cricketer has his technique worked out by the opposition, which is why reinvention is an ongoing part of staying at the top. Video analysis exposes flaws faster than ever these days. As long as De Kock believes the runs will flow once again by doing what he has always done, he may struggle to return as soon as he would like.

His coaches and team-mates would certainly like him to return as soon as possible. They know how good he can be, and with eight Tests and a dozen ODIs coming up against India and England this summer, they need to be at full strength.

De Kock is an outstanding talent and, with the quality of support available to him, this will hopefully be no more than a natural hiatus experienced by almost every gifted player. But he has to be open to change, he needs to want help. Above all, he needs a bit more of that most essential ingredient in all sport, but especially cricket – humility.