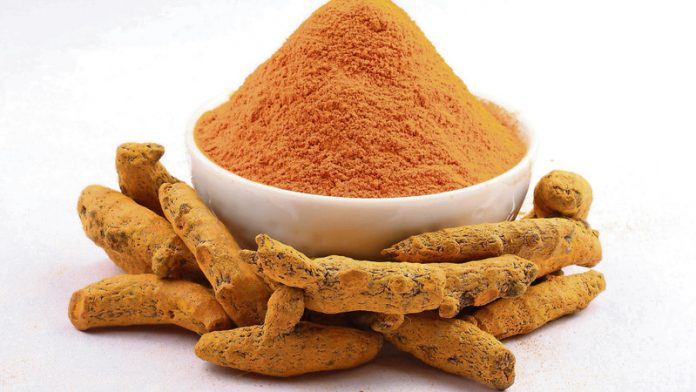 Thousands of years ago, before the time of antibiotics and antiseptics, Indian men and women discovered that the roots of a white-flowered plant could be used to treat ailments. By crushing the roots into a bright golden powder, they could heal skin wounds, bites, eye infections and burns by rubbing this powder on them. Interestingly, this same powder was also used in ancient Indian cuisines and curries, and is now known as the common kitchen spice, turmeric.

As we grow older, we are more likely to develop health problems related to age, such as cancers and tumours, heart disease and neurological disorders like Alzheimer’s and Parkinson’s disease. Is it possible that a spice found in most South Africans households could treat these ailments, and offer a secret to preventing diseases that are more often than not a consequence of ageing?

Curcumin is the main component of turmeric, a member of the ginger family known to have anti-inflammatory properties. Curcumin is of great interest to researchers as a promising treatment for a variety of diseases including Parkinson’s and Alzheimer’s disease. Studies looking at the occurrence of neurological diseases in countries with a high consumption of turmeric, such as India, have found that there is a lower prevalence of these diseases compared to Western countries such as the United States. A study published in 1998 retrieved 84 human brain samples from donors from India and the United Kingdom, revealing that the Indian brain samples had fewer dead cells than the samples from the United Kingdom.

A second study in 2000 conducted by Mary Ganguli and colleagues from the University of Pittsburgh found that, in two separate sample groups of 564 and 970 people respectively, Indian men and women between the ages of 70 and 79 had a four times lower frequency of Alzheimer’s disease compared to age-matched American controls. It appears that populations that consume large amounts of turmeric, such as the Indian population, are less susceptible to brain cell death related to neurological disorders, than other populations.

Parkinson’s disease is a terribly destructive movement disorder, and symptoms include resting tremors, rigidity and postural instability, which is a loss of balance resulting in a constant feeling of unsteadiness. These symptoms are caused by the death of specific brain cells responsible for our everyday movement. When these cells die, bodily movement is altered and restricted. There are several causes of Parkinson’s disease, such as exposure to pesticides, head trauma or an underlying genetic predisposition. The actor Michael J Fox is a well-known example of the early onset form of Parkinson’s disease – he was diagnosed with the condition in his early thirties.

Research in different cell and animal models is continuously showing the protective effect of curcumin against disease. For example, if cells are exposed to a harmful substance that causes them to stop functioning properly, pre-treatment with curcumin appears to protect the cells from this damage. The common fruit fly is often used to model the symptoms of Parkinson’s disease, in order to study the disease. When Parkinson’s disease is induced in these flies, they exhibit movement problems such as the inability to fly. But when flies with the disease were given curcumin, in an experiment conducted in 2013 by Zhauhui Lui at the University of Maryland, they were able to fly normally again.

As part of the Parkinson’s Disease Research Group at Stellenbosch University, we decided to create a “disease in a dish” model for my PhD research project. Through altering the genetic aspects of brain cells, we aimed to create a model of Parkinson’s disease in cells grown in a dish.

The idea was that we could then study the effect of curcumin on this model and further our understanding of the protective effects of curcumin on Parkinson’s disease.

We found when we added curcumin to the Parkinson’s disease cells, it substantially improved the condition of the cells at a molecular level. The cells appeared to return to a healthy state similar to control cells. Cell viability (the percentage of living cells in the sample) was significantly increased when the cells were treated with curcumin.

Furthermore, cell death was substantially reduced, almost to a non-existent level, in these cells. These results suggest that curcumin may play a protective role in the prevention of brain-cell death, which is a key factor in the onset of Parkinson’s disease and other neurodegenerative diseases. Based on these results, the next question to be answered is how does this happen?

In an attempt to answer this question, we focused our attention on a key component of cellular maintenance – energy production via a process known as respiration. Respiration is when sugar and oxygen molecules are used up in the cell to produce carbon dioxide, water and energy.

Unhealthy cells such as the cells in which we modelled Parkinson’s disease, had lower respiration than normal, healthy cells. We found that when we added curcumin to our “disease in a dish” model, cell respiration increased, and the cells were changed into a more healthy state by curcumin. These results, together with the observation that curcumin rescued the cells from cell death, provide insight into the role and mechanism of curcumin at a molecular level.

Research based on novel drugs is vital in order to overcome the major problem faced today in all diseases – how do we prevent the onset of a disease before the symptoms begin to manifest? By studying this golden spice, we may be one step closer to reaching an answer to this question with regards to Parkinson’s disease.