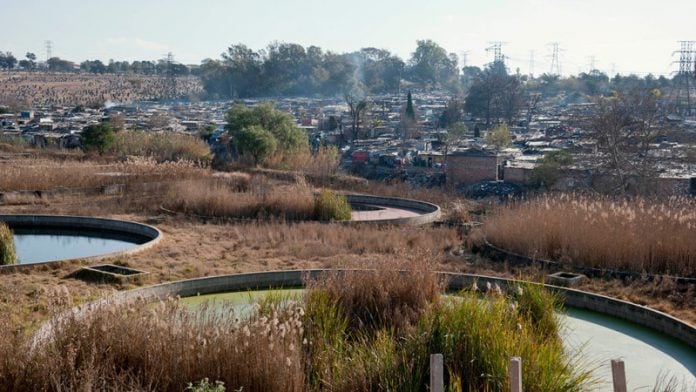 Most of South Africa’s 800 municipal water treatment plants are releasing raw sewage into the country’s rivers. Water affairs department officials say they have been told to look the other way until after next year’s local government elections.

“We have been led to understand that until the 2016 elections there should be less focus on exposing any wrongdoings at municipal plants,” says a water affairs enforcement official, who insisted on anonymity.

There was no explicit command, but the “order” came from the top of the department, says the official, who is one of three in the department who confirmed the hands-off edict occurred.

Water affairs is under the leadership of Minister Nomvula Mokonyane. She told Bekkersdal protesters before the national elections last year that the ANC “doesn’t need their dirty votes”.

An official in the department’s Pretoria offices says, “You know how it works: the word goes around that we should back off and you do what you need to do to keep your job.”

Little oversight
This means municipalities have little oversight, the official says. “Our hands are tied by politicking and heavily polluted water is the result.”

Water affairs spokesperson Sputnik Ratau says there has been no interference with the actions of enforcement officials. “The enforcement unit is very active regarding the monitoring of all kinds of activity with an impact on our water sources and environment.” This involves a carrot and stick approach, he says. “Enforcement needs to be understood as a way of also assisting those that pollute to know their responsibilities.”

There are 821 sewerage plants operated by municipalities. These process sewage from towns, clean it and then release it back into rivers and dams. Each municipality needs a permit for this, but submissions over recent years to Parliament show that dozens do not. The last major report into the plants, the 2012 Green Drop audit by water affairs, found that 317 were in a “critical state”. Only 40 were in an “excellent situation”.

The effect of this is recorded by civil society groups countrywide. Through social media pages and court action, they have myriad examples of sewage flowing through homes, rivers and wetlands, contaminating farmlands too. Most of the time the culprit is the nearby municipal treatment plant.

Rand Water is the utility tasked with cleaning polluted water from the Vaal Dam to be used as drinking water in Gauteng and parts of Limpopo and Mpumalanga. After it visited the Standerton plant in Mpumalanga last year following citizens’ complaints, the utility gave a report that could hold true for most other plants: “The effluent was, in essence, raw sewage.”

Lack of maintenance
The main cause was a lack of regular maintenance over a protracted period of time, the report said. This led to corrosion, inoperable pumps, worn bio-filter bearings and inoperable monitoring equipment. “There is no scheduled maintenance programme and currently no in-house artisans are available to undertake repairs and maintenance work.”

The report also noted that cables and the aluminium sludge gates on the drying ponds had been stolen.

“The situation needs urgent attention as further delays would lead to significant consequences,” it said.

Lack of maintenance is often cited as a reason for sewage being released. In Brits, treatment plants pump sewage into the Hartebeespoort Dam, which supplies water to farmers and to the Limpopo province.

A technician familiar with the system says that instead of two pumps at each station there is only one, which means there is no backup. The pumps are no longer being serviced because the municipality has not paid contractors. Instead, new pumps are being bought from abroad. In the meantime, raw sewage is released.

‘Nobody cares’
A worker at a treatment plant in Giyani, Limpopo, told the Mail & Guardian earlier this year that little emphasis was placed on releasing clean water. “Nobody cares what we release from our works, and nobody checks,” the worker said. “We get a paycheque regardless of quality.”

All the plants should be forced to clean up their act through a directive issued by water affairs. A 2010 one read, “I have reasonable grounds for believing the Ngwathe Local Municipality is operating the Parys wastewater treatment works in a manner that causes, or is likely to cause, pollution of a water course.” The municipality complies or is then taken to court.

Where enforcement does not happen, people have to live with the health effects of sewage. The World Health Organisation lists dozens –from pathogens causing diarrhoea to cancer and cholera outbreaks.

No comprehensive studies have been done in the country of the link between sewage and the burden of disease. But poor water quality has been cited by the European Union in several warnings to local farmers about the quality of their products.

98% of rivers ‘high risk’
Water affairs recently released a “dashboard” of the results of its water quality monitoring stations. In the last year, 98% of the rivers it assessed were at “high risk” because of the levels of faecal coliform.

The department and its affiliates appear to freely acknowledge problems. In response to questions about a large fish kill in the Watervals River – a tributary to the Vaal Dam – Rand Water told residents: “It is well known that the river is quite polluted due to the poor performance of the sewerage works at Embalenhle, gold mining and Sasol Secunda.”

In nearby Frankfort, the regional court ordered in 2004 and 2008 that the municipality stop releasing untreated sewage from its plant. The order was repeated last year, with the court saying the municipal manager should be jailed for 90 days if it did not comply. Citizens are back in court to get the order enforced.

Activists have folders of correspondence with water officials and local government. The former seems to respond more often. In one communication, Marius Keet, a deputy director at water affairs, says: “If it is not blood on the streets of Parys, it’s AMD in JHB streets or swine manure entering the Vaal River!!!”

The system to save failed councils needs a significant overhaul