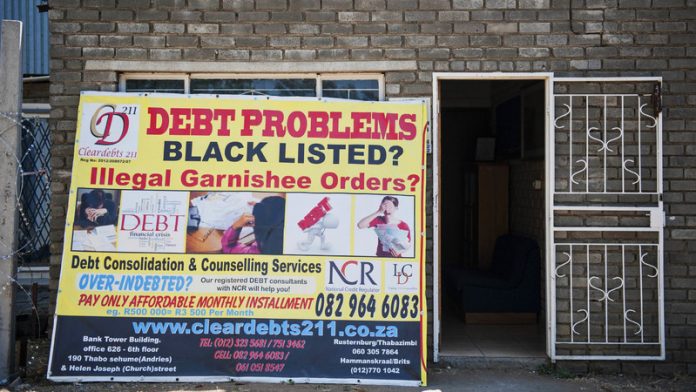 A recent judgment in the Western Cape High Court outlawed certain practices relating to garnishee or emoluments attachment orders. This was a minor victory in a series of battles: part of a long war against this much-derided part of South Africa’s credit culture.

Concerns about this practice have heightened since the dawn of South Africa’s democracy. People who were supposed to be enjoying the fruits of full citizenship have found themselves excluded from those benefits because, even though they may have relatively well-paid jobs, they feel they are “working for mashonisa” (a person or company who provides loans) rather than for the good of their families.

Concerns surfaced in 2007, when Frans Haupt and Hermie Coetzee of Pretoria University’s legal aid clinic did research showing how BMW workers were affected by the garnishee epidemic. Showing that not much had changed, the problem reared its head again in 2012, in the wake of the Marikana shootings. It emerged that the miners, not necessarily in the lowest pay bracket, had unsustainable levels of debt. Their pay, automatically transferred into their bank accounts at month end, was being transferred out of these again with equal ease by those to whom they owed money. Shortly after payday, many of them had nothing left to live on.

The illegal practices that have now been definitively exposed —and ruled against — include counterfeit signatures and the issuing of orders by uneducated or corrupt clerks in areas of jurisdiction where the debtor does not reside. But even without these, garnishee orders have had an extremely negative effect on employee wellbeing.

Employees, ranging from public servants to factory workers, find that most or even all of their salary is attached by microlenders, furniture stores, and the like; they then start borrowing from new sources to pay their original creditors. Each of these new creditors then queues up to apply for a further garnishee order on that debtor’s salary.

Many debtors resign from employment and cash in their pensions to settle their debts, rather than retaining these for use in retirement. Many people have been driven to abandon their bank accounts and to open new ones, but creditors pursue them from one account to the next. In a related trend, employers have resorted to paying workers in cash or with prepaid cash cards to help them evade lenders, big and small.

What is the longer-term history behind this phenomenon? How did we arrive at a situation where consumers’ finances, and even their bank accounts, became subject — as Haupt and Coetzee put it — to “external control”?

From the very onset of mining and industry in South Africa, rural  cultivators found themselves encouraged, even forced, into working as migrant labourers by traders doubling as labour recruiters. A store owner would give items — or cattle — in advance, then push the recipient into accepting a wage contract. This served to ensure the repayment, with interest, of that loan and secured a tidy line of profit for the trading store owner.

The colonial authorities, condemning this as an abusive practice, introduced a system of deferred pay. A miner’s wage was given to his family later, through an official intermediary, rather than being put directly into that miner’s hands for the purpose of paying off the advances he’d been granted. Of these two strategies, one was a nakedly exploitative technique of cowboy capitalism, the other was a paternalistic form of protection. But the long-term effect of both these arrangements was to separate workers from their wages, leaving these earnings in the hands of others, mostly to negative effect.

This same form of alienation, exacerbated nowadays by employees’ fear in the face of an increasingly complex set of legal arrangements, informs their sense of disempowerment in the face of garnishee and debit orders and the like. All this translates into a poorly developed sense of consumer rights.

A further element — a change in the way wages are paid — has contributed to this sense of powerlessness. For decades, migrants and other blue-collar workers have made selective use of the formal financial system. Paid in cash, they have chosen to put their money in different “portfolios”. They send home postal orders, take out fixed deposits, put money aside in lay-byes, or use parts of their wages to buy items of furniture on hire purchase (thereby evading undue demands by members of the extended family).

What does this change mean? Back in the 1930s, people were already having loans extended to them by retailers.

“On all sides”, observed American social worker Ray Phillips, who was based in Johannesburg, “the ‘hire-purchase’ system of acquiring pianos and furniture is responsible for much of the indebtedness of the Africans.”

“The fault,” said one of his informants, “lies with the sellers or dealers in furniture” who routinely sold these items to customers without checking their ability to repay. The result was that “the buyer, after paying some accounts at the end of the month, is unable to make ends meet. He goes to another shop where he contracts another debt and so on continually.”

What has made debt collection a much more streamlined and impersonal affair has been that wages are now paid into bank accounts.

The money then flows effortlessly out of the accounts again — or, when garnishee and administration orders are authorised by clerks of the court, is creamed directly off by creditors before the money is even banked. Alternatively, people agree to direct debits or yield up their ATM cards to mashonisas who use these to withdraw funds with interest.

These historical precedents, combined with today’s highly technologised electronic flows of money, give some insight into how garnishee abuse became second nature in South Africa. But why were adequate consumer protections not put in place? Xolela May, who formerly worked for the Black Sash office in Knysna, said that existing legislation did provide safeguards.

Debtors had greater rights than were normally recognised, under section 65 of the Magistrates’ Court Act of 1944, which insists that before any court order can be made in respect of the financial attachment of the emoluments (the wages) of the debtor, the court ought to ensure that the debtor has enough remaining to maintain himself and his family. But this section was routinely ignored. So the existing law was attentive to consumer rights, but it had not been properly enforced.

In the course of the parliamentary hearings on the National Credit Act, in 2005, one lawyer suggested that a new law was not needed.

Instead, the Magistrates’ Court Act should be amended, making it mandatory to have judgments “dealt with in an open court of law” rather than being given, often either fraudulently or in ignorance, by clerks of the court.

But this suggestion was not taken up, and it would take another 10 years before the Western Cape High Court case definitively established the illegality of these practices.

Only time will tell how far that judgment will be implemented in everyday practice.

Deborah James, author of Money for Nothing, is professor of anthropology at the London School of Economics. Her previous books include Gaining Ground? “Rights” and “Property” in South African Land Reform (2007) and Songs of the Women Migrants (1999)