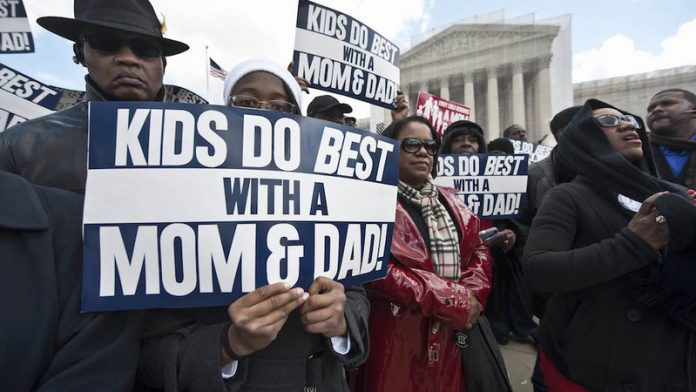 It is time for Christians to embrace modernity and social diversity. Many Christians thought the world had collapsed when the United States Supreme Court ruled in a majority judgment last month that same-sex marriage is a constitutional right.

Many Christians are still perplexed by the judgment and in need of answers. They must recognise that the US Supreme Court is a secular institution, mandated to promote and protect the rights of US citizens.

The courts make decisions based on constitutional rights and fundamental liberties. The duty of judges is not to debate scripture; it is not for them to consider Leviticus 11, Romans 1 or First Corinthians and weigh them against national laws and policies.

Christians must develop a progressive world view that reflects reality. They must abandon subjective and condemnatory theology that negates the timeless truths advanced by Jesus Christ or violates the principles of human rights.

Society in the days of Abraham was different from the society of Moses: Abraham married his sister Sarah (Genesis 20:12), a practice that merited the death penalty in the time of Moses (Leviticus 19).

Likewise, Moses’s society was different from that of Jesus. Moses made laws that encoded retributive justice, in which adulterers, fornicators, homosexuals and persons who insulted their parents were put to death (Leviticus 19). Jesus advanced restorative justice and changed most of Moses’s rules (Matthew 5:38-41; John 8:1-11).

To appreciate the scriptures and to interpret and apply them appropriately in the light of modernity, it is important to understand the hierarchical order of the laws in the Bible. Undoubtedly, the set of 10 commandments given to Moses is the supreme law – the equivalent of a contemporary constitution.

The next are the Deuteronomical laws, the interpretation of the 10 commandments equivalent to modern case law. The last are the teachings of the apostles and the prophets, which are based on the first two superior laws.

The teachings of Moses and the other prophets fall into the last category, and they are the cause of most contemporary controversies, particularly those to do with sexuality.

Christ taught peaceful coexistence and tolerance of “sheep in the midst of wolves” (Matthew 10:16). It is wrong, therefore, for Christians to condemn people based only on Mosaic teachings.

Even though Christianity was built on the foundation laid down by Moses, the rules and principles are no longer the same. Moses was a radical, Christ a liberal.

Scripturally, God does not rule different societies at different times with the same laws (Jeremiah 8:7). This idea is called the doctrine of dispensationalism. Great systematic theologians such as Matthew Henry, Jack Hayford and EW Kenyon argue that today’s society is in the era of grace dispensation, and so the greatest commandment is love: loving God and loving your neighbour (Matthew 22:37-39). God loves homosexuals, just as he loves bisexual and straight people.

The task of the modern Christian is to understand the perspective of Christ and its application in today’s complex society. It is generally accepted that an ideal contemporary society promotes democracy and protects and respects religious freedom, and the basic human rights of all, not mere theocratic ideals.

Hence, the people rule to advance and protect their supreme interest, their rights. The interest of the people, big or small, prevails. Thus there is the need for Christians to find a mutual compromise to embrace social diversity, specifically the human rights of homosexuals.