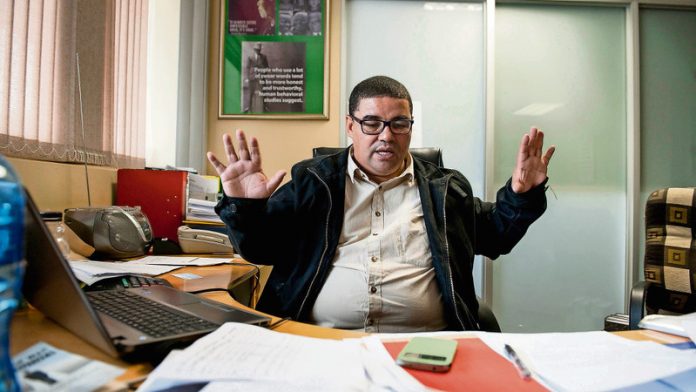 The net may be closing on Desmond Stevens, the senior fisheries official who headed the disastrous fishing rights allocation process in 2013 (Frap2013).

The Hawks have wrapped up a corruption investigation into his role and handed a docket to the prosecuting authority for a decision. And the public protector has launched a preliminary probe of Stevens after a complaint by Gary Simpson, the former boss of Cosatu’s fishing desk.

Simpson says there are widespread allegations of collusion and corruption in the 2013 process, known as Frap2103.

In his dossier, which he also sent to Agriculture, Forestry and Fisheries Minister Senzeni Zokwana, he repeats media claims that Stevens tried to solicit a handout for the Umkhonto weSizwe Military Veterans’ Association from a company contracted to the department. AmaBhungane has not seen evidence of this claim.

Stevens signed off on the rights awarded after former fisheries minister Tina Joemat-Pettersson delegated authority to him.

Failures
But last May, Joemat-Pettersson said it would be impossible to deal with all the legal challenges arising from Frap2013 and set aside the entire allocation. But she spoke too soon – a departmental source said only a judge could annul the process.

Frap2013’s failures and the fact that Stevens remains director of stakeholder relations in the fisheries department has sparked criticism. And there are suggestions that Joemat–Pettersson has his back.

“Proper fishermen need to be identified – we can’t hand out paper quotas to people overseas while South Africans who depend on fishing suffer as their livelihood is taken away.”

Democratic Alliance fisheries spokesperson Annette Steyn said it was mind-boggling that Stevens was still with the department. “We wrote to the minister asking why he’s still there and were told he’s not involved with awarding contracts.”

She said the department was sitting on reports implicating Stevens and others. “They must face disciplinary hearings.”

Ndudane said “there was no reason for 2013 to happen”.

But a high-ranking insider, who asked to remain anonymous, said: “The fact that [those who led Frap2013] still work for the department sends the wrong message: people can do what they want and get away with it.”

The 2013 process allocated rights in the hake handline, demersal shark, tuna pole line, squid, traditional linefish, oyster, white mussel and Kwazulu-Natal prawn trawl sectors. A total of 593 applicants were successful and 1?083 who were rejected – including many former rights-holders – have appealed.

Applications for Frap2015-16 start on September 7, with allocations announced on February 29 2016.

“Their value far exceeds Frap2013,” said an expert. “They would be worth R40-billion if rights are allocated for the standard seven-year period.”

The NPA’s Western Cape spokesperson, Eric Ntabazalila, said he received the docket two weeks ago, but “the nine lever-arch files will require some time to go through before a decision is made”.

Masibi said the public protector received a complaint in June implicating Stevens. The protector would conduct a preliminary probe to decide the merits of the allegations.

Speculation in the fishing industry is rife that Stevens enjoys the protection of Joemat-Pettersson. The claim was repeated by Simpson in a taped conversation with fishing consultant Shaheen Moolla, a member of an independent appeals panel advising the government on Frap2013.

In the tape, which has been handed to the Hawks, Simpson suggests Stevens has information on Joemat-Pettersson and adds: “[Stevens] had a session and they are big buddies ….” Joemat-Pettersson denied the allegation (see sidebar).

Last week Simpson said: “There’s ample evidence against Desmond, but they’re not dealing with him.”

Joemat-Pettersson’s current spokesperson, Johannes Mokobane, said she would not comment “on matters related to her previous portfolio. The minister refutes all allegations levelled against her.”

Investigation by SIU?
Audit reports commissioned by Joemat-Pettersson from legal firms Harris Nupen Molebatsi and Emang Basadi Legal and Forensic Services, raised questions about Stevens’s role in Frap2013. Harris, Nupen and Molebatsi reported it had received allegations of corruption, collusion and poor administrative decisions, and had sent allegations relating to possible corruption “under a separate letter to the relevant authorities, who would be required to decide whether these matters should be sent on for investigation by the Special Investigating Unit”.

Last year, a Sunday Times report referred to allegations that in December 2013 Stevens solicited payment on behalf of the veterans’ association, of which he was treasurer, from a company hired by the department to help with the Frap2013 verification process. The report quoted documents AmaBhungane has not seen.

Emang Basadi uncovered evidence of political interference, saying “some Frap applications scored low and ought to have been disqualified due to failure to meet the criteria … [We were] advised certain Frap officials would be instructed to accept or approve an applicant whose application would have been disqualified had it been properly considered.”

Industry sources, who asked to remain anonymous, spoke out against government inaction.

“At public meetings, department officials have discounted the admissions of corruption contained in the Emang Basadi report,” said one fisheries consultant. “There’s little prospect of running a legitimate process in 2015 until the department acknowledges the enormity of the corruption on the last occasion.”

In parliamentary documents this week, the department said it was adopting the report’s findings.

Protecting Stevens
Another expert said: “There can be little doubt that Stevens is being protected. How else does one explain that he has not been held to account despite two reports finding that the 2013 process was an illegal farce and he was responsible for decisions?

“The Harris Nupen and Molebatsi report notes that he refused to explain many decisions. There are no minutes or records of key decision-making processes and meetings where applications were discussed.”

Said another consultant: “They gave nonsensical reasons to exclude some applicants, for example, that forms were not signed, but allocated rights to people without vessels. It was rubbish, really.

“Stevens, the brains behind the disgraced 2013 process, is still there. The question becomes: why?”

Asked to comment on allegations against him relating to the fishing rights allocation process in 2103 (Frap2013) on Tuesday last week, Stevens took the highly unusual step of passing on amaBhungane’s questions to his trade union, the National Education, Health and Allied Workers’ Union (Nehawu).

But Nehawu’s Western Cape secretary, Luthando Nogcinisa, said it would be “unwise” for Stevens to respond.

Nogcinisa said the union was waiting for the fisheries department “to decide and inform us whether it is busy with an investigation against [Stevens] or tell us what their intentions are about this issue.

“All we can say at the moment is that the treatment to which Mr Stevens has been subjected is unfair and unjust. He has been tried and found guilty in the court of public opinion and we believe that this has been done in order to ruin his reputation.

“We will be formally communicating with the department in order to get official communication from them as to what they are actually intending to do about the matter.”

AmaBhungane followed up by sending an email directly to Stevens this week detailing the allegations against him and asking for a response.

He replied by email, saying that he intended to provide a comment. But he had not done so by the time the Mail & Guardian went to print on Thursday evening.

Joemat-Pettersson was promoted to the energy portfolio in May last year.

Her spokesperson, Johannes Mokobane, said Joemat-Pettersson would not comment “on matters related to her previous portfolio. The minister refutes all ­allegations levelled against her.”

During a media conference in May last year to announce the scrapping of Frap2013, Joemat-Pettersson said that the independent legal audit she had commissioned had found no evidence that the 2013 fishing rights process had deliberately been manipulated or was corrupt.

Stevens’s role in other contentious issues in the fishing sector have also come under scrutiny.

Last year, the Sunday Times reported that the public protector is probing claims that he was paid R1.3-million to extend a contract to run the fishing patrol fleet.

It could not be established whether the public protector’s office is still investigating this matter.

Irregular contract
This week the fisheries department told Parliament the public protector and auditor general had reported that the contract was irregular.

Also at issue is the 2013 transfer of fishing rights belonging to Foodcorp and its subsidiaries to the fishing giant Oceana and its partner Ulwandle Fishing as a punitive sanction for Foodcorp diluting its black empowerment stake.

In his dossier of complaint to the public protector, Gary Simpson, the former fishing desk chief of trade union federation Cosatu, describes the transfer as “entirely uncompetitive”.

Its net result, Simpson argues, was that black economic empowerment had been further diluted.“He has been tried and found guilty in the court of public opinion”