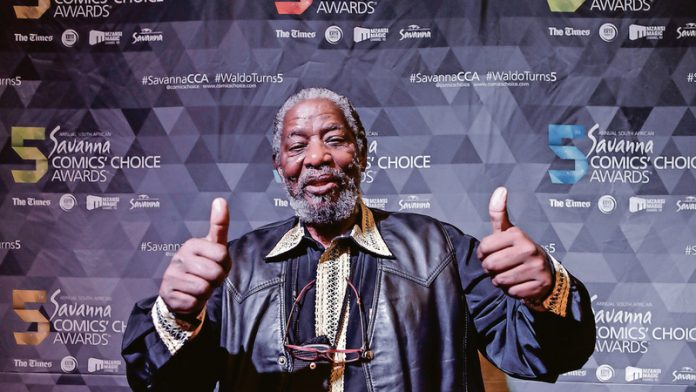 For more than four decades Joe Mafela has been recognised as Sdumo in Sgudi ’Snaysi, Sol in Madam and Eve and as the very ambitious Fela in Fela’s TV. Now Mafela will receive his second lifetime achievement award, the Savanna Comics’ Choice.

The first was his Theatre Management Lifetime Achievement award in 2005 presented at the Naledi Theatre awards. The previous year he received the Duka Duka for his contribution to the TV industry.

Mafela joined the entertainment industry at a young age and is now a noted actor, singer, writer, producer, director and businessman.

In 1964, when he was 22 years old, he played the role of an editor in the film Real News. A few years later he was cast in another film, uDeliwe, which he recalls as the production that finally gave him his “big break”. Many would impersonate his character, Peter Pleasure.

He caught up with the Mail & Guardian ahead of the Savanna Comics’ Choice Awards on August 15.

What sparked your interest in comedy and when did you realise that you wanted a career in it?
Nothing specific sparked my interest in comedy – I just knew from a young age that I wanted to be a comedian because that was what I was good at. I just thought to myself that this is what I can do, so let me do it.

Who were your influences when you joined the industry?
Wow, I can barely remember because that was about 50 years ago, but I had a lot of influences growing up.

You are a legend in comedy and are a noted actor, producer, director and businessman. What is your secret to surviving in the entertainment industry, which others have found to be difficult?
Well, it has been very hard. Particularly [when] I joined the industry, it was not easy at all. Surviving in the industry has always been a challenge and it required me to be really passionate to be able to pursue my dream. Moreover hard work with perseverance is what led to my success in the industry.

In your career you have received two other awards for your contribution to the South African industry. What does this new award – the Savanna Comics’ Choice Lifetime Achievement – mean to you?
It means a lot that my peers have acknowledged and value my contribution to the industry. I was quite emotional about it – when I heard that they wanted me to have this lifetime achievement award, because it portrays that what I have done over the years has been excellent. I had never really acknowledged it myself that I have contributed to the growth of the entertainment industry.

What would you say was the most profound project you have undertaken in your career? Many would argue that Sgudi ’Snaysi was the most successful. Do you agree?
I don’t know how to answer that because every project I have undertaken was very important to me. However, I do agree with those who believe that Sgudi ’Snaysi was the most successful, because it ran for 78 episodes and the character I played took a lot out of me and I still watch it and find it hilarious.

UDeliwe is also something I value [because] at that time in my life I could see my dreams coming true and I believe that was when I was fully recognised as prominent actor in South Africa.

What have you been busy with lately? Are you looking into acting or directing any new show?
I’m currently not involved in any acting or directing projects. However, I really love my acting. Although I enjoyed directing I believe that acting is what I enjoy doing the most, so my next project will involve me acting.

Do you have any words of wisdom to share for aspiring comedians, actors or directors?
Discover your God-given talent, pursue it and work very hard towards achieving it. It is also very important to go into the theory of the industry and read about it to understand further what its demands are. I have observed that a lot of actors and comedians today take the value of educating themselves for granted.

The reality of it is that you have to learn and read a lot about the techniques that you will require to actually be successful and when you have instilled that value within you, all you have to do is work even harder to make your dreams a reality.