Cops’ cocaine gone without a sniff 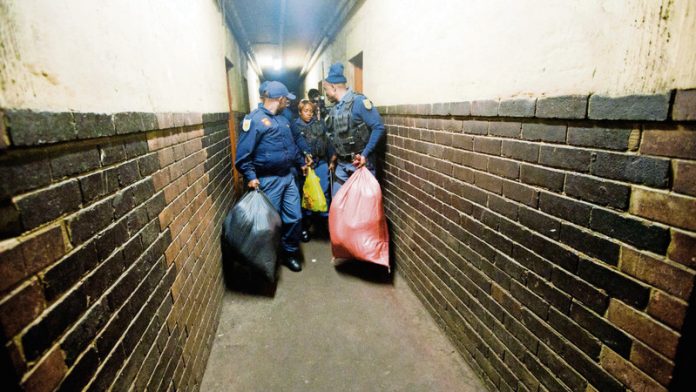 A leaked police report has disclosed startling details of how seized cocaine worth hundreds of thousands of rands has disappeared from the police forensic services division over a three-year period. Not a single officer has been brought to book.

The director of public prosecutions declined to prosecute in all cases because no suspects were identified.

The report reveals that 18 people were subjected to polygraph tests in connection with the missing exhibits, and that three of them were found to be “deceptive”.

Some of the narcotics disappeared within a day of being received, apparently from the case reception area.

“It should have been a simple matter of identifying the persons who had access to the area,” the report notes. In one case, the theft of two evidence bags by an officer was ­captured on CCTV. The evidence was then lost.

Time wasted
The report reveals that in one instance it took the division nine months to identify the disappearance of evidence bags containing suspected cocaine. In two other instances the case was abandoned because the prosecutor’s office took two years to instruct investigators to take statements from the relevant officer, who by then had left the force.

Elsewhere the report does not give exact quantities, merely referring to the disappearance of “a large quantity of cocaine” or “seven blocks of suspected cocaine”.

It also reveals that in December 2009 an exhibit of cash amounting to R41 650 vanished from the division in December 2009. No suspects were identified. The disappearance of exhibits took place between 2005 and 2012. But the report, by CPN Forensic and Accounting Services, was ­commissioned by national police commissioner General Riah Phiyega in 2013 and the findings submitted earlier this year.

‘Negligence’
In its criticisms of security arrangements at forensic services, the report notes that:

Large numbers of exhibits are stored for many years. Destruction can only take place on the instruction of the commanding officer of the investigating authority.

The report says “it is evident that not enough emphasis was placed on investigating when missing exhibits were reported. In all cases the negligence on the part of the member who handled the exhibits should be matters of concern.” It recommends that “an effective crime intelligence gathering project should be run … to identify the suspect/s involved in the theft of the drug exhibits.”

Other recommendations include the installation of an adequate CCTV system and restrictive fingerprint and other biometric access controls to all areas to prevent further theft.

Explanations
Police forensic services, which include laboratories, have been a regular target of criticism because of alleged corruption and inefficiency.

Lieutenant Colonel Tshepo Paul Shole, the archiving safe TB2 section commander, was among other high-ranking officers found to have neglected their duty in some of the cases of missing drugs. The archiving safe is used to store small exhibits received after analysis.

It says Shole should answer for the loss of the 1 392g of cocaine, because he identified the exhibits, which were placed in a utility bin and then moved.

“He should explain what happened to the exhibits,” the report said.

It could not be established whether Shole still works for forensic services and he could not be contacted for comment.

‘Unfortunate’ leak
The head of the division, Johannes Phahlane, declined to comment on the report when contacted by amaBhungane, saying that one of the conditions of the report was that it could not be disclosed to third parties.

Phahlane is suing Popcru’s Gauteng secretary, Steve Matsemela, and three other officers over Popcru’s allegations in connection with the Pretoria laboratory.

Police spokesperson Solomon Makgale said it was unfortunate that the report had been leaked, “in direct contravention of the conditions of the investigators”. He said Phiyega was awaiting responses from the parties and deciding whether internal or criminal investigations were needed.

Perhaps the most glaring investigative failure is in connection with seven blocks of suspected cocaine in two evidence bags that went missing in March 2008.

The report says that a certain Shawn Matjila was caught on CCTV taking the bags from a container and putting them inside the bag he was collecting. “The bags that Mr Matjila took was not done as part of his duties,” the report says.

The report says that Matjila was convicted in 2011 of stealing rhino horn from forensic services and sentenced to a jail term.

Speaking on condition of anonymity, inside sources said they were hopeful that Phiyega would implement the report’s recommendations and clean up the division.

“Corruption in the division has been going on since 2004 and Popcru has consistently raised it but management has not taken action,” one source charged.

Another alleged that some police officers were “working with the drug lords. Drugs that are confiscated as evidence often go back to the streets.”

Cops take their leaders to task﻿

Popcru: Outed Bosasa corruption but was never part of it

On Tuesday, Agrizzi detailed the events leading up to Vernie Petersen’s removal from the department of correctional services
Read more
National

​The public sector wage agreement is close to being a done deal, with 48% of workers represented by trade unions at the PSCBC supporting the offer
Read more
National

Not all members of the bargaining council are on board with the wage proposal, with Fedusa calling for more time to consult with members
Read more
Advertising
Continue to the category
Education