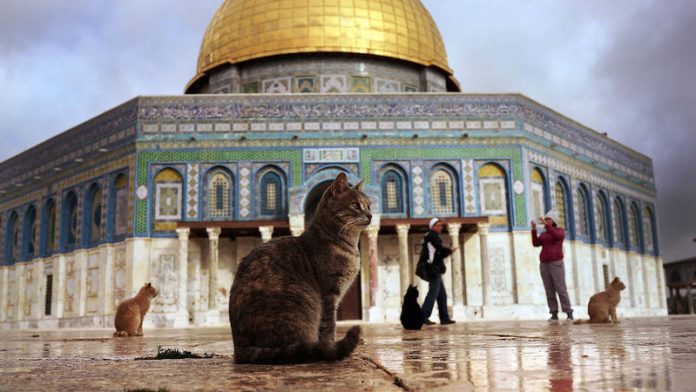 A Jewish activist group dedicated to controversially building a Third Temple in Jerusalem has launched a crowdfunding appeal to scientifically breed the perfect “red heifer”.

The creation of a Third Temple as a permanent house in which God will reside was prophesied by Ezekiel, and most orthodox Jewish authorities regard it as something miraculous. A minority, however, believe humans can build the temple.

An obstacle for the latter group is the belief that, because the world is impure, individuals wishing to ascend to the Temple must be cleansed with water mixed with the ashes of a pure red heifer that has been ritually sacrificed.

For decades, Jews subscribing to this belief have engaged in a painstaking, unsuccessful search for the miraculous red cow, in Hebrew, the para aduma. The most recent candidate was discounted last year. Now, however, the Jerusalem-based Temple Institute announced it plans to breed its own red heifer using surrogacy techniques.

The plans have sparked friction with local Israeli agricultural authorities and United States-based investors in a business importing Red Angus embryos (a breed of Aberdeen cattle) to raise for meat, after the activists appeared to have attached themselves to the import business.

The institute hopes to raise $125 000 for the red heifer project to pay for embryo implantation, care and identification of candidates to breed the perfect red heifer in Israel. The Temple Institute was founded in 1987 by Rabbi Yisrael Ariel. It has recreated artefacts for rituals required in a new temple; the red heifer would be the most ambitious.

Visits discouraged
Controversially, it has been active in encouraging its supporters to visit the Temple Mount, known to Muslims as the Noble Sanctuary, causing friction at the site. The more conventional view of orthodox rabbis is that Jews should not visit the site.

The cow is mentioned in the book of Numbers and other religious texts and has significance to strands of messianic Christianity and Judaism.

Jewish religious teaching holds that, between the time of Moses and the destruction of the Second Temple, only nine perfect red heifers were discovered. The 10th – according to the Jewish philosopher Maimonides, whose writings in this case the group adheres to – will herald the coming of the messiah.

The cow’s ashes, burned with fragrant wood and scarlet wool, are used to produce mei niddah – purifying water that allows people access to the temple’s most sacred places.

For messianic Christians, the red cow is also seen as a precursor to the building of the Third Temple, an act that would herald the “end times”.

In recent years, the Temple Institute has twice announced the discovery of the perfect red cow as part of a more conventional search, only to reverse its view.

In a video to launch the initiative – which has raised $22 000 in 12 days – Rabbi Chaim Richman, head of the Temple Institute’s international division, said: “… this project is nothing less than the first stage of the reintroduction of biblical purity into the world, the prerequisite of the building of the holy temple.

“For 2 000 years we’ve been mourning for the destruction of the holy temple; the future is in our hands.”

To that end, the institute announced in its publicity material, it had launched a scheme to import frozen Red Angus embryos to a cattle ranch in Israel’s Negev. All of which, it appears, is news to some in the company investing in a scheme to import the embryos from Texas and which, thus far, has produced only male offspring.

For while Negev cattle rancher Moshe Tenne has reportedly done a deal with the institute to allow access to the Red Angus project, others involved seem to have been caught angrily unawares, with some US donors to the meat-raising project threatening to withdraw.

“[The Temple Institute] didn’t bring over embryos, we did everything without thought of the Temple,” Yaakov Moskowitz, head of research and development at Ramat Negev regional council, told Israeli paper Haaretz.

Religious experts have pointed out a more esoteric and perhaps insoluble problem with the institute’s plans to make red heifers. Ritual requires the priest who sacrifices the heifer to be ritually pure as well. Lacking the mei niddah from a previous holy cow, that seems like a catch-22. – © Guardian News & Media 2015