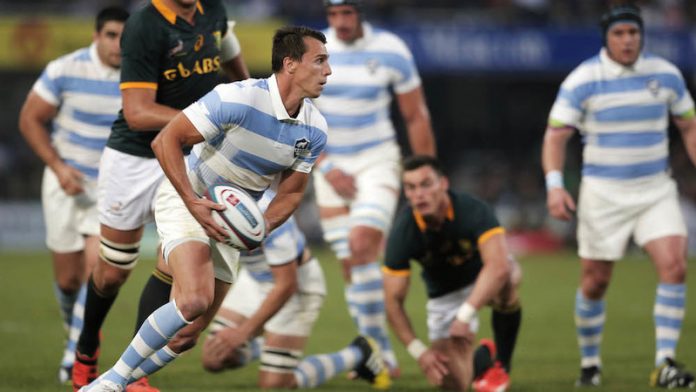 Some six years ago the wise men of Sanzar (South Africa, New Zealand and Australia Rugby) made a ground-breaking decision: the Tri-Nations would be expanded to include Argentina. To that end, in an effort to avoid one-sided contests, it was agreed that the Pumas would send a development squad to play in South Africa.

The Argentine Rugby Union sent a squad of home-based players to compete in the 2010 Vodacom Cup. Two months away from home took its toll and the Pampas XV, as they were dubbed, failed to make the play-offs. But the following year they were back with a vengeance and a much more streetwise squad. They cut a swath through the competition, winning all their games, including the final against the Blue Bulls in Potchefstroom.

Eight members of the team that won that final 14-9 at Olen Park were in the match 23 at Kings Park on Saturday for the greatest day in Argentina’s rugby history. They included the hooker and captain, Agustin Creevy, and man of the match Juan Imhoff, the left wing whose hat-trick of tries made it all possible.

To shine a spotlight on Imhoff’s achievement, in the 125 years that South Africa has been playing Test rugby, no one had ever scored a hat-trick against them.

There are times in sport when milestones pass unheralded, noted only by historians after the fact. But on Saturday there was a group of men at the stadium whose mere presence put the achievement into perspective. They were the class of 1965, members of the first-ever Pumas touring squad that played 15 games in Southern Africa in the May and June of that year.

Coached by Natal maverick Izak van Heerden, the 1965 Pumas played mainly against the minor unions and Country Districts sides, akin in some ways to the Pampas XV’s Vodacom Cup campaigns. But on June 19 of that year they beat the Junior Springboks 11-6 at Ellis Park, scoring three tries to two and putting their nation’s rugby on the map.

Black day for SA rugby
The flyhalf for the Junior Boks that day was SuperSport commentator Hugh Bladen. He told the Mail & Guardian: “It was a black day for South African rugby. The Boks lost to Australia in Sydney and we lost to Argentina. The coach was Piet Malan, who passed away recently, and I think we prepared thinking we just had to pitch up to win. In my opinion we had the better of the game, but missed about six kicks at goal. My lasting impression was, at the final whistle, the Pumas players went absolutely crazy in celebration.”

Among those celebrating on that day 50 years ago was a flank forward from the Duendes club in Rosario, José Luis Imhoff. On Saturday he was in Durban to watch his son score a hat-trick against the Springboks. Imhoff senior went on to coach the Pumas, and was also a cardiologist and specialist in sports medicine, as well as minister of public health in the province of Santa Fé from 1991 to 1994. The governor of the province at that time was Carlos Reutemann, a Formula One star driver in the 1980s with Williams and Ferrari.

We may use the Imhoff rugby family to make a statement about the game in Argentina. If June 19 1965 marked the beginning of an era, then August 8 2015 was the day it ended.

From now on, the Pumas can no longer be regarded as a second-tier rugby nation. Put simply, if they play like they did on Saturday they can win the World Cup.

It is not a frivolous claim. The draw has been kind to the Pumas, as it was to South Africa in 2007. They are in the same pool as New Zealand, which means they avoid having to play the All Blacks again until the final. Assuming the All Blacks finish top of Pool C, the Pumas can expect to finish second with wins over Tonga, Georgia and Namibia a relative formality. At the quarterfinal stage they would then play either Ireland or France at the Millennium Stadium in Wales.

Abundant European experience
Neither of those nations would relish the encounter, away from home against a side filled with players with abundant European experience and the ability to play like they did in Durban. Ireland are a good side, but may be on the way down after a period of dominance, and France have been a shambles for some time. They also have an extremely chequered history against Argentina.

In the event that the Pumas win their quarterfinal, they would, in all likelihood, face the last team standing from Pool A in the semis: Australia, England or Wales. On current form there is absolutely no reason they could not win against any of the three.

That would leave us with the final and a probable showdown against either the All Blacks or the Springboks, who are fancied to meet in the first semifinal at Twickenham.

Can Argentina beat either of those teams? Well, the All Blacks lost to Australia on Saturday in the current world champions’ poorest display since 2011, and we all know what happened at Kings Park.

This weekend the Pumas host the Springboks in Buenos Aires in the first game of their new era and, for the first time, we can say the Boks enter the game as underdogs.