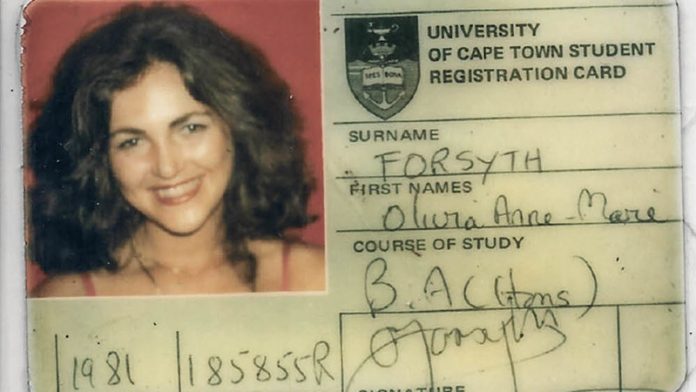 The front page of the July 31 edition of the Mail & Guardian showed a teaser for a story inside under the headline The apartheid spy who shagged almost everyone, with a photo of the woman in question, Olivia Forsyth. Assuming a woman’s sex life is fair game, the article inside the paper provided no evidence to back this sensational claim up and instead took up the reins of a slut-shaming bandwagon.

The article, headlined Scant sauce in ‘honeypot’ memoir, reviewed Forsyth’s forthcoming book, Agent 407: A South African Spy Breaks Her Silence. The blurb read: “An ex-police agent who masqueraded as a student activist has dished the dirt, but it isn’t very dirty.”

Phillip de Wet, who reviewed the book, seemed deeply disappointed with it. According to him – and “salacious 1980s gossip” – Forsyth “shagged almost everyone”, yet failed to “dish the dirt” in it. This didn’t stop De Wet from taking the reader through a lascivious account of the “dirt” and how thwarted he felt to be denied more sauce on it.

The book, he wrote, failed to provide detail on her spy duties, including her role in police raids. These incidents took place during apartheid’s most violent period and led to many people’s lives being destroyed.

But De Wet seemed most excited by how much sex Forsyth allegedly had, and disappointed when he couldn’t pin down the exact amount. His descriptions swung from Forsyth having sex with “everyone” to there being only “some [who] had been literally intimate with the enemy”.

He didn’t know whether there really was a “lapel button” for those who hadn’t had sex with her. But what he did know is that, “in the second half of 1988, there was at least an imaginary badge of honour bestowed on some in leftist circles at Rhodes University, reading: ‘I did not sleep with Olivia Forsyth’.”

Forsyth said she was not allowed to exchange sex for information. Yet De Wet appeared overwhelmed with relief when, in the book, the “no-sex promise is mercifully broken with the revelation that sex did play a role in her journey from apartheid spy to ANC collaborator-cum-detainee”.

According to De Wet, only two groups of people would be keen to read the book: “those checking to see whether they were kissed and told on, and those looking to see who of their comrades can be made fun of for having fallen prey to the apartheid honeypot”. Both, he said, would be disappointed.

How Forsyth might have used sex to gain information, an interesting detail to some, is not included in her book. These are simply rumours and, without adhering to journalistic principles, De Wet treated these rumours with mirth and mockery.

Was the fact that Forsyth was a spy whose actions put innocent people in jail – and who now appears to be on a public relations drive – not enough of an angle? And if you decide that an apartheid spy’s sex life is news, why not find at least one interviewee to provide the gritty evidence of this?

De Wet’s handling of the piece was not the only aspect of it that angered several M&G staff members.

De Wet and those who commissioned and edited the article reduced Forsyth to a vagina on legs, worthy of being listened to only if she “dished the dirt” on how she used her body to put innocent people in jail. Without providing evidence of how her sex life buttressed the apartheid regime, they invited the reader to suspend any critical thinking and trust a sniggering De Wet.

More dangerously, they carelessly used loaded phrases such as “badge of honour”. This is reminiscent of rape culture, in which men are celebrated for having sex with a woman – irrespective of whether or not she consented.

Herein lies the core concern: it was too easy for the male journalist and the editors who produced this misogynistic article to punt an unsubstantiated story about a “slut” in a patriarchal way, rather than produce an accurate review of an apartheid spy’s book.

They failed to truly consider the privileged position from which they work: they are men in a society that mercilessly sexualises women – and then crucifies them for acting sexually. If the protagonist had been a man, the story would probably have been handled differently.

The greatest irony is that focusing on Forsyth’s sex life did not highlight the terrible things she did as an apartheid-era spy – one of the intentions behind the story, according to the people who produced it. It simply shone a spotlight on their bigoted male politics.

Victoria John is an education reporter for the M&G