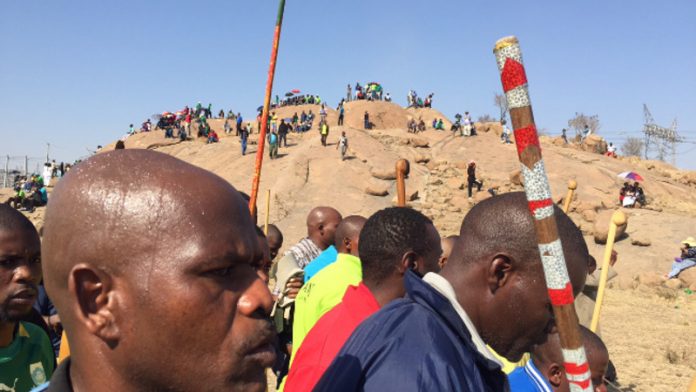 Exactly three years ago today, 34 striking miners were shot by police in Marikana, and 10 more people were killed in the week leading up to the tragedy.

Last week, the families of the miners killed at Marikana filed a civil case against the minister of police claiming compensation for their loss. And they are not stopping there.

Speaking at a commemoration event in the North West on Sunday, Advocate Dali Mpofu said they had started with claims of 336 injured miners for over R1-billion. These claims had to be filed before three years had elapsed, and they would follow up with more claims before October.

“The first will be a claim against [Deputy President Cyril] Ramaphosa. Then we will put in a case of over R1-billion against Lonmin for refusing to speak to workers before the tragedy.” He did not specify what the claim against Ramaphosa would be.

He said they would also apply for a review of the Farlam commission of inquiry’s report as they did not agree with the findings.

After that, they plan to take on the president.

“We are also going to open a case of defamation against President Jacob Zuma, who has said time and again that the miners were killed because they were murderers,” said Mpofu.

Mpofu said once they had completed the civil cases, they planned to open criminal cases against 12 people, whom he termed the “dirty dozen”, which include Ramaphosa, former police minister Nathi Mthethwa and national police commissioner Riah Phiyega for their part in the massacre.

They hoped to conclude these cases timeously, he said.

“Workers cannot spend another three years in courts testifying for what is due to them. Government must pay.”

Advocate Dumisa Ntsebeza, who represented the families of the victims at the commission, said the Farlam commission’s report was a disgrace.

On Sunday, the lives of the 34 miners were remembered by thousands of miners, dignitaries, political leaders and community members on the koppie where the miners were killed.

A new name – widows
While Zuma has asked for government to be given the time and space to implement the recommendations of the Farlam commission, opposition parties, widows and the children of those killed in Marikana believe three years without closure is simply too long.

While the widows and children remembered their breadwinners and the events leading to their deaths, politicians used the day to promote their affiliations at the Rustenburg event.

The wives of the men who died said they had been given a new name — widows — by police commissioner Phiyega, while the children speaking at the event said it was a day they would never forget.

Economic Freedom Fighters leader Julius Malema, claiming Marikana as part of their party, said at the time of the strike in 2012 police and political leaders had not wanted anyone to speak to the miners, and had labelled them criminals and murderers.

At the event organised by the Association of Mineworkers and Construction Union, Malema said the cases of those who had died before and after August 16 should be treated as criminal, while the “massacre was political”.

In a message of support at the event, United Democratic Movement’s Khanyi Litchfield-Tshabalala said miners died for R12 500 and said they were there to reassure the people that they would continue the fight started by the victims. She said miners in the Australian Lonmin mines earned 10 times more than the R12 500 demanded by the victims.

Democratic Alliance leader Mmusi Maimane called again called for the dismissal of Phiyega and Mthethwa, and said those responsible for the massacre should be held accountable.

‘Insult’
“It is an insult that those widows and family members have had to approach the courts this week to seek compensation for the loss of breadwinners. Their government has abandoned them.

Maimane said the families of the dead should not have to endure the trauma of a long court action to obtain the justice they deserved.

He called for the president to pay back the money spent on his Nkandla homestead and for it to be used to build houses in Marikana.

Zuma called for the lives lost to be remembered with dignity and unity.

The presidency said in a statement that government was taking the recommendations of the Farlam commission seriously and asked for space to work on a comprehensive implementation process.

Amcu called for the day to be declared a public holiday. They also called for Lonmim to remove the women from the mines and employ them as clerks or pay them while they are home as they were vulnerable underground.