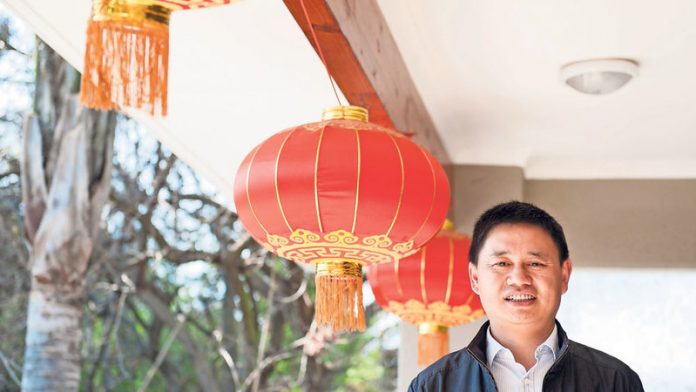 Lyu Jiangao, director of the new Confucius Institute at the University of Johannesburg (UJ), laughs off criticism that adding Mandarin to South Africa’s school curriculum is akin to a new form of colonisation, but concedes it is a calculated tactic to inculcate a know-ledge of Chinese culture in the country’s citizens.

“Actually, we don’t agree,” he says in response to China’s critics and breaks into brief but cheery laughter.

“We don’t think it’s like what some critics make it seem.

“When we arrive here, we really find it necessary to promote a mutual understanding between the two countries and their people. It is true that a lot of South African people don’t know much about China and vice versa.

“But South Africa and China are both Brics [Brazil, Russia, India, China and South Africa] countries and, also, China is the largest trading partner of South Africa.

Lyu was posted to South Africa in October to steer the ship at the Confucius Institute. He sat down with the Mail & Guardian at the institute this week, against the backdrop of news that the South African government is to introduce Mandarin as an optional language in schools next year.

A professor of law, he remains an employee of Nanjing Tech University, where he was appointed school director in 2012. But he took the post at the urging of Hanban, a Chinese government agency that runs more than 400 Confucius Institutes at universities across  the globe.

The institute at UJ is run in partnership with Nanjing Tech, according to Hanban’s requirements, and was opened after UJ vice-chancellor Ihron Rensburg signed an  agreement with the Chinese in July last year.

UJ became the fifth South African university to have a Confucius Institute, following in the footsteps of Stellenbosch University, the University of Cape Town, Rhodes University and the Durban University of Technology.

There are 42 Confucius Institutes across the African continent.  Lyu stresses that the UJ institute focuses on teaching Mandarin and promoting Chinese culture.  “We now have 150 students who do Mandarin here. We offer Mandarin to UJ students, staff, the public and schools nearby. The main task of Confucius Institute is to promote language and cultural exchange,” Lyu said.

“Some students just want to find a job in China after graduating.  “Also, learners from school want to further their education in China. So we provide this kind of help to meet this demand. At the end of this month I’m taking some engineering students [from UJ] to China as part of a cultural exchange [programme].”

Chinese artist
Lyu’s face lights up when he talks about the art exhibition of Nelson Mandela paintings by Chinese artist Li Bin that the institute hosted earlier this year.

“It lasted nearly three weeks,” he says with evident enthusiasm.

“A lot of people, including VIPs from the government, such as former president [Kgalema Motlanthe], the premier of Gauteng [David Makhura] and the mayor of Johannesburg [Parks Tau] came to visit. This is the kind of cultural exchange we do.”

The South African government’s move to encourage pupils to learn Mandarin has been blasted by the ANC-aligned South African Democratic Teachers’ Union, which denounced it as a new form of colonisation.

But Lyu uses the same argument as the basic education department — that learning Mandarin would help South Africans gain access to the abundant economic opportunities China has to offer.

Two things are important for  teaching Mandarin in South African schools, he says: textbooks and teachers.

“My suggestion is that they should use textbooks with both Chinese and English. If it’s totally in Chinese it’s going to be hard, especially for the beginners.”

The institutes are named after revered Chinese philosopher Confucius, whose ideas have fundamentally shaped the country of his birth for about 2?500 years. In keeping with this, the institute’s Lyu evidently has to take a philosophical approach when it comes to his UJ students.

He invited the M&G to a lecture after our interview, but not one of the 40 tourism students who were meant to attend turned up.

Just how effective are the Confucius Institutes in promoting China’s soft power, its culture and language, in South Africa?

A newly released empirical paper by an academic based at the London School of Economics has delved into this question. Maddalena Procopio, a PhD candidate in international relations, concludes that the institutes “are only partially effective as a tool providing support for China’s rise”.

This is largely because South African university executives are suspicious of the institutes’ aims and don’t take them seriously, despite allowing them to set up base.

Unlike in South Africa, where universities maintain their autonomy from the government, Hanban — an agency of the Chinese education ministry — controls the Confucius Institutes.

Procopio wrote: “The confusion and suspicion over the bureaucratic system to which Confucius Institutes are subjected and are part of, and the awareness that there exist norms of conduct when it comes to teaching content and practices, seems to translate into a nuanced trust as opposed to a complete trust towards the Chinese management that could, in turn, act as an obstacle to further developments.”

But what, then, is driving  local universities to open Confucius Institutes?  “There is the attraction of receiving financial, textual and human resource assistance from the Hanban to set up and run the institute,” Procopio wrote.

“The budget submitted to the Hanban includes activities carried out throughout the year, including trips to China by staff and students.”

The Confucius Institutes are considered suspect in many countries.

They have faced a barrage of espionage claims in the United States, which led to an official investigation last year.