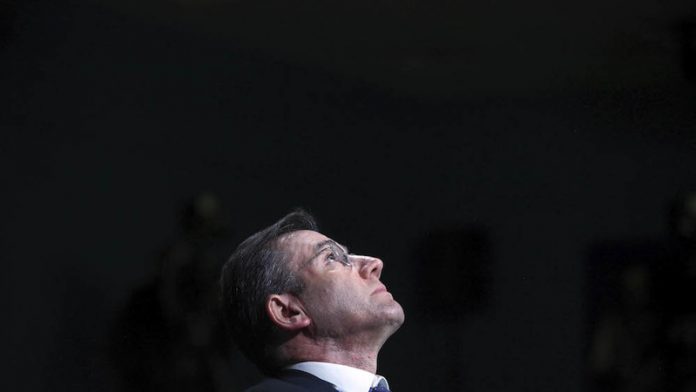 The Chinese metals market is a puzzle, according to Glencore’s billionaire chief executive officer, Ivan Glasenberg, after reporting that a slowdown in the world’s biggest commodities buyer had helped to cut the company’s first-half profit by 56%.

“At the moment, none of us can read China; it’s a very difficult market to read right now,” Glasenberg, who controls an 8.4% stake in the company, said in a phone interview in London on Wednesday. “It’s surprised a lot of us. A lot of the infrastructure and projects they had on plan did not take place.”

Glasenberg, an accountant turned coal trader, is steering the company through the strongest headwinds since the Swiss commodity trader’s $10-billion initial public offering four years ago. The stock has slumped more than 60% since then. China’s economy is expanding at the slowest pace in a quarter of a century and raw material prices are at a 13-year low.

“China, definitely, the first half was a lot weaker than anyone expected,” Glasenberg said. “It’s getting harder to predict what Chinese consumption is going to do for our metals.”

Glencore has slid 40% this year to make the $36-billion Swiss company the worst performer on the United Kingdom’s FTSE 100 Index. It slumped to a record low this week in London after reporting the drop in first-half profit. The company cut its full-year earnings forecast for its trading division. It also outlined further spending reductions.

‘Going to disappoint many’
Glasenberg is paring debt in a bid to maintain dividends and preserve an investment-grade credit rating. “We have got a worsening situation right now,” John Meyer, a mining analyst at SP Angel Corporate Finance, said in an interview with Bloomberg Television. “Glencore, I think, should have performed a little bit better through the first half. This is going to disappoint many. The metals trading didn’t do so well. China really slowed down. It totally hit a wall.”

China uses about 40% of the world’s copper supply and half its aluminium. Falling prices for both materials have helped cut earnings for metals traders.

Adjusted net income declined to $882-million in the six months to June 30, from $2.01-billion a year ago, the company based in Baar, Switzerland, said in a statement on Wednesday. That beat the $711-million average of seven analyst estimates compiled by Bloomberg. It will pay a dividend of six cents a share.

Adjusted earnings before interest and tax from its trading business, which includes the sale of commodities from crude to copper, fell to $1.07-billion. That compares with the $1.28-billion average estimate of nine analysts surveyed by Bloomberg News.

Glencore reported a 56% slump in first-half profit as its trading unit failed to offset a Chinese-led drop in raw-material prices. “Markets are weak,” Glasenberg said. “China in the first half was a lot weaker than anyone had expected.”

In previous years, Glencore had cushioned the effect of lower commodity prices through its trading business, the world’s largest at a public company. But, in the first half, trading was weak because of what the trading house said was a “collapse” in the premiums that traders are able to charge clients for the delivery of metals such as aluminium and nickel.

The company cut its full-year forecast for the trading business to $2.5-billion to $2.6-billion, down from the $2.7-billion to $3.7 billion, it announced in December.

‘Fixating on the risks to growth’
“The first half of 2015 was another challenging one for commodities,” Glencore said. “Financial markets continued to fixate on the risks to global growth, against a backdrop of a stronger United States dollar.”

After writing down the value of assets, Glencore reported a net loss of $676-million, compared with a profit of $1.72-billion a year earlier. Glencore is defending its coveted investment-grade credit rating and dividends by lowering expenditure and selling some assets.

The company last week said it is trimming this year’s spending plan by as much as $800-million to $6-billion and selling $290-million of mines. In addition, on Wednesday it said its capital investment next year will be capped at $5-billion. Heath Jansen, a mining analyst at Citigroup in Dubai, described the cuts in spending as “a positive”.

The company cut its net debt by $982-million in the first half to $29.6-billion, more than analysts had expected. It impaired the value of its oil assets in Chad by $792-million after paying $1.35-billion last year for them.

Glencore investor Harris Associates, one of the biggest shareholders in the commodity trader and miner, is betting that this year’s worst performer on the UK’s benchmark stock index will recover.

Harris increased its stake to 4.5% by buying shares in the past 30 days as Glencore tumbled, said David Herro, the chief investment officer for international stocks.

Harris is now Glencore’s fourth-largest shareholder with a stake worth about $1.6-billion based on Tuesday’s closing price. It owned about 1% as of June 30, according to public filings, and hasn’t previously disclosed its increased holding.

“We like their copper position, we like their trading position,” Herro, who manages the $29-billion Oakmark International Fund, said in a phone interview. “Their other metals don’t seem to be anywhere near as impaired as iron ore. They are well positioned.”

“It’s one of the only stocks that’s up today so maybe the market generally has taken the view that is a signal.” Glencore shares are near a bottom, Rob Clifford, an analyst at Deutsche Bank AG in London, said by phone Tuesday.

At the weekend, the Telegraph described Herro as an activist investor building a stake to pressure Glasenberg, but Herro denied this.

“We have not invested in this as activist shareholders. We have made this investment as long-term value investors. The business at this price is substantially undervalued. We are a long-only value shop.” – © Bloomberg