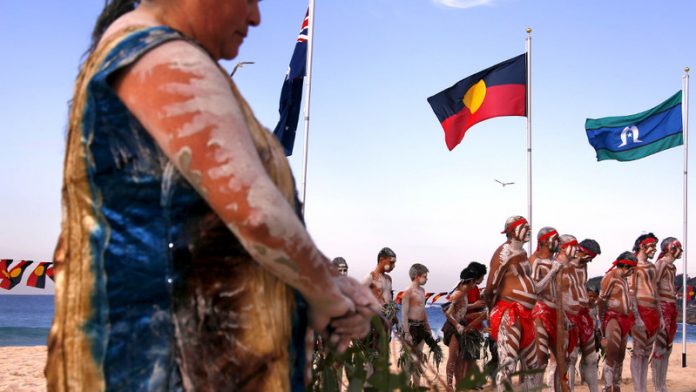 When I was a boy, my grandfather, a Kamilaroi man from western New South Wales, used to tell me to look around. “This is your country,” he would say. “They haven’t taken it away from us.”

This was his small protest, an act of defiance. In the same way he would tell me I didn’t have to salute the flag, or stand for the anthem. He planted a seed of questioning, wondering: Why were things the way they were? What put us here on the fringes of society? What made our people outcasts in a land that was ours?

My grandfather understood something very simple, very basic and very human: this was his land, his place, a place his people had made theirs for tens of thousands of years. Except this was not his anymore, not according to the law.

From the moment a British flag was placed in this soil, all rights were extinguished for the hundreds of nations that existed here. The Wiradjuri, the Bundjalung, the Arrernte, the Pitjanjatjarra, the Gunditjmara, the Paredarerme had never seen a white man but they were now subject to his law.

And to the British, these nations, people with their distinct languages, customs, laws, their etiquette, their interconnected trade routes, their song and dance and art, were simply invisible: they did not exist. This was the doctrine of terra nullius, proclaiming this an empty land and free to claim uncontested for the crown.

It didn’t have to be this way. The rights to land of native people had been recognised for hundreds of years. Throughout the British colonies, the laws and cultures of the local people were acknowledged under common law. This was the case in Africa, North America and New Zealand. So why not here?

The great European age of discovery brought with it theories of human origins and development that placed Europeans at the top of a hierarchy and posited the so-called savages and primitives at the bottom. Celia Brickman, in her book, Aboriginal Populations in the Mind: Race and Primitivity in Psychoanalysis, says the term “savage” itself places its subject in the realm of nature not culture, and “primitive” referred to people at the very threshold of the transformation from animal to human.

Christianity identified black-skinned people as the descendants of Ham, the banished son of Noah. Science developed notions of humans as animals with rank according to colour. Later, the skulls of Aboriginal people would be studied for alleged proof of our primitive minds and lack of civilisation.

In the century after settlement, the publication of Darwin’s On the Origin of Species and the growth of the study of anthropology would entrench popular notions of Aboriginal inferiority.

When I was a young journalist, a story caught my eye of a man, like my grandfather, who didn’t believe what British law, now Australian law, said about him. Eddie Mabo was from Mer in the Torres Strait and, armed with a legal team, had brought a case all the way to the high court to prove that we were here, we had an inheritance passed down over millennia, and that it was time to vanquish the myth of terra nullius.

I recall telling an incredulous news director that this could be a moment of history. I covered that first day of hearings. There were to be many more. Mabo would not live to see the judgment, but more than 30 years later, a prime minister has made a pilgrimage to his grave and described it as a sacred place for all Australians.

Mabo’s victory changed us as a nation. But if terra nullius has been struck down as a legal concept, it lives still in our minds, our hearts and our Constitution. The man dubbed the father of reconciliation, Patrick Dodson, said to me recently that recognising indigenous people in the founding document of the nation would complete Mabo’s battle to bury terra nullius.

This is a chance to ask who we are as a nation. To remember that, we have a dark legacy of denial and injustice. To remind ourselves that when footballer Adam Goodes is taunted as an “ape” that we haven’t yet cleansed ourselves of 18th century notions of indigenous people as savages and primitives.

My Sky News colleague Paul Murray suggested that we celebrate Mabo with a national day. Yes, and on that day I would remember too my grandfather who taught me that this was, is and always will be Aboriginal land. And you are welcome too. – ©?Guardian News & Media 2015

Stan Grant is from the Wiradjuri tribe and is the international editor of Australia’s Sky News.

Australian Prime Minister Tony Abbott has praised indigenous land rights campaigner Eddie Mabo for “having a go”, during a trip to the Torres Strait.

Abbott visited the island of Mer this week to attend the grave of Mabo, whose land rights case led to the landmark high court decision in 1992 upholding native title.

“It’s a very moving place to be, because this was a warrior, not simply a strong man physically, but a strong man culturally and spiritually, who decided that he would take on the legal establishment,” the prime minister said.

“He would take on the previously settled view of Australian law – and good on him for having a go, and ultimately good on our system for being able to accommodate Eddie Mabo and the other plaintiffs’ cry for justice.”

The current Labour leader, Bill Shorten, said he is pleased Abbott had visited Mabo’s grave. “I hope now this is growing recognition that Eddie Mabo was a great Australian and that that decision was important, another step forward to effecting full reconciliation between aboriginal and Torres Strait islander Australia, and the rest of Australia.”

Abbott, who promised to spend a week each year in a remote indigenous community, said the Mabo decision was “very contentious two decades back” but was now “absolutely accepted by all Australians”.

“Indigenous people are about 3% of our population and I think it’s fair enough that a prime minister should spend about 2% of the year in a remote part of Australia, focusing mainly on indigenous issues. – Daniel Hurst ©?Guardian News & Media 2015