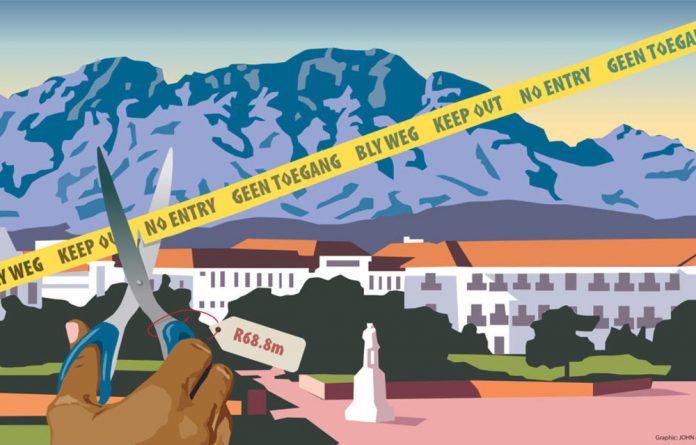 On August 7 Stellenbosch University announced it would be investing R68.8-million in the diversification of its staff. This is the latest of the university management’s response to Open Stellenbosch’s demands for transformation.

Open Stellenbosch is a movement for social justice, working in our institution towards effecting positive change in Stellenbosch and the greater community.

We welcome all attempts to transform Stellenbosch University. However, we refuse to be taken in by easy victories, measured out in quantitative compromised positions. There are several respects in which this latest announcement either misses the mark, or may even be misleading and insidious.

Open Stellenbosch finds it necessary to deconstruct the notion that the barrier to staff diversification is primarily funding. Such a notion reflects the rhetoric often peddled by management – that black academics leave universities for the corporate sector over higher pay.

If funding was the operative force in staff demographics, then one would have expected Stellenbosch, which is among the richest universities in South Africa, also to be the most diverse. Yet it lags decades behind, for instance, Wits University and other comparably well-endowed institutions. It is highly problematic to assume that black academics are primarily interested in money.

We must start by asking about institutional culture. How, for example, is a “black staff corpus” expected to work in an institution where everyday correspondence, including important faculty meetings, is often not available in English?

We have to ask whether Stellen-bosch has created an enabling environment in which black academics would want to live and work. At present, the answer is categorically no. It is Open Stellenbosch’s belief that untransformed, racist institutional culture is the root of the problem of staff diversity.

It is important to draw attention to management’s claim: “In 2014, permanent black, coloured and Indian (BCI) employees at [Stellenbosch University] made up 43.2% of the university’s staff corps compared to 37.6% in 2008.”

These figures for permanent black staff include every permanent employee of the university: security guards, maintenance and cleaning, administrative staff and other jobs not associated with intellectual labour. It is no surprise then that the university has chosen to focus on this group, conveniently labelled “BCI”.

When we look at research and instruction staff, the numbers

are a much more serious concern. Only 25.69% of research and instruction employees are currently BCI, to say nothing of the figures as they relate to senior lecturers or the professoriate.

More importantly, the number of white staff in research and instruction has increased in both absolute and relative terms since 2008.

The percentage of black staff in research and instruction has been in steady decline since the university accelerated its employment of white research and teaching staff in 2004.

The importance of staff diversity in academia cannot be understated. What we are fighting for is not synonymous with job creation. Creation of job opportunities for black academics is valuable in itself.

A university, however, is much more than an employer. It is a public institution, which performs a public function. It is therefore part of the fabric of our country. It is only through diversifying academic staff that we will be able to broaden the contexts of what is taught and how it is it taught – curriculum reform.

Black academics are necessary if black alternative voices are to find a space in the intellectual landscape of our country.

Furthermore, diversifying academic staff is the only way that we will be able to create spaces where students – black and white alike – are able to see black people not only as consumers or administrators of one kind or another, but also as agents of knowledge production.

If management regards the category of permanent BCI staff as the goal-setting category, then how is this R68.8-million going to be spent? We need assurances from management that this money will not simply be used to hire black staff who remain in manual labour or in positions that correspond to their historical marginality.

At any rate, such a move provides a scapegoat for the university to hire more white intellectual labourers while still reaching their goal of transformation. As long as they remain behind their security doors in the admin building, pushing money at transformation issues, management will continue to be seen as anti-transformation.

To understand institutional culture and how it works, management is going to have to open itself up to conversation with marginalised groups on campus.

Open Stellenbosch will continue to propose terms of engagement, which, it is sad to note, have so far been neglected.

Mohammad Shabangu is a spokesperson for the Open Stellenbosch movement

Plan to diversify staff in next three years

Stellenbosch University stated earlier this month that it would be investing in the “diversification of its staff corps” over the next three years because it is now “focusing on transformation with a sense of urgency”, according to its press statement.

“We are intent on making our institution more inclusive and accessible. By setting funds aside specifically for a more diverse staff corps, we shall be able to attract and develop the required human resources,” vice-chancellor Wim de Villiers said in the statement.

The university has made good progress towards greater diversity in the composition of its staff corps, “but, as with other universities, senior academic appointments remain a challenge”.

It attributed this to the “serious countrywide shortage of human resources from the designated groups, as well as the attractive remuneration packages offered by the private sector and the state”.

Last year permanent black, coloured and Indian employees at the university made up 43.2% of the university’s staff corps compared with 37.6% in 2008.

“So, the trend is upwards, but [the university] will have to accelerate its pace to reach its goal of 53% by 2020.” The statement said the funds would be used in the following ways:

• Senior professionals from the designated groups – especially academics, but also professional support staff – will be recruited and appointed; and

• Current Stellenbosch University staff members from the designated groups will be afforded development opportunities to become upwardly mobile, for example from lecturer to senior lecturer and on to professor. – Victoria John