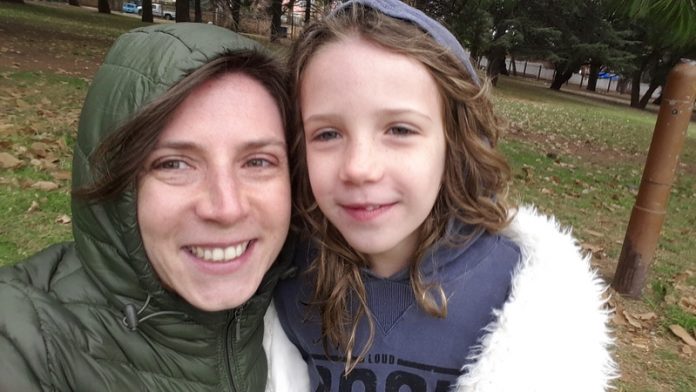 Sometime in the next year, I will get on a plane to London to meet a man I met on the internet. It’s not what you think …

Let me take you back 38 years or so to when my mother was a young, unencumbered woman living in the UK, who found herself pregnant by a lovely man who she had no intention of marrying.

She moved back to South Africa to be near her parents, and told my father that she was very happy with her situation, and that she didn’t need his help or support. And that’s how things went on for about 30 years, until I had children of my own.

As any proud grandmother would, my mother sent a photo of her new granddaughter to my father through a mutual friend. He quite liked the idea of his grandchildren, and over the next few years, we began to correspond (with actual letters, because he doesn’t do email).

Then, earlier this year, my father suffered a stroke, and his girlfriend got in touch to prepare me for the worst. But then he had turned a corner, and while my father will still need a great deal of home support from the mindblowingly awesome NHS, he’s now expected to keep on for a good while, at least.

At some point in all of this communication, my father’s girlfriend asked me if it would be alright if my cousin Harry got in touch. Cousin Harry? News to me! But being a sociable person, and having some genetic investment in the relationship, I said yes.

So Cousin Harry got in touch. And he is the tip of the iceberg really. He is one of three siblings (my father’s nephews and niece). He has six (yes, six) children of his own. All of a sudden, my family tree — which looked rather desolate on the paternal side — was flourishing and verdant.

We connected via Facebook, and I was treated to a wealth of photographs of my cousin and his children. We both confessed to scrutinising each other’s photographs for family similarities. I find them, like little unexpected gifts, in his daughters’ smiles and freckles and cheeks and eyes.

Looking a little like someone else is only a part of the family puzzle though, and Harry and I got to know the people we are better over email.

We are not much alike. He is 10 years older than me. He is a Christian, I am not. He heads up a marriage trust, I think divorce is a blessing.

And yet, somewhere in the discussing and dissecting, there are little threads of commonality.

We enjoy language (he has written a book, I write all this other stuff). We both have a sense of humour. And every time that I prodded the elephants in the room — gay marriage, feminism — the elephants dematerialised in puffs of moderate, considered, gentle opinion that made it clear that our fledgling relationship would not be trampled by dissent.

“We, of course, are perfectly balanced,” he tells me in response to some debate that saw us meeting in the middle. I agree.

We exchanged anecdotes about our shared family. My repertoire of family stories is naturally fairly limited, but I was able to dredge up some tale about my paternal grandmother living in Hampstead in an apartment full of cats. This gave Harry pause. His granny is my granny. We are directly linked on that branch of the family tree. The ground beneath us shifted, bringing us closer together.

He told me of Sunday lunches with that grandmother and her cats, when she would roast a lamb for Harry and his brother, and then roast two extra chickens, just in case. There was a snag of familiarity. I cater like that!

My mother had always said that she was astonished at how much I reminded her of my father’s family. With no influence at all, they have managed to contribute something to the person I am. And here, made manifest, are the threads of familiarity that my mother has always observed, weaving themselves into a complete picture.

This is like me — effusive, expansive, welcoming. “I will!” I said, utterly determined to.  Because while Harry and I are worlds apart, there are ties that bind us — a DNA helix with some shared genes and the common thread of interest about how these genetics shape our identity.

That common grandmother — the woman with the cats — gave birth to sons who produced us. There is shared history here, even if it is mostly unknown to me. Unknown family are the ultimate test of our own beliefs about identity — what shapes us, what makes us who we are, and why should Harry and I give a damn about each other?

He fills in a half a world of blanks for me. I, for him, just one blank (or three, if you count my children). But we both relish the opportunity to replace those empty spaces with an understanding of the people who fill them; and for this reason, we’ll pursue our relationship — our cousinhood — across continents, notwithstanding the rand-pound exchange rate. And of course, my father will be there too.

Meeting Harry has been a refreshing reminder to me that family is important. In a world and at a time that encourages insular relationships, it’s been reassuring to be shown that family is a part of the essence of every person. And of course, a sense of family can be established among those you choose to love (adoptions and marriages bear testimony to this) but at the same time, there’s no denying the connection between people who share the same DNA or granny, even if you’ve only just discovered their existence. I can’t wait to join the next lot of dots …

'Leaders can push people through, through their vision and inspiration, based on their exemplary actions'
Read more
Advertising
Continue to the category
Africa