Teacher brings all of herself to the classroom 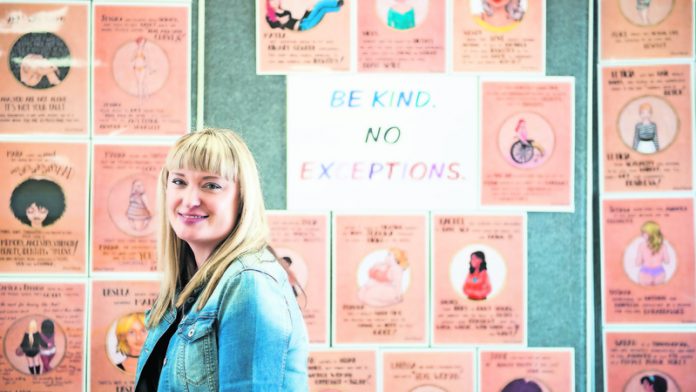 When the matric dance at a Johannesburg school rolls around each year, teacher Lesley Wright takes her wife as her date.

For some this seems like the achingly obvious thing to do, but to many lesbian, gay, bisexual, transgender, queer, intersex (LGBTQI) teachers working at schools where they feel they have had to hide their sexual orientation, this is a brave move.

She teaches drama for grades 10 to matric at Redhill School in the northern suburbs and when she walks into her classroom every morning she brings her whole self.

“I take my wife to the matric dance; I showed my classes my wedding video, and both staff and pupils threw me parties before my wedding, with rainbow cake.”

Women make up the majority of teachers at South African schools and the expectations imposed on them by an ideologically conservative society are the same as those imposed on women generally: to present themselves in a traditionally feminine way, and play a compassionate and nurturing role.

But Wright rejects these expectations and for her relationship, her identity as a woman, her job, her pupils and her school, it works.

Once a professional actress, the 39-year-old moved into teaching drama 13 years ago.

“I encourage critical thinking about race, class and gender and drama lends itself to discussion about these issues,” she says.

Generously, Wright has also let her relationship be a canvas for learning.

“A lesson once led to questions about my relationship and how my wife and I plan to have children, and I was quite happy to answer a particularly inquisitive child’s questions about this.”

Her school prides itself in being inclusive in all ways so digressions like these are not frowned upon as they may be at other schools.

Wright also disrupts stereotypes for how LGBTQI people present and identify themselves, and sends a clear message to her pupils that sexuality is fluid, and should not be forced into a box.

Although “queer” does not capture her sexual identity fully, it certainly comes the closest so if she had to, that is the label she would choose for herself.

Explaining her choice, she says she dated men for most of her life until a few years ago, when she first fell in love with someone who happened to be a woman. After that relationship ended, she met the person she would later marry — also a woman.

“After years of relationships which just never worked well, it was refreshing to be with someone where I felt totally loved.” She married her partner in February.

Together and as individuals, they reject stereotypes around appearances, such as that of women in same-sex relationships presenting themselves in a “butch” way.

“Most days I present as a ‘femme’ woman, but other days not. Sometimes I feel feminine and sometimes I don’t — it shifts all the time.

“I’m certainly not bound by what I once heard poetically referred to as ‘the straitjacket of performed femininity’, and I think that generally the concept of femininity — as with masculinity — has been used to confine, rather than free.”

Her willingness to live and talk her truths has created a classroom atmosphere and reputation in her school that lives up to the “Safe Space” label she has on her classroom door.

Last year a group of disgruntled grade 11 girls used that space as a platform to take visible, feminist action over an aspect of their schooling.

“They were unhappy with an aspect of the uniform code, which is quite gender-specific, and I encouraged them to disrupt this by wearing whichever parts of the uniform they chose.”

Few staff members even batted an eyelid, she says with a laugh.

Several pupils have also turned to Wright to talk about their sexuality and Wright “felt proud that they felt comfortable enough to talk to me about what was going on for them”.

“If I make the journey easier for even a tiny number of the 10% of young people who are LGBTQI, I’m happy.”

Not only does her presence lend support to pupils questioning their sexuality and those questioning gender roles — schools like hers that support LGBTQI staff are “richer for the diversity”, she says.

But schools like these are in the minority. A report published in April this year titled Under Pressure: The Regulation of Sexualities in South African Secondary Schools showed that gay teachers and parents are seen as a “threat” or a “contagion” by many pupils, parents, teachers and school management teams.

“… The participants construct an image of the homosexual Other — that is, certain discourses are used to position homosexuality as unnatural, immoral, ungodly and un-African — and in doing so transform the homosexual person into a threat or contagion,” wrote author Deevia Bhana.

“It is apparent that such meanings are used to justify discriminatory policies and practices within schooling contexts and to counter lesbian and gay learners’ claims to equality, freedom and dignity.”

Teachers’ experiences of these discriminatory policies and practices differ radically from school to school and every school has a unique combination of factors at play, says Wright.

“The attitude of the leadership at the school is probably the most influential factor; at some schools parents wield enormous power, and principals don’t do enough to make it clear that they support LGBTQI teachers in a potential situation of conflict.”

In those situations, teachers are afraid to be open about their sexual orientation for fear of parents’ complaints from those “who cling to this idea that teachers have some profound effect on their child’s sexuality”.

In some schools religion also plays a role in silencing LGBTQI teachers. “They may be forbidden from mentioning their partner, for example, and their lives become invisible in that rigidly heteronormative environment.”

But Wright is going to make the most of the opportunity she has to be open about her life choices.

“It works for me to bring my whole self to the classroom. I think it makes me a better teacher and I hope in some ways to be a role model for LGBTQI children who worry about what their future holds.”