Where are all the black women runners? 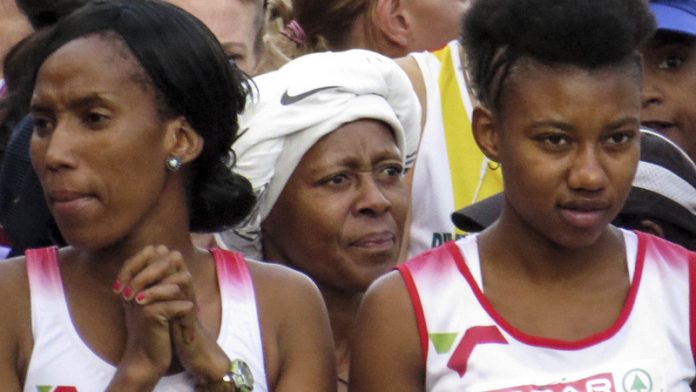 South African women’s athletics is not only desperately thin at the top, but alarmingly lacking in black female runners of world-class standard.

Over the years, names like Josia Thugwane, Hendrick Ramaala, Willie Mtolo, Mbulaemi Mulaudzi, Siyabonga Nkonde and Gert Thys have raced on the global stage, smashing world-class times in major events like the New York, London, Berlin and Olympic marathons. Around the world lead packs at top races are dominated by elite black men and women runners. Even locally it’s unusual to see a white face amongst the top eight men in the Two Oceans Ultra or the Comrades.

The same cannot be said for women. In South Africa the representation of black women racing world-class times is glaringly absent. The fact is simple: there are no black South African female runners performing to world-class standard. The question is why.

The issue is not unique to athletics. At the 2014 Commonwealth Games, not only was South Africa the worst performing nation in the top 40 at the medals tables; we also had the greatest gender inequality in medals of any country competing in the games.

“South Africa has a gender issue across all sports and all races. Our lack of elite black women runners is a glaring example of that, because running is the one sport where you would think we’d have discovered talent by now,” says Dr Ross Tucker, professor of exercise physiology at the school of medicine of the University of the Free State.

Over the years South Africa has produced a few world-class women runners, in Zola Budd, Elana Meyer, Colleen de Reuck and Sonja Laxton. But, as Tucker says, it’s like walking through a field and picking up a few gold nuggets, but when you start digging, there’s nothing in the soil. Why is this? Are we digging in the wrong places, or are we not digging effectively?

It starts with economics, says Tucker — running simply does not offer viable financial prospects, particularly for women. To make money out of running, you have to win, and there can only be one winner. Sport has a very limited life span, the return on that performance is low, and the likelihood of making money is slim.

“Achieving in sport requires careful planning at a national level. It is now September 2015. If we want a 25- to 27-year-old female athlete to win gold for South Africa at the 2028 Olympics, we need to be scouting amongst 12- to 14-year-old girls today. Where do we find the athlete with that ability, and how do we shape her talent to perform at world-class level for 2028?

“That’s the first failure of our system: we’re not finding these girls. Even if we do find such an athlete, there are crucial development steps over the next four to five years that have to be taken to groom that potential. We need the right type of coaching, at the right place and the right time, for that athlete to develop. We’re failing on all these counts,” says Tucker.

But the problem is more complicated than economics; it is deeply embedded in sociocultural gender issues and not easy to overcome. Traditional black African culture is heavily patriarchal, women are expected to focus on family responsibilities — girls are not encouraged to participate in competitive sport, and there are societal and familial pressures on women to play a role in the community.

Dr Catherine Draper, senior researcher in the Division of Exercise Science and Sports Medicine at UCT, says that young girls face a myriad of social obstacles when they try focusing on sport, such as the risk of teenage pregnancy, exposure to various sexual diseases, limited resources in the home, and lack of parental support.

“A young girl with athletic talent has a far tougher journey to navigate than her male equivalent. The obstacles she needs to overcome to reach her potential are many and multifaceted.

“We are not necessarily going to see black athletes, particularly black female athletes, come through if we consider that a large percentage of our population live in low income circumstances, with limited facilities and equipment, and without the right coaching, support and mentoring. Until society changes, the base from which we’re identifying talent is extremely narrow,” says Draper.

However, South African athletics does have its shining example of exception — a woman who, in her twenties, defied racial, economic and cultural odds to achieve top performance and national and international recognition. Born in 1957, Blanche Moila held national titles for 10km, 16km and 21km during the 1980s, represented South Africa at the World Marathon Championships in 1993, and made history in 1984 when she became the first female black athlete to be awarded Springbok colours.

Still performing at the top of her age group, 58-year-old Moila remains an inspiration to black women athletes, and is active in a coaching and mentoring role in KwaZulu-Natal athletics.

“The emancipation of black women in South African athletics still has a long way to go. There remain many social factors and cultural traditions inhibiting women in athletics. On paper South Africa’s constitution offers equal opportunity, but socially and culturally our society is not yet women-friendly. This impacts on our athletes greatly. South Africa has the talent; the challenge is sustaining it.

“In my mentoring I strive to encourage active participation of more young black girls, to overcome gender prejudices and myths about women in sport. I dream about South African female athletes one day outrunning the Kenyans and Ethiopians,” says Moila.