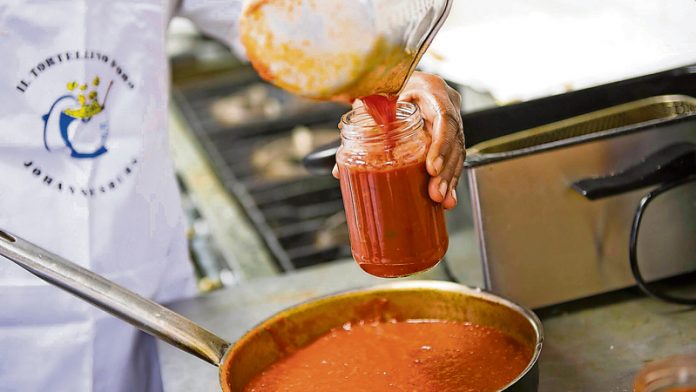 There probably are Italians who have no interest in good food, but I have yet to meet one. An Italian friend of mine gets her mother to smuggle in Parmigiano-Reggiano from home, along with dried porcini mushrooms, coffee, tuna in oil, olives, capers, anchovies and homemade passata.

She says that around the end of August, the end of summer, tomatoes are stacked on every available surface in her mother’s house. They buy about 100kg and make and bottle passata for the winter. The skins and seeds are removed and the pulp is “passed” – that’s where the word comes from – through a sieve.

Despite the all-year-round availability of ingredients from supermarkets, there’s still a strong tradition in Italy of preparing seasonal ingredients, which can be bought at neighbourhood markets.

Here, Woolies now brings in fresh San Marzano tomatoes. These are probably the best tomatoes to make sauce with; they are longer and pointier than the well-known Roma variety and have a thin skin and a higher percentage of pulp.

You can also buy canned San Marzano tomatoes, which at R20 a tin is well worth it. Many cooks I know always seem to be searching for cheap tins of whole peeled tomatoes, when in truth we should be looking for the most expensive.

At the Tortellino d’Oro Italian restaurant in the Oaklands centre in Johannesburg, Caterina Bollini and her team sell bottles of tomato sauce, or sugo di pomodoro, for R66. You can also buy this sauce with tuna or anchovies and capers (sugo alla puttanesca) or with pancetta (amatriciana).

The sauce is intensely flavoured, and very popular. The restaurant goes through between 300kg and 400kg of peeled canned tomatoes a month. Caterina says that not all canned tomatoes are equal and when they have on the odd occasion run out of their brand of choice – Divella – the difference between that and the substitute was immediately obvious.

Preparing the sauce
Caterina is the daughter of Dante and Valeria, who started the deli and later the restaurant 30 years ago in the same space.

I wondered wheter Catrina would share their recipe, and asked her what she remembered about the sauce from her childhood. She remembers her nonna Maria-Louise Rubbiani chopping a soffritto – onion, celery and carrot – with the curved blade of a mezzaluna, and then frying this in oil and then adding blanched, peeled and chopped San Marzano tomatoes.

This would cook for about an hour and a half, while Maria-Louise “did the ironing” or got on with the other business of running a household. They would all sit down for pasta at lunch. It’s Thursday morning at Tortellini, and the cooks are preparing another batch of tomato sauce.

In the hot and narrow kitchen there are six cooks wedged in tight, chopping and heating and pouring sauces. Cook Sinini Sibanda pours a good gulp of vegetable oil on to the rippled bottom of a well-used 30-litre pot and lets it heat. She adds a few cups of soffritto and stirs them for a few minutes in the hot oil; and then adds three huge tupperwares of crushed tomatoes. This is cooked for about an hour and a half, by which time it would have been reduced by a little less than a third. The sauce is then seasoned.

The sauce is used in the restaurant, and also bottled. Sinini pours the sauce into the jars, and then quickly raps the lid and then tightens it. The bottles are then stood on a tea towel in a clean pot and covered with water. This comes to the boil, the heat is turned off, and the bottles are left to stand overnight.

A turning point
Don’t even ask what happened when they forgot to put the water in and left for the night… A turning point for me and tomato sauce came after reading chef Michael Broughton’s Terroir cookbook. Never had I tasted a sauce so intense, almost silk-like in texture.

Tucked away at the back of the book is what he calls his “all-round tomato sauce”, which he uses both at home and in the restaurant on the Kleine Zalze wine estate near Stellenbosch. He says it may seem to use a lot of oil (60ml), but the quantity helps to emulsify the sauce as it cooks.

He also warns not to decrease the amount of salt or sugar because “the end result is well worth it”. This sauce is worth making once a week, and keeps in the fridge for a few days, or a few months in the freezer. It will add a sublime richness to your cookery.

A perfect meal
Heat a pan and add 45ml butter and 60ml olive oil and fry as much garlic as you dare (no more than a head) and a thinly sliced onion. Cook this for half an hour, or even as long as an hour, then add a small tin of tomato puree and cook for at least five minutes. Then throw in four big tins of tomatoes, crushing them as you go (or blitz them in the food processor), a little less than a tablespoon of sugar, and the same of salt, plus a few cups of water.

With the lid askew, cook this for at least two and a half hours, or as long as five, if you have the time. You may need to add a little water from time to time. Broughton says the sauce should now be thick, “almost like thick cream”, and recommends you gently simmer it for the full time – this helps to cook out the acidity. He also lets the sauce sit for 45 minutes afterwards with a handful of basil leaves and pepper.

I’ve used this in soups, lasagnes, sauces, in any recipe that calls for tomato sauce. As he suggests, toss the sauce with a bit of pasta and some grated Parmesan, and “you have a perfect meal”.

Tomatoes are the stars of the X-factor