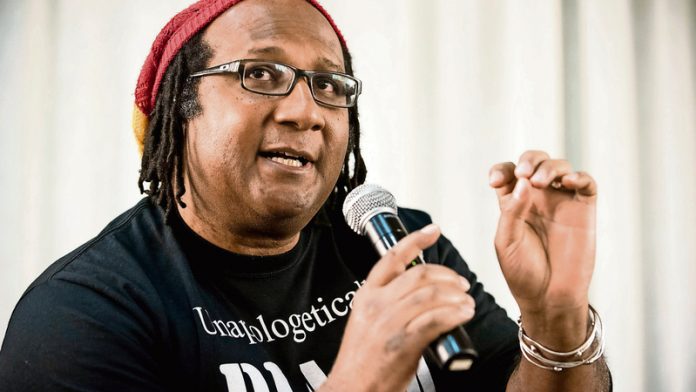 The animating spirit of Frantz Fanon was much in evidence at the recent M&G Literary Festival. Now, from one of the panellists at the festival, Lewis R Gordon, comes What Fanon Said: A Philosophical Introduction to his Life and Thought (Wits University Press), from which the following edited extract is taken.

There is a white construction called “the black”. This construction is told that if he or she really is human, then he or she could go beyond the boundaries of race. The black can supposedly “really choose” to live otherwise as a form of social being that is not black and is not any racial form or designation.

Each chapter represents options offered the black by modern Western thought. In good faith, then, the black hero attempts to live through each of these options simply as a human being. But the black soon discovers that to do so calls for living simply as a white. Antiblack racism presents whiteness as the “normal” mode of “humanness”. So, the black reasons, if blackness and whiteness are constructed, perhaps the black could then live the white construction, which would reinforce the theme of constructivity.

Each portrait is, however, a tale of how exercising this option leads to failure. And in fact, “failure” takes on a peculiar role in the work; it is the specialised sense in which Fanon is using the term “psychoanalysis”: “If there can be no discussion on a philosophical level – that is, the plane of the basic needs of human reality – I am willing to work on the psychoanalytical level – in other words, the level of ‘failures’ [ratés], in the sense in which one speaks of engine failures”.

The French word that matches the ordinary English use of the word “failure”, where defeat or setback is meant, is échec. Raté more properly refers to a misfire, missing the mark, or something backfiring, as in an old combustion engine, which explains Fanon’s reference to engine failures. The word is also used, however, to refer to not measuring up, of failing to meet a standard, as in the expression raté de père, a man failing to meet the expectations or standards of fatherhood, a concept rich with psychoanalytical content.

A paradox of failure
Fanon is thus referring to the frustration not only of missing the mark but also of the repercussions, which, inevitably, lead to therapy. That is why he says he is “willing to” work on the psychoanalytical level, for, as we will see, Fanon raises as well the question of whether the approach of failure is also a form of failure, which further raises the question of whether such a psychoanalytical approach is exemplified or transcended because of ultimately not measuring up or failing to meet its own standard.

There is thus a paradox of failure: to fail at it is to succeed; to miss the mark is to demonstrate the validity of rejecting it, and therefore affirming or achieving it. The motif of failure raises, still more, the question of the type of text Fanon has composed and how he is situated in relation to it. What we find is that each failure is not necessarily Fanon’s, for he is both the voice of the text (the black) and the voice about the text (the theorist and guide).

Thus, although Fanon the quasi-anonymous hero of the text, the black, constantly fails (misses his mark), Fanon the critic of Western discourses of Man, Fanon the revolutionary theorist who demands systemic and systematic change, succeeds (by identification of each failure).

Paradoxically, if the hero of the text wins (that is, achieves his aims), the hero of thought (the theorist) fails and vice versa. Thus, after announcing in the introduction that ontogenic and phylogenic explanations fail and need to be mediated by sociogenic explanations premised on human agency, Fanon charts the course of the black with these theoretical “idols” of humanisation. Like Friedrich Nietzsche, who sought to break the idols of (and, thus, idolatry in) Western civilisation, Fanon hopes to destroy the idols that militate against the human spirit in an antiblack racist and colonial world.

The transformative force of linguistic mastery is one such idol. Language is a construction that has the force of forming reality. Taking heed of Marx’s counsel in his 11th thesis on Feuerbach – “Philosophers have only interpreted the world in various ways; the point is to change it” – Fanon advances the godlike quality of this dictum through Paul Valéry’s observation that language is “the god gone astray in the flesh”.

The transformation of language
To transform language, then, is the godlike project of transforming reality. Living language is, however, embodied. Flesh and such language are, in other words, symbiotic. Fanon is here referring to the phenomenological view of body and flesh; they refer, as well, to consciousness, which, from an existential phenomenological perspective, is always embodied consciousness of things, including intersubjective consciousness or the social world. This is because consciousness requires a point of view, a perspective, which cannot be achieved, as Sartre and Merleau-Ponty showed, without a body.

Fanon recounts many instances of the black struggling to wear and thereby express nonblackness – the effort at ontological transformation by departure from coloured colonies to living for a time in Paris, the French metropole (because in Paris, there are “real” French people, those at the centre of the French world, so by becoming Parisian, one “really” becomes French), where the reality principle awaits; the struggle with the r-eating tongue, which Fanon describes as a “wretchedly lazy organ,” as in the case of the newly arrived Martinican who knows the stereotype – “Je suis Matiniquais, c’est la pemiè fois que je viens en Fance” (“I am Matinican; it is mi fust time in Fance”) – has practised rolling his rs to the point of yelling, “Garrrçon! Un vè de biè.” (“Waiterrr! Bing me a beeya!”).