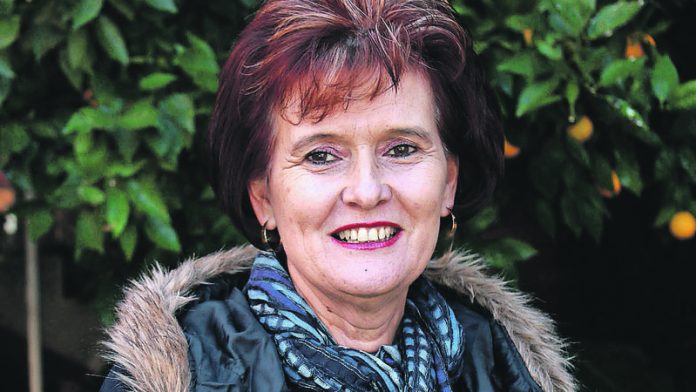 I have been teaching at Laerskool Unie in Klerksdorp for the past eight years, which serves a very poor community; most children live on the bare necessities. The school also caters for learners from the nearby Rethabile Children’s Home. Because of these circumstances I aim to teach my learners about the significance of giving. It’s not about money, but about things that will give meaning and purpose to their lives.

We do a lot of community outreach programmes and this gives learners the opportunity to internalise these values. For instance, we visited a local clinic for depression, where we massaged patients’ feet. At first some of them viewed this as an intrusion into their personal space.

During the visit one of our learners, who had just lost her dad, spontaneously started talking about her emotions. Learners broke into gospel songs and the patients joined in. At the end of the session all of the patients, teachers and learners were in tears. One of the patients was so moved she confessed that she had tried to commit suicide the previous week, and she gave a bouquet of flowers to the learners as a sign of gratitude.

We also knit blankets for Aids and cancer patients. We have been doing this for two consecutive years; every child has to knit a block and bring it to school.

The wool was donated to the school and I give it to them on a Friday so they can complete it by Monday. One Monday morning a boy asked me to finish his incomplete block for him. He said they didn’t have knitting needles at home and instead used two pieces of barbed wire to knit! I sewed it together to make knee blankets, and then we went to the townships with the hospice staff to hand it out to the patients. The learners were so touched to see these terminally ill people and the circumstances in which they live.

We also hold soup kitchen sessions for the poor and homeless, handing out soup and bread. When we arrived at the spot one icy winter morning, a boy living on the streets was lying shivering under a piece of cardboard. We gave him some warm clothes, soup and bread. An old man on crutches also hobbled towards us.

A few girl learners ran to help him to our table. Although they complained afterwards that he stank, during that precious moment they looked at him through God’s eyes and just saw someone who needed help.

In 2013 a grade two learner at our school was diagnosed with aplastic anaemia, a condition associated with cancer. His mom lost her job due to his illness, because they had to travel to Johannesburg every second week for treatment. We started a trust fund through the school to support them financially.

When he eventually started his treatment, we bought him Superman pyjamas and a bag for his hospital visits. I arranged a “bandana day” where he was our superhero, and a “pink ribbon” day where the whole school wore pink and formed a ribbon with pink balloons on the rugby field. A team from our school did the Relay for Life (cancer awareness walk) where we walked right through the night. Luckily this coincided with his birthday and we had a special party for him on the same night.

Unfortunately he passed away on December 1 2014. We mourn the loss of our brave little soldier, but throughout his illness he knew that his whole school was supporting him and treating him as the hero he was to us!

A boy in terrible circumstances, whom I took under my wing for several years, once asked me if one can adopt a mother, because he wanted to adopt me! I was invited to his matric farewell last year as his guardian and I feel so privileged to know that he honours me as his “mother”.

For me, teaching goes far beyond the walls of the classroom. I would like my learners to take with them in life the feeling of being accepted and appreciated just as who they are, and experiencing the satisfaction of giving of themselves.

Maryke Gird was a runner-up in the “Excellence in Grade R Teaching” category of the National Teaching Awards 2014.

'Being registered as an AGA(SA) means you are capable of engineering an idea and turning it into money,' says Raymond Mayekisa
Read more
Advertising
Continue to the category
Coronavirus