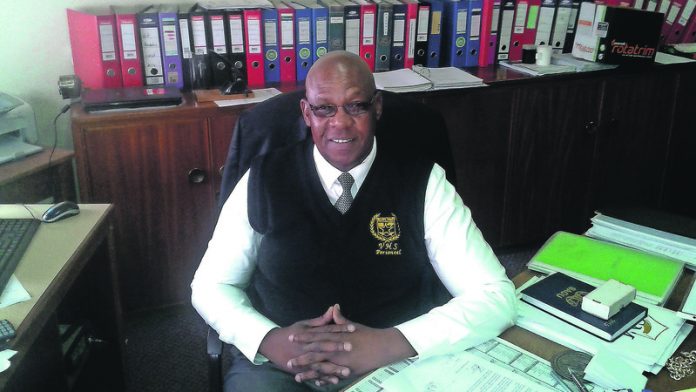 I arrived at Vryburg High School (VHS) in 1999 as deputy principal on secondment transfer. I have been deputy principal at this school for nearly 15 years and have now been principal for almost two years. I found a well-functioning school with dedicated teachers who produced very good academic results. However, only one section of the school fully enjoyed the benefits of this as black learners were deliberately excluded.

Children have a strong sense of justice. They rebel at the slightest suspicion of unfair treatment. My task at the school was therefore clearly cut out for me: to facilitate, together with the school management team (SMT), the integration process. That was not easy, because of the resistance I encountered from the school governing body (SGB) and some sections of the staff. Nevertheless I was up to the challenge.

All children are born intrinsically good, irrespective of their parents’ race, financial stature or religion, and with the potential to achieve great things in life. The environment in which they develop determines whether the child will remain being a good person and realise their potential; it is the primary duty of educators to unlock this potential. I had to restore the dignity of the black learners and inculcate a sense of belonging in them. This had to be done without making the other component of the student body feel something was being taken away from them.

As an educator my strength lies in being able to work with children and forging a relationship of respect and trust. I therefore decided to concentrate my efforts on uniting the learners of VHS.  I learned to love all my learners by talking openly to them, in groups or as individuals. I make a concerted effort to know their names, to show personal interest in their wellbeing and speak to them in their home languages without patronising them. A simple gesture such as greeting a learner by name goes a long way towards establishing trust.

I use the Monday morning assembly to speak about subjects that were previously avoided: racial and cultural tolerance. I talk constantly about the learners’ duty to be committed to the school’s ethos and traditions, without alienating cultural or religious beliefs. Although our school is founded upon strong Christian principles, we do have learners affiliated to other religions and they must also be made to feel welcome. I speak to our learners about racial slurs and their demeaning effect. I also acknowledge good sport, cultural and academic performances in both learners and teachers. I constantly remind the learners about the significance of the school song and the dignity with which the national anthem must be sung. In the past one could easily detect that when the national anthem was sung, some verses were sung with vigour by one racial group and the other parts enthusiastically by the other group.

Preparing for world of adulthood

The family environment shapes the character of a child, but I believe it is the school environment that must refine this character, by enhancing positive tendencies. This is even more crucial at high school level, for immediately after this phase the learners enter a different world as young adults. The school must equip them adequately for this eventuality: emotionally, morally and intellectually. I keep this at the back of my mind even as I discipline a learner who has transgressed the school rules.

I often have parents — some of whom I haven’t met before — walk up to me and tell me how their children admire and respect me. I feel deep gratification, for this means that through my relationship with the children, I am gaining the confidence of parents. Parents just want a good education for their children, which is why they pay school fees even in these difficult times. I therefore remain acutely aware that as the principal I must give them value for their money.  Similarly, I cannot be in a position to demand quality from my teachers if my own work is mediocre.

Our teachers are highly professional and committed. I constantly motivate them to use their expertise to benefit all learners. I have therefore adopted an inclusive approach to decision-making. The SMT meets fifteen minutes before the school starts and the staff meets during breaks. In the past the principal used these gatherings mainly to make announcements. Now the discussions are robust and everybody is able to openly voice their opinion. The gatherings are very productive as compared to long, boring, formal meetings held in the afternoon.

Genuine teachers do not seek financial reward for their efforts: they attach great value to being acknowledged for their work. I use these meetings to thank my teachers for their unwavering commitment to serve the school.

As a result they work hard during classes and in the afternoons and all of them are engaged in sport, culture or extra classes. Our academic results are consistently outstanding. In 2014 we had a 100% matric pass rate, with four learners in the top 20 of the province and one learner obtaining position three at national level. This had never happened before.