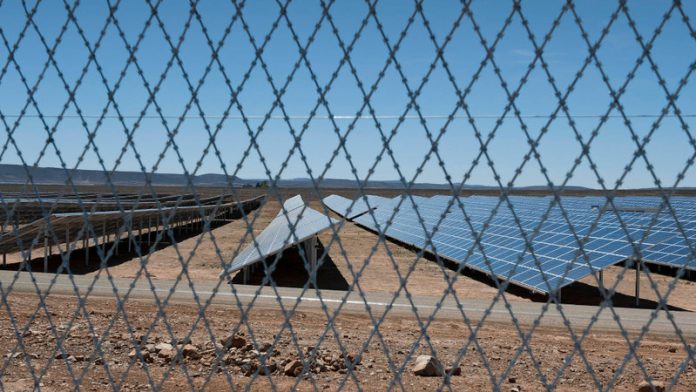 Near a massive iron ore mine in the Northern Cape, almost 320 000 photovoltaic panels mounted to track the sun cover the rust-coloured earth. Spanish developer Acciona SA built the 94 megawatt (MW) Sishen solar project in about 16 months under some of the strongest sunshine in the country.

Solar and renewable power is gaining fast in South Africa, the fifth-biggest producer of coal, which is burned to generate most of the country’s electricity. The alternatives have attracted R193-billion in investment since 2011, helping the government ease blackouts. Two coal-burning power plants first approved in 2007, now costing around R230-billion, are over budget and more than seven years behind schedule.

South Africa’s experience shows how renewables are spreading across the developing world, opening new markets with a reputation for convenience and plunging costs. That’s challenging the traditional selling point for the most widely used fossil fuel, which prides itself on being the easiest way to boost power supplies.

“In the past we all looked at green and everybody was thinking, ‘Well that’s great, but it’s very expensive, and it’s for the rich,'” said Karen Breytenbach, head of the Independent Power Producer (IPP) office, a group established by the government to procure energy from private sources. “We have moved the market from very expensive green power to affordable power.”

Lone bright spot
Renewables are a lone bright spot in South Africa’s power industry. State-owned Eskom has struggled to meet demand, cutting power supplies on 99 days this year to protect the grid while the shortages stunt the economy. Eskom’s older power stations are susceptible to breakdowns from lack of maintenance.

Trouble with bringing the coal plants online is emblematic of the industry’s difficulties worldwide. Coal prices have tumbled by 50% since the start of 2011, tipping more than three dozen mining companies, including Patriot Coal and Alpha Natural Resources, into bankruptcy. Envoys from more than 190 nations, including South Africa, will  try to reach a historic deal in Paris in December limiting fossil fuel emissions everywhere, suggesting more regulations against coal.

Renewable installations, meanwhile, are surging in South Africa and elsewhere in the developing world. Minister of Energy Tina Joemat-Pettersson in April accelerated the programme, which follows the country’s National Development Plan. Auctions first started in 2011 under a framework the government designed with developers and banks.

Renewable energy auctions
Starting with almost zero utility-scale photovoltaics in 2010, South Africa has now procured solar capacity of more than 1 000MW, a little more than what a nuclear reactor produces. Instead of offering fixed incentives in the form of feed-in tariffs as Germany did, South Africa designed a competitive tender process for developers to bid on the renewable energy projects.

The government will procure more than 6 000mw of wind, solar and hydro plants in South Africa as part of the biggest surge in power capacity since the 1980s. The nation saved R4-billion in fuel costs and avoided some blackouts in the first half of 2015, according to a study by the Council for Scientific and Industrial Research (CSIR), a Pretoria-based research group that found renewables may be the cheapest way for the nation to prevent shortages.

‘Cost competitive’
“Changing from a feed-in tariff to an auction has been a blessing and turned what many thought would be an expensive exercise into one where solar and wind are extremely cost competitive in global standards,” said Derek Campbell, an analyst at Bloomberg New Energy Finance.

India and Brazil are using auctions like South Africa’s to boost renewable capacity. By 2040, $12.2-trillion will be invested in power generation worldwide – 78% of that in emerging market nations – and two-thirds of the total will be in renewables, according to Bloomberg New Energy Finance.

For South Africa, the interest in the renewables programme “was far beyond our wildest dreams”, said Breytenbach. It pushed the cost of solar and wind power lower, allowing the government to reduce the price paid for power, through successive auctions.

The programme has been praised for its clarity and transparency and “could be a useful model for private funding of other types of infrastructure projects”, said consultancy McKinsey & Company in a report on Tuesday. “Backing [particularly long-term debt] from South Africa’s deep financial market has been strong,” it said.

Coal remains South Africa’s dominant power source, accounting for 88% of electricity supplied in the first half of the year, according to the CSIR. Solar and wind together were 1.8%.

Coal setbacks
Bringing new coal plants online hasn’t been as easy as the government anticipated. Labour disputes and construction delays hit the 4 764MW Medupi power plant in Lephalale and the 4 800MW Kusile power plant in Emalahleni. Neither will be fully operational until at least 2019.

Even more baseload generation is needed for future demand and the IPP office plans to procure 2 500MW of coal stations by 2021.

On a rare overcast day, a computer in the control room at the Sishen solar plant shows 14MW flowing from the panels supplied by JinkoSolar. Other than a squeak as the GPS adjusts their position for maximum radiation, the rows of panels are silent.

Through the competitiveness of its bidding rounds, South Africa has reduced tariffs for solar power to as little as R786 a MW-hour (MWh) from R3 288, according to data compiled by Bloomberg.

The average cost of energy from independent power producers using renewables is R2 172 a MWh, which is cheaper than the R2 573 from turbines using diesel, the state-owned power company reported this year. Baseload power – primarily coal – is still the cheapest at about R300.

In spite of the tariff reductions, the procurement programme is “well planned” and predictable, Acciona energy unit chief executive Rafael Mateo said at a visit to his company’s project. He expects to bid again in successive renewable energy auctions.

“It is a good example of how to drive renewables as part of the solution to South Africa’s current energy crisis,” said Mateo. – Bloomberg