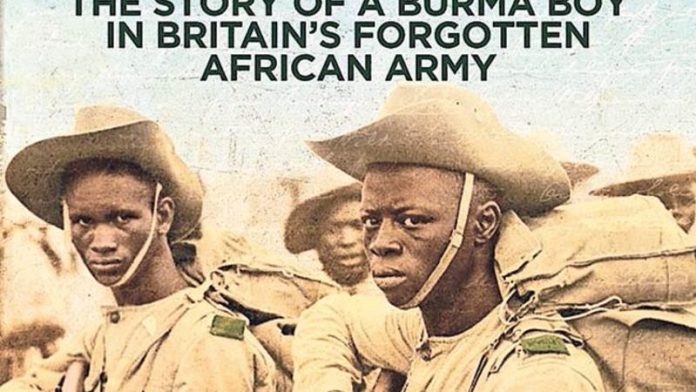 A few months before he was shot as an enemy soldier in its sweltering jungles, 16-year-old Nigerian Isaac Fadoyebo had never even heard of Burma. The journey that led him there began in a fit of youthful exuberance when he ran away from his village in southwestern Nigeria and signed up to fight for Britain in World War II.

He joined an estimated 100 000 others from Britain’s colonies of Gambia, Ghana and Sierra Leone who sailed from West Africa’s creek-lined coast around the Cape of Good Hope and onwards to Burma. There, Japanese soldiers ambushed his platoon and Fadoyebo was left for dead behind enemy lines.

What happened next captures not just the personal bravery of one man and the strangers into whose midst he was catapulted, but shines a light on a forgotten front of the war.

The ripple effects of the Southeast Asian conflict radiated from Burma’s Rohingya Muslim minority, whose persecution today is a direct war legacy, to the returning West African soldiers who later started the region’s march towards independence.

Alongside Nigeria’s own inability to remember its war dead, this story is also one of Britain’s often-neglected debt to its colonial soldiers, and how two British men helped to resuscitate that legacy.

Even in Britain, the 81st and 82nd divisions – the Allies’ West African force – were known as the “forgotten army” as all eyes became fixed on the threat of Nazism closer to home. The eight in 10 West Africans in those divisions in Burma were a forgotten contingent in the forgotten army.

Now Fadoyebo was to become one of its dead. It was monsoon season in Burma, a time of mosquito-filled heat and lashing rains. Too weak to move, he lay bleeding in the tropical forest 9 600km from home and waited for the end.

Nigeria in the war
Seventy years later, there’s still disbelief about this remarkable chapter in Nigeria’s history. “But for my grandfather being involved, I never would have been able to put into perspective the fact that Nigeria was in the war,” said Fadoyebo’s grandson, Ayo, a human resources worker in Lagos. “I knew Nigerians fought, but it was so distant I couldn’t place how it affected me as a Nigerian.”

It was a feeling common even at the time. In countless villages such as the sleepy hilltop one of Owo, where Fadoyebo lived, the bloodshed had been a distant thing rumbling on in remote lands. There were vague rumours Hitler wanted to invade Nigeria itself, to plunder its mineral wealth. But the tentacles of the far-flung battles reached Owo when a recruitment truck rolled into the bushes in December 1941. Among the curious onlookers was Fadoyebo, a tall, well-built teenager. The colonial officer’s exhortations to fight for the empire didn’t rouse him; he sensed a chance to escape the sleepy backwater, earn money and see the world.

Fadoyebo’s tale from there might have been lost to history were it not for British journalist Barnaby Phillips, who chronicled the astonishing story in his lucid, detailed book Another Man’s War.

In 2011, Phillips took time off from working in Athens to research the “Burma Boys” in London’s Imperial War Museum. The addition of East African recruits swelled Britain’s colonial army to a 500 000-strong force. But Phillips noticed something rare when he began reading the available literature.

Among the hundreds of books, he chanced upon a slim book by one Isaac Fadoyebo. “It was called A Stroke of Unbelievable Luck and was a beautiful, 70-page manuscript by a Nigerian who not only survived an extraordinary experience, but put it all down in writing,” Phillips said, still amazed at his own good fortune.

That was down to David Killingray, an English professor specialising in imperial history. He received the handwritten manuscript – Fadoyebo’s only one – in 1989. “I immediately realised this was extraordinary, and set about getting it published,” he said. Several hundred copies languished in academic and military libraries for years.

Fadoyebo’s story
Fadoyebo’s story began on March   2 1944, when his platoon was eating breakfast on a steep bank of Burma’s Kaladan River. Suddenly they came under ferocious attack from the Japanese, who were expertly trained in jungle warfare. Men fell around Fadoyebo and a bullet pierced his thigh. He dropped down in anguish.

“He knew what was coming. The Japanese, take a prisoner? A white man, like Captain Brown, perhaps, but a black man? No chance,” Phillips’s opening transports readers viscerally to the scene.

The final shots never came; perhaps the Japanese believed he would succumb to his wounds. Another soldier, David Kagbo, was also wounded. Fadoyebo crawled to him and they waited together for death.

Villagers brought them food. Fadoyebo’s stroke of unbelievable luck was going down in a village of Bengali Muslims, known as Rohingya, who sided with the British. For weeks, they brought sustenance, sometimes every other day, sometimes at longer intervals.

Eventually, a farmer named Shuyiman helped the two men limp to his home. There, at risk of death, he sheltered the two strangers until British forces broke through again in December. Their rescuers knew them only by Muslim names they adopted in deference to the villagers: Fadoyebo was Suleman and Kagbo was Dauda. Fadoyebo never forgot his saviours. “God sent them to save me,” he would always say later.

“He had an unquantifiable desire to know what had happened to Shuyiman’s family. He talked about them all the time,” Ayo said.

A call from a stranger six decades later proved to be another stroke of good fortune. After chancing on his memoirs, Phillips had spent weeks in an effort to track down Fadoyebo. “I was so worried. I thought he wouldn’t be able to understand me, he’d be deaf, he wouldn’t be able to catch my English over the phone,” he said, explaining the moment he finally found a working phone number for Fadoyebo.

“I gave this long speech about who I was, what I wanted to do and so on.” There was a long pause on the other end. Then a deep voice replied: “Mr Phillips, when are you comingto Nigeria?”

That began a friendship between the two until, moved by his friend’s pleas, Phillips journeyed to Burma in hope of finding Shuyiman’s family and passing on the thanks the veteran had longed to give for decades.

History fading
It’s difficult not to worry about how quickly history can fade in Nigeria. Official Western accounts long played down the contribution of Africans in the Asian campaign – allied commander General Slim never thanked the 14th Army, of which they were part – and few young Nigerians know of it.

“As children we didn’t go to the village very often; if we had, we would have known about it,” said Ayo, who said his grandfather never talked about his wartime experiences until the call from Phillips. During an extended visit to the village in 2002, a cousin introduced Ayo to everyone by declaring: “This is the grandson of Baba Solja.”

“As soon as he said that, no further explanation was needed. It was established who I was,” Ayo said.

Nigeria’s military still has 81st and 82nd divisions in honour of the veterans; VJ Day celebrations are invariably muted. “We celebrate Second World War veterans at every opportunity. Just like any other Nigerian soldier who dies serving, their children have been awarded scholarships and other welfare packages,” said spokesperson Rabe Abubakar.

Next to the neatly manicured World War II graves in a cemetery partly maintained by the Commonwealth War Graves Commission in downtown Lagos are the litter-strewn, unkempt grounds that house the government-run memorials for Nigerian peacekeepers in the 1990s.

At least one man’s memories were properly looked after. In a documentary he made later, Phillips travels across wide expanses of jewel-green fields dotted with crumbling temples in Burma’s Rakhine state.

It’s a risky journey, given the turmoil affecting Rohingya Muslims there, and there’s every chance that the village where Fadoyebo was rescued has been razed. Phillips eventually finds the right location – the story of the two African men is part of local folklore.

Watched by chattering monkeys, Shuyiman’s family struggle to hold back tears as he delivers Fadoyebo’s letter. “His real name is Isaac Fadoyebo and he wants you to know he thinks of your mother and father and sister every day,” Phillips begins, himself tearful.

Photographs of Fadoyebo are passed round. The women clutch them to their chests. One man blinks furiously. Another woman covers her hand with her face and sobs. “We’ve thought of him for so long,” she says, wiping her eyes with her headscarf.

Being able to thank those who sheltered him meant Fadoyebo was at peace even when old age sent him to hospital in 2013. Incapacitated in bed, he discussed attending his grandson’s wedding when he got better, and picking up a wartime medal that the government had promised. “I’m fine, don’t worry. I’ll pick up the medal when I’m out of the hospital,” he told Ayo just before he died on September 9.

“They say people disappear, young men with dreadlocked hair, with tattoos, or even just carrying a laptop in a backpack,” writes Elnathan John in a reflective essay about Nigeria.
Read more
Friday

Book review: The girl with the louding voice by Abi Daré