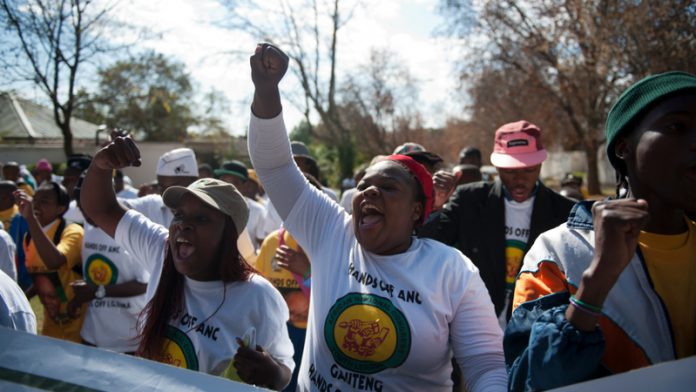 A caricature of the biblical figures David and Goliath has been edited to represent the leadership battle in the ANC Youth League.

In the picture doing the rounds on social media, Goliath stands tall, shoulders back and ready to pounce as demure David lobs a stone at him. Everyone knows how that ends, but there’s no certainty this will be the case after the weekend’s elective congress.

Here, Goliath is the so-called premier league in the ANC, a group of provincial premiers accused of pushing for their candidate, North West MEC for local government Collen Maine, to lead the youth league.

Depending on who posts the meme, David is labelled as the other five presidential hopefuls wanting to lead the league.

Mlungisi “Lulu” Johnson, who took over as president of the youth league from Peter Mokaba in 1994, said the tensions and divisions are fuelled by ambitious leaders.

In an interview with the Mail & Guardian, Johnson – who is an ANC MP – said the league’s congress is linked to “power at all costs”.

“There are people who are pushing the agenda for 2017 [when the ANC is scheduled to elect new leaders], but it is happening at the risk of young people being unable to pursue [their] very own agendas,” Johnson said.

The influence of money is unprecedented: “The race is linked directly to money,” he said.

But Nathi Mthethwa, an ANC national executive committee (NEC) member deployed to help the league prepare for its congress, holds a different view. He told league delegates complaining about the “premier league” to stop whining. Mthethwa believes it’s normal for ANC leaders to have an opinion on who should lead the league and it’s best to not beat around the bush.

He said it’s natural for leaders to have preferred candidates, but that it’s up to young people to decide who should lead them.

On Thursday, less than 24 hours before the conference was scheduled to start, it was still unclear who Maine would be up against as processes were entangled in red tape and political manipulation.

He, however, has the support of three powerful ANC provincial chairpersons and premiers: the Free State’s Ace Magashule, North West’s Supra Mahumapelo and Mpumalanga’s David Mabuza.

The “premier league” became a prominent feature in the ANC Women’s League congress when former league president Angie Motshekga lashed out at the three provincial chairs for imposing a presidential candidate on the league. This trio successfully backed Bathabile Dlamini for women’s league president.

By Thursday afternoon, Maine had received formal endorsements from six provinces. The ANC Youth League in the Western Cape threw its weight behind presidential hopeful Pule Mabe, a controversial MP and member of the ANC NEC.

A day before the conference was to start, lobbying was at its zenith for what is essentially the position of presidential “kingmaker”. The six candidates are keen to lead the youth formation that campaigned successfully for the removal of former president Thabo Mbeki and for President Jacob Zuma’s election.

Almost three years after the previous leadership was disbanded and an effort was made to “change the culture of the youth league”, there are echoes of 2008, when Julius Malema was first elected to lead the league.

In the build-up to this weekend’s congress, provincial meetings were marred by violence, court challenges have popped up repeatedly to dispute elected leaders and allegations have been made that processes have been manipulated to favour certain people.

Perhaps the real Goliath in the youth league’s quest to return to its former glory is national political ambitions from all sides and factions.

Whichever way the congress goes, one cannot deny the intrinsic link between the youth league’s 2015 and the ANC’s 2017 congresses: it is about nothing else but political power.