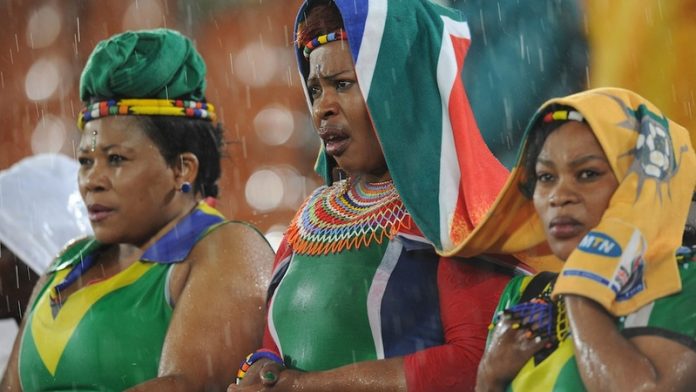 A large Sunday Times headline in capital letters, EMBARRASSING, summed up the mood of South Africans after a shock Africa Cup of Nations defeat in Mauritania this weekend.

Declared by Bafana Bafana (The Boys) coach Ephraim ‘Shakes’ Mashaba as a “must win” 2017 qualifier, it ended in a humiliating 3-1 defeat against rivals 42 places lower in the world rankings.

“A damn disaster” said the City Press headline and The Sunday Independent wrote “Bungling Bafana bite the dust in Mauritania”.

Some social media users suggested the team be disbanded and replaced by the national-23 squad while others believe CAF Confederation Cup semi-finalists Orlando Pirates should represent the country.

The Sunday Times wondered if former Pirates star Mashaba was aware that the match in Nouakchott would be played on artificial turf.

And if he was aware, why were none of the practice sessions in Johannesburg this week conducted on such a surface?

Mashaba, who replaced unsuccessful Gordon Igesund last year and initially produced some impressive away victories, was also evasive about how much homework was done on Mauritania.

“We have checked their international records,” was all he would say.

While the tactics of Mashaba in north-west Africa are sure to be scrutinised, the real issue is mental with South Africa never matching the fighting spirit of Mauritania.

A home team using a no-frills, physical approach were clearly desperate to win before an excited, vocal near-capacity crowd at the 10 000-capacity Stade Olympique.

Many South Africans looked like they were in Nouakchott under duress and could not wait to board the 10-hour flight south to Johannesburg.

Khune allowed a long-range free-kick to slip from his grasp into the net after five minutes while Furman had a ‘fresh air’ shot and earned a needless yellow card before being substituted.

After hosting and winning the 1996 Cup of Nations, South Africa have been steadily slipping down the rankings to lie 17 in Africa and 72 in the world this month.

Mauritania, once bottom of the African rankings and now 33 in Africa and 114 in the world, were not the only minnows to triumph.

Wol Tong scored the match-winner seven minutes after half-time in the capital of the youngest African nation, which achieved independence from Sudan four years ago.

France-based Fode Dore scored all four goals as Congo Brazzaville bounced back from a disappointing draw with Kenya three months ago by winning 4-2 in Guinea-Bissau.

Morocco won 3-0 in Sao Tome e Principe, there were 1-0 home victories for Liberia over Tunisia and Botswana over Burkina Faso, and Seychelles and Ethiopia drew 1-1 in other qualifiers. – AFP

Hugo Broos can bury his head in the sand no longer