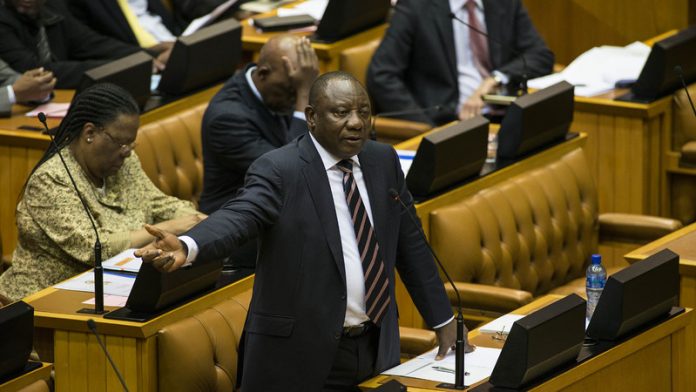 The ANC is serious about fighting corruption and there is political will in government to deal with the findings of institutions such as the public protector’s office.

This is according to Deputy President Cyril Ramaphosa, who was answering questions in the National Assembly on Wednesday.

Talking about dealing with gross corruption in the public service, the deputy president said a number of policies have been put in place to fight corruption in government.

With opposition MPs snickering in disbelief on one side and support from the ANC benches, Ramaphosa said the ruling party was not merely paying lip service to the issue of dealing with corruption.

“It is actually getting down to business. A number of civil servants have been dealt with in a disciplinary action, some have had criminal charges brought up against them … had to refund money to the state. All these are both policy instruments as well as practical action that has been taken.”

He said one of their measures was stopping civil servants from doing business with the state.

“In a number of investigations, it has been found that a number of civil servants were actually doing business with the state, in schools, for example, you would find that a school principal is the head of a catering company. It is for this that the state decided we should stop and curb activities like that because the conflict of interest is quite huge in those instances.

“That was a policy move to curb activities such as this. One of the most outstanding decisions was to establish the office of the central procurement and this was decided by the ruling party and it has now been put in place. The Bill is going to be put before Parliament. The machinery is being put in place to deal with the question of corruption.”

Asked by Inkatha Freedom Party MP Mkhuleko Hlengwa if government had the political will to take public protector Thuli Madonsela and her findings seriously, Ramaphosa said there was.

“There is political will to deal with the findings of the various institutions that we have put in place that are meant to deal with corruption, example the public protector. She recently came out with a report on Prasa and when she came out with that report, the board said they are studying it and will look closely at it and see what action needs to be taken.

“The government’s commitment to dealing with corruption is strong. And it is for this reason that this office of central procurement has been put in place, as corruption always happens around procurement.”

He told MPs that the NDP was not going anywhere. This after Economic Freedom Fighters chief whip Floyd Shivambu questioned the government’s insistence on going ahead with the plan, which they felt would not achieve any of its set out goals.

He said the plan was now in implementation mode and because it was an overarching plan, it touched on every aspect of South African life.

“This has become the most wholesome plan our country has had and it is deeply embedded on the Freedom Charter. We have no plan whatsoever to abandon the National Development Plan or the Freedom Charter. This is our plan, it is a plan of the people of South Africa. They own it and they are watching us as we implement it.”

Ramaphosa said the country was not alone in facing financial woes and said the magic was in harnessing the private and public sectors’ strengths to make sure the economy grows. “We are going to turn this economy around.”

DA finance spokesperson David Maynier, in a supplementary question, said that deputy public works minister Jeremy Cronin patently disagreed with this view because he had downplayed the plan, which has faced strong opposition from left-wing members of the ruling alliance as a mere vision and that government “cannot and indeed will not implement the National Development Plan”.

Maynier cited an editorial in City Press in July in which Cronin wrote: “[Former minister Trevor] Manuel is now ill-advisedly seeking to cast the NDP in stone. But the NDP is not a ready-made implementation plan, it is more a vision. It consists of some useful insights and recommendations, intriguing but untested proposals, summaries of programmes long under way, and much else. These are sandwiched between an opening section of cringeworthy poetry [‘Our leaders’ wisdom is ours, because we sense our wisdom in theirs …”] and a clumsy attempt to present a social contract theory.”

In a blustering response, Ramaphosa said Cronin was, on the contrary, working alongside him to implement the plan that government adopted as its long-term policy blueprint three years ago.

“I work with deputy minister Cronin and the both of us are leading the charge in implementing the programmes that are set out in the National Development Plan … you want us to disown our minister. No, we will not, we will rather disown you.

“Oh, the poetry in the National Development Plan is so well crafted. The deputy minister is a poet himself and you should take time yourself and read his poems. It will open the pores of your thinking … what you have said and what the deputy minister has said is not mutually exclusive.” – Additional reporting by ANA