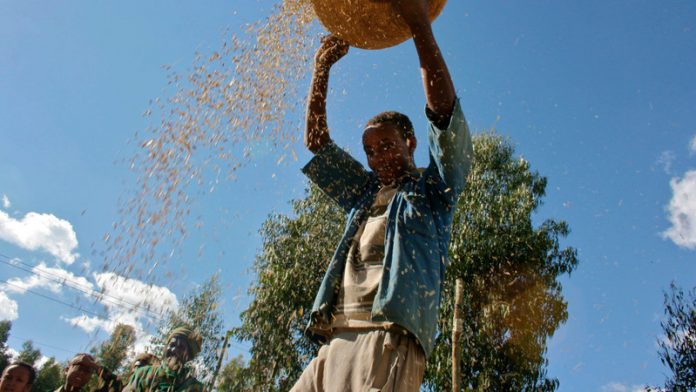 The African agriculture sector hasn’t been without its challenges in recent years. In South Africa alone, farming has been plagued by issues such as land reform, trade challenges and minimum wage disputes. But agriculture is still emerging as a sought-after asset class for institutional investors.

During this year’s Grow Africa Investment Forum, private-sector investors in African agriculture reported significant improvement in the enabling environment, which comprises a mix of government policy, access to finance and ease of transportation and telecommunications infrastructure.

The investment momentum in agriculture is being driven by several compelling factors, the most pressing of these being Africa’s food security. The world’s land and water resources are finite and under pressure from a swelling population. Africa, in particular, has the highest fertility rates of any region with 4.7 children per woman.

The United Nations Children’s Fund report, Generation 2030/Africa, highlights that, in 1950 Africa accounted for only 9% of the world’s population, today 16 out of every 100 people are African and it is a well-worn statistic that by 2050 Africa will account for a quarter of the global population. Demographic trends are presenting a world that is an ever more African place.

Unfortunately, coupled with this is persistent undernourishment, and hunger continues to stalk Africa, more so than in any other region globally.

According to the UN, Africa is expected to be the most challenging region regarding food security as the continent’s population doubles in the next 35 years. It is against this backdrop that agriculture, which currently employs 65% of Africa’s workforce, is increasingly seen as the continent’s untapped gold mine.

According to the latest publication by the Food and Agriculture Organisation (FAO) of the UN, when compared with the production levels of 2006, a 70% increase in agriculture production is needed to feed the more than 9.7-billion people expected worldwide in 2050, 25% of this being in Africa. And, as demands on the global food supply soar, the greatest opportunity for agricultural profits is most likely in Africa.

Africa has 39-million hectares of land physically suitable for irrigation, but only 7% of this is irrigated (and just 3.7% in sub-Saharan Africa), according to the Africa Infrastructure Country Diagnostic. Therefore, despite having some of the richest natural resources for agricultural production in the world, Africa currently spends more than $25-billion annually for food import.

But there is an increased focus on agriculture-led growth on the continent, with African countries making up eight of the 10 countries that have the fastest-growing food sectors in the world.

This focus on agriculture as an economic driver is influenced by a number of socioeconomic factors, including population growth, poverty and unemployment. These factors present acute challenges and make unlocking African agricultural potential not just an attractive option, but a necessity. The UN Conference on Trade and Development has estimated agriculture’s annual investment gap for the 2015-2030 period at $260-billion in the developing world.

This presents a significant role for institutional investors looking for a good capital preservation tool that is also a reliable inflation hedge and has low to negative correlation with traditional asset classes.

In the current global environment, agriculture is progressively presented as an attractive asset class for a diversified portfolio. Given the recent economic turbulence globally, the low interest rate environment and a search for safety and yield, investors with a long-term horizon are looking to increase their allocation to real assets such as farmland.

Because of the availability of low-valued, premium farmland and agribusinesses on the continent as well as the shortage of locally available capital and skills for agricultural development, agriculture is a viable opportunity for investors seeking stability and higher risk-adjusted returns.

When we assess past performance, farmland investments in South Africa have consistently yielded a higher return in comparison to local and international equity indices, the local bond index and local real estate. Compared with other asset classes, South African farmlands have produced higher returns with moderate volatility.

According to the World Bank, agricultural investments have a two- to four-times greater impact on poverty reduction than investments in any other sectors in terms of gross domestic product. The FAO concurs, with its studies showing a positive correlation between levels of investment in agriculture and food security and poverty reduction in developing countries. In sub-Saharan Africa, growth in agricultural employment accounted for half of all employment growth between 1999 and 2009, the FAO said.

Countries such as Ghana, Ethiopia and Burkina Faso have experienced rapid agricultural growth, in some cases outpacing growth in other sectors. In Ethiopia, poverty has declined by 33%, according to the World Bank, and agricultural growth has been cited as a main driver. Mali stopped importing cereal crops for the past five years and is planning to export 500 000 tonnes of maize to its neighbours this year.

Other possible success candidates include Nigeria, Senegal, Rwanda, Angola, Zambia and Tanzania, all of which have large tracts of uncultivated arable land with large rivers that can be tapped for irrigation.

African agriculture could, and should, be thriving. Africa not only has the potential to feed itself, but also to become a major food supplier for the rest of the world.