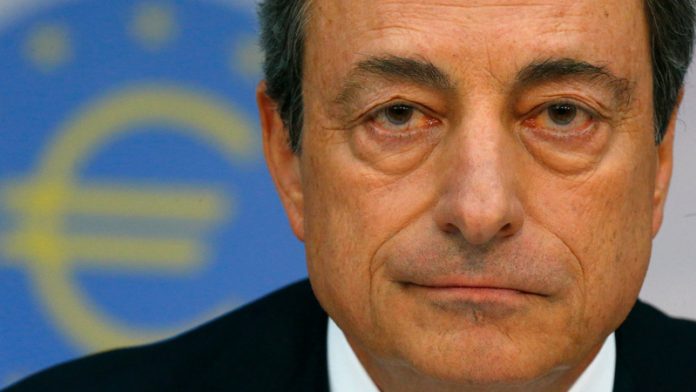 Mario Draghi’s stimulus programme hasn’t succeeded at unleashing the desired animal spirits across Europe. Here’s the evidence: six months in, and 96% of companies in the Euro Stoxx 50 index have actually become cheaper relative to earnings.

The European Central Bank’s plan to flood the financial system with cash by buying bonds was supposed to ignite the same celebration of risk-taking it did in the United States six years ago.

In fact, the opposite has happened, culminating in as much as $526-billion of share values being wiped out last month.

The failure of European quantitative easing to improve sentiment toward equities is a troubling sign to bulls as markets from Shanghai to New York endure their worst sell-offs since 2011.

Rather than set Europe apart as a haven, the ECB president’s programme has been marginalised in the stock market by events such as Greece’s credit impasse.

The Euro Stoxx 50 lost 9.2% in August amid concern that China’s economy will subdue global growth. It rebounded 1.2% on Monday following a weekly drop.

“People get very nervous when they feel there are no more policy levers left,” Graham Secker, Morgan Stanley’s head of European equity strategy, said by phone from London.

“Investor confidence is extremely low at the moment, and everyone wants to de-risk. They don’t see who is going to ride to the rescue.”

Going by economic data, Europe is making progress. Unemployment in the region unexpectedly fell, and German manufacturing expanded at a faster pace.

Economists project Europe’s gross domestic product will grow 1.5% this year, the most since 2011. And analysts still predict profits for companies in the currency bloc will increase 12% this year.

The figures are doing little to help stocks. In the latest rout, valuations in the Euro Stoxx 50 fell to 12.4 times projected earnings, compared with 15.3 when Draghi’s programme started in March.

Dragged down by exporters and commodity stocks, the gauge has tumbled 13% in the past four weeks – almost twice as much as the Standard & Poor’s 500 index, where price-earnings ratios are about 19% higher.

Europe’s carmakers, the companies that have benefited most from the depreciation in the euro, have seen valuations decline as much as 34% since this year’s peak.

A similar drop occurred in energy share valuations, and a gauge of chemical stocks became 22% cheaper. France’s Vinci SA and Vivendi SA stand out as the only two companies in the Euro Stoxx 50 that trade at higher multiples than then.

Although the US is trailing most developed-market stock indexes in 2015, its experiment with QE helped the S&P 500 post nine consecutive quarters of gains, the longest streak since 1998.

At its May record, the gauge had jumped more than threefold from its 2009 low.

When stimulus moved to Europe, stock investors followed. The region’s shares enjoyed their best start to a year in almost two decades, with money flowing into European equity funds at a record pace. But after the Euro Stoxx 50 reached an almost seven-year high in April, crises from Greece to China quietened bulls and took the Euro Stoxx 50 down 17% from its peak.

“Is Europe the region that catches everyone’s colds?” said David Hussey, the head of European equities at Manulife Asset Management in London.

“The economic recovery and bounce in corporate profits that the US has seen in the last five years has not yet occurred in Europe. It will always be heavily influenced by events globally.”

Morgan Stanley is among those telling investors to buy in the dip. Secker predicts stock prices will catch up with earnings once confidence returns, rather than the other way round.

The bank recommends investing in stocks such as Deutsche Post AG and semiconductor equipment maker ASML Holding NV after their valuations fell more than 22% from recent peaks.

“The sell-off was not economic stress, it was financial stress. Now a lot of good companies look far too cheap if you consider that not much has changed on the fundamental side.”

The danger is that they stay cheap with the Federal Reserve preparing to raise interest rates even after the International Monetary Fund said the outlook for global expansion is worse than it anticipated less than two months ago. Traders are pricing in a 30% chance rates will rise this month.

“China is threatening to slow down global growth at a time when the Fed is going to tighten,” said Luca Paolini, Pictet Asset Management’s chief strategist.

“That’s not a good environment at all. The ECB can’t hold up the recovery on its own, and fundamentals have definitely deteriorated. European earnings aren’t safe from this.” – © Bloomberg