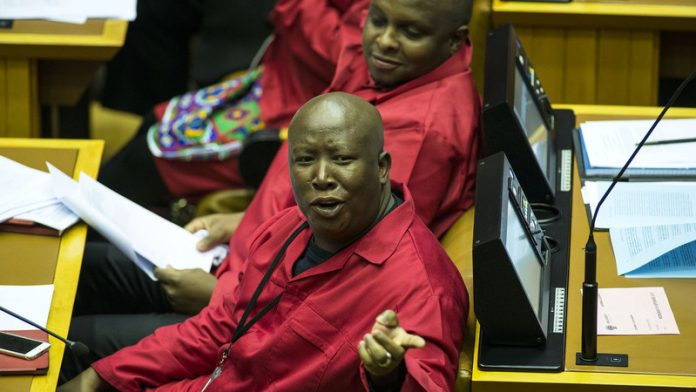 The defiant EFF leader was forcefully removed from Parliament, again, and escorted out of the precinct after he refused to withdraw comments made in a sitting last month calling Deputy President Cyril Ramaphosa a murderer during a debate on the Marikana Commission of Enquiry.

On Wednesday, chairperson Grace Boroto said the comments, which implied that Ramaphosa had premeditated the killing of workers in Marikana, were unparliamentary and asked him to withdraw. Malema refused and instead said again that “Cyril is a murderer and he participated in the conspiracy to kill workers in Marikana.”

Boroto again asked if Malema if he would withdraw his comments, but Malema again repeated his statement. “You can take me to jail for that, Cyril has got blood of innocent people. I will never withdraw that and I will never apologise to Cyril [Ramaphosa]. Cyril must rot in jail, he is a murderer, he killed our people. And if you are going to use this Parliament to protect murderers, I am not going to agree to that,” Malema said.

An irritated Boroto asked Malema to leave the house, and he refused.

“I’m not leaving, I’m not. Call those people, those bouncers you have hired to come and kill us here. In the same way you killed people in Marikana. I am not going anywhere. I’m not leaving,” Malema said repeatedly. Enforcing the new rules of Parliament, she then called for the Serjeant-at-Arms to remove him, and when that did not work, she called in the Parliamentary Protection Services who always wait outside the doors for any signs of disorder.

Malema was then forcefully removed from the House by more than 10 “bouncers”, while EFF MPs tried to prevent them from getting to their leader. When they managed to remove him from the House, the rest of the EFF MPs walked out with him.

ANC MPs clapped and cheered as Malema was escorted out.

According to the rules of the National Assembly, Malema is now suspended for a minimum of five days and is not allowed to step foot in the precinct. The office of the ANC chief whip welcomed the decision to throw him out of the House. In a statement after the sitting, the party lauded the presiding officer for strictly following the new tightened rules of the House and “ensuring that the business of the institution is not unduly disrupted by the conduct of Malema and his party – who are notorious for anarchy and chaos.

“Such allegations cannot be made except through a substantive motion – which must entail the nature of the allegations and legal evidence to substantiate the claim. “In the absence of any substantive proof to back up his allegations, Malema’s pronouncements were malicious, derogatory and slanderous. Such conduct, which undermines the decorum of Parliament and makes utter mockery of the parliamentary multiparty discourse, can no longer be tolerated,” the party said.