South Africa: The land where the corrupt go free 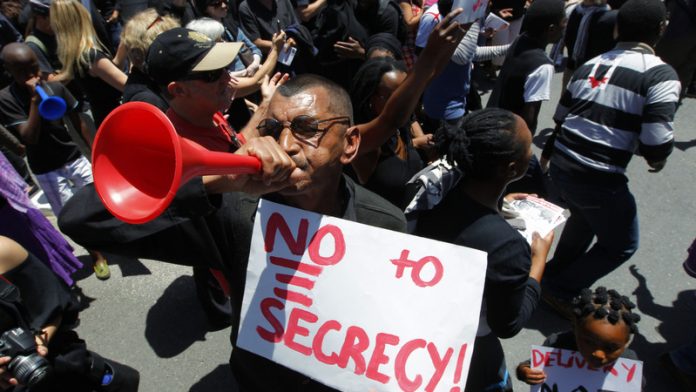 South Africa’s anticorruption policy is one of the best in the world, the only problem with it is that it is not enforced, says David Lewis, executive director of nonprofit organisation Corruption Watch and former Competition Tribunal chairperson. Ultimately, “if there are no substantial risks for engaging in corruption, this is a very difficult battle to fight”.

Speaking on corruption in South Africa as part of the programme at the Jozi Book Fair hosted at Wits University at the weekend, Lewis said South African law even includes something unprecedented elsewhere. “If you are in a position of authority and you are aware of an act of corruption to the value of more than R100 000, which is very small, and don’t report it, you are liable to some seriously draconian prison terms,” he said. “But it has never once been enforced.”

Linked to that is the question of impunity, he said. “If you are politically well-connected or economically or commercially powerful, the odds of suffering any retribution for engagement in corruption is very low.”

But he noted that from what measurements are available, corruption in South Africa –  or at least the perception of it –  is worsening.

Transparency International’s Corruption Perception Index lists South Africa as 67th in a list of countries ranked from 1 – being least corrupt – to 174, being most corrupt.

The perception of how corrupt South Africa is has worsened since 2009, when the index placed South Africa at 55 on the list, and certainly since 2000 when it was ranked 34th.

“Below us [on the list] are countries where the problem is so pervasive the possibility of dealing with it is very slight,” said Lewis. “It’s declined very precipitously. And once surveys are taken and the whole Nkandla issue is absorbed, I imagine our ranking is going to drop further.”

Difficulty in accessing information
Also speaking at the Jozi Book Fair, advocacy co-ordinator at amaBhungane Karabo Rajuili said freedom of information acted as a strong deterrent against corruption and the Promotion of Access to Information Act (PAIA) was a key piece of legislation when it comes to fighting corruption. The Companies Act is also useful to access info when it came to the shareholding of particular companies.

South Africa, however, suffers a “culture of unresponsiveness” in dealing with information requests, she said.

She said compliance rates were slightly higher for private institutions while the situation for local government was “deeply concerning”.

Rajuili said the amount of tender corruption that happens at a local government level, along with the inability to access information combined to create a “worrying picture” but one often overlooked as it was not as big as the nuclear tender. “But small-scale corruption has a direct bearing on people’s livelihoods and their ability to access goods and services.”

The use of PAIA can prove a costly way to access information. AmaBhungane, for example, spent R300 000 in seeking information on Nkandla – the private home of President Jacob Zuma.

Last year, Mail & Guardian won the right to view the Mbeki-commission report into vote-rigging during the 2002 Zimbabwean elections, after seven years of litigation in which the state spent nearly R1.2-million.

Public bodies often have more money to spend and so the economies of scale to defend or advocate these matters can become severely compromised, Rajuili said.

The state’s default position should be one of openness and accountability in order to build public trust and confidence. But where information is being hidden and the reasons for it are unclear, it only serves to heighten social anxiety.

“But the [state’s] default position is secrecy,” said Lewis. “I sometimes get the feeling there has been an instruction in the public service to just deny every PAIA request. We, purposely, have put in requests for stuff we know is in the public domain and they still refuse us access.”

Secrecy Bill
Added to the challenges in accessing information is the incoming secrecy bill, officially the Protection of State Information Bill, which awaits President Jacob Zuma’s signature. The Bill is a contentious piece of legislation which seeks to regulate sensitive information and metes out penalties such as imprisonment for publication of any information deemed to be sensitive.

The secrecy bill, Lewis said, was not all that threatening to institutions such as amaBhungane or Corruption Watch, but instead, “it will be tremendously chilling for ordinary people who don’t have access to legal advice”.

Lewis said Corruption Watch was particularly preoccupied with the National Prosecuting Authority and the stability and quality of the leadership there, as well as in other anti-corruption law enforcement agencies.

In recent months, reports about internal strife at the NPA have abounded.

“The situation there is appalling,” Lewis said, but added that when a political authority has good reason to rein in an independent prosecutorial authority, it can be no coincidence that the prosecuting authority would find itself in a bad state.

Law enforcement on its own would not in any case be enough, said Lewis.  “We [NGOs and media] can do a lot in mobilising popular opinion, using litigation for policy advocacy.”

South Africans also need to demonstrate that they will not participate in corruption. “Behaviour change is complicated territory but I think it is necessary,” Lewis said.

Rajuili agreed and said citizen engagement was needed to put the required pressure on public bodies. “Ultimately we want to see free independent and diverse media remain strong in this country and we need to see more public advocacy … the amount of lethargy at the moment won’t sustain efforts that are needed.”