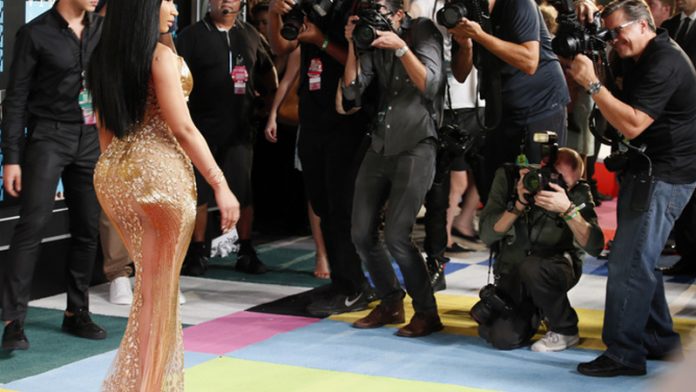 Whether real or staged, the hurling of insults and aggressive behaviour dominated mainstream press coverage of the ceremony surely much to the delight of MTV.

Both Nicki Minaj and Miley Cyrus are known for courting controversy and have been criticised for being “bad” role models for young people, particularly girls and young women. But what if the mainstream media considered that young people actually use incidents such as this and celebrity culture in a wider sense in a whole host of complex ways to negotiate their identities?

A well-publicised survey of UK parents with children under 10 years old voted both Cyrus and Minaj as the worst role models for their daughters. This came even before the recent spat.

The dislike of Minaj and Cyrus appears to be centred on their penchant for dressing provocatively and being outspoken about their sexuality. In predictable contrast, the Duchess of Cambridge was considered the most positive influence on young girls. The worst male offenders were musicians and performers Kanye West, Justin Bieber and former One Direction band member Zayn Malik.

Obsessed with celebrity
Discourse in this vein is not a new phenomenon. Musicians and performers have long been considered to influence young people in negative ways. In the 21st century, the impact of celebrity culture on society, especially on young people, has come under scrutiny.

Are today’s youth obsessed with celebrity? Is this detrimental to society? Can celebrities ever have a positive influence on young people? Does celebrity culture really matter? These are complex and plural questions to which there are few, if any, concrete answers. However, what is routinely ignored in mainstream media is young people’s sense of agency.

Much of the research and commentary surrounding such questions is centred on how celebrity culture may impact upon health and well being in terms of eating disorders or mental health issues.

The rise and dominance of social media sites such as Instagram and their links to the glorification of “super-skinny” celebrities have been cited as influences in the rise of eating disorders in young people.

The British Psychological Society recently said experts warned that youngsters are finding it increasingly difficult to cope with images permeating from a celebrity culture in which thin bodies are celebrated, larger ones are ridiculed and children are sexualised.

Sense of identity
It is logical to suggest that continual exposure to celebrity culture impacts in negative ways on some young people’s senses of identity. This may well affect health and well being, but how this happens and to what degree is incredibly complex. We must also consider the ways in which the media choose to present rather narrow ideas about how celebrities – particularly female ones – should behave and how they should look.

Those whose behaviour falls outside of these narrow ideas are often condemned as being wayward, controversial and difficult. Indeed young people may well negotiate their own gendered identities through the celebrity and by talking about them with their peers. The Celeb Youth project in the United Kingdom is an excellent example of much needed academic research into the field of celebrity and identity. It focused on the influence of celebrities in the construction of young people’s aspirations.

What is omitted from the media conversation about celebrities as role models is that many young people are more than capable of making informed, intelligent choices about which celebrities they follow and are becoming increasingly aware of the ways in which the media positions celebrities against each other in terms of race and class.

Young people may connect with those that they feel best represent them as well as those that do not. Indeed, it is also fair to suggest that many young people have no interest in celebrity culture at all.

It is the active and complex use of celebrity culture by young people to negotiate the world around them that is often lost in favour of sweeping generalisations about negative impacts. Perhaps rather than eliminating celebrity culture from the classroom, it could be used productively and constructively to allow young people to make sense of the world they are growing up in.

Kirsty Fairclough-Isaacs is a senior lecturer in media and performance at the University of Salford.

This article first appeared on The Conversation.