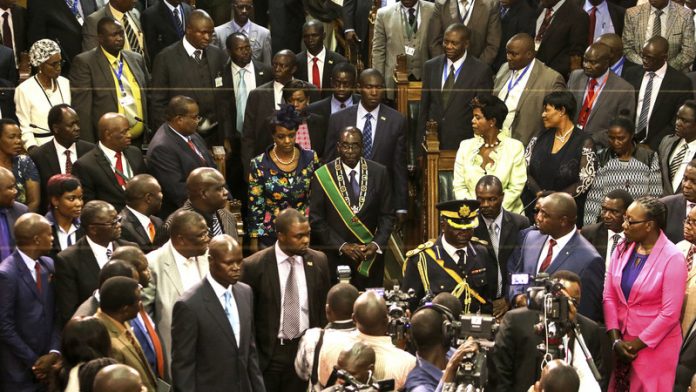 NEWS ANALYSIS
Zimbabwean President Robert Mugabe’s latest Cabinet reshuffle, his fourth since December, has increased the size of his government to a staggering 66 ministers and their deputies.

Analysts described the move as further proof of Mugabe’s preoccupation with costly patronage politics while Zimbabwe is groaning under a debilitating liquidity crunch and deepening poverty.

It took place against the backdrop of desperate efforts by Finance Minister Patrick Chinamasa to cut down the civil service and reduce recurrent expenditure in line with recommendations of the International Monetary Fund’s (IMF) staff monitoring programme.

Mugabe’s government was forced to submit to the IMF programme after the 2013 elections in an effort to rebuild confidence in Zimbabwe as a creditworthy nation. Chinamasa’s efforts to source a financial rescue package have included many trips to China, which rebuffed him.

A court ruling in July this year that allows employers to dismiss staff with three month’s notice and without severance packages led to an explosion of retrenchments in Zimbabwe’s industrial sector. At least 30?000 formal sector workers are thought to have lost their jobs.

Some of the latest appointments were made to fill the vacancies that arose after the sacking of Vice-President Joice Majuru and other ministers late last year and early this year over allegations of a plot to assassinate Mugabe.

But new ministries were also created, including the ministry of policy co-ordination and promotion of socioeconomic ventures, headed by Simon Khaya-Moyo, Zimbabwe’s former ambassador to South Africa; the ministry of rural development and preservation of national cultural heritage, headed by Abednigo Ncube; and the ministry of macroeconomic planning and investment promotion, headed by Obert Mpofu.

The post of minister without portfolio was given to Makhosini Hlongwane.

These largely duplicate the roles of existing ministries and follow other, often bizarre, ministerial creations, most notably the ministry of state for liaising on psychomotor activities in education in 2013, headed by Josiah Hungwe.

Hungwe, a loyal supporter of Vice-President Emmerson Mnangagwa, was promoted in an effort to balance the factions in Zanu-PF. It is unclear what has been achieved by this ministry and Hungwe reportedly professed to not having a clue about the nature of his responsibilities.

The incoming ministers and their deputies will receive new Mercedes-Benz cars and four-wheel-drive all-terrain vehicles, costing as much as $170?000 and $110?000 respectively, a monthly salary of between $2?000 and $4?500, free fuel and other allowances, including cellphone airtime, security aides, state housing and domestic workers.

Mugabe is constitutionally permitted to appoint five ministers who are not MPs. But he exhausted his quota when he brought in his nephew, Patrick Zhuwao, to head the powerful indigenisation ministry.

The Zimbabwe Institute for Democracy director, Pedzisai Ruhanya, attributed the move to the need to “safeguard the interests of his family through deals that will be taking place in that ministry”.

Foreign investors are mandated by law to cede a 51% shareholding in their companies to black Zimbabweans, and the transactions are handled by the indigenisation ministry.

Factional politics
The ministerial appointments are also viewed as part of Mugabe’s attempts to balance competing factional interests in the continuing struggle over who will succeed him and talk of a growing rift between Mugabe’s wife, Grace, and Mnangagwa.

Said Ruhanya: “The appointments are meant to appease the warring Grace and Mnangagwa factions but, on the whole, the biggest beneficiary is the latter, as most of the appointments favour him.”

He added that Grace’s interests would be represented by the Zhuwao and Edgar Mbwembwe, the deputy minister of foreign affairs.

The retention of Khaya-Moyo and the appointment of Tshinga Dube as the deputy minister of war veterans, both of them from the late Joshua Nkomo’s Zapu party, which merged with Zanu-PF in 1987, are seen as designed to manage internal party dynamics.

Another analyst, Alex Magaisa, echoed what Ruhanya said. “It is now common cause that there are factions in Zanu-PF, each vying for the most advantageous position in a bid to succeed President Mugabe, who is in the twilight of his long career.” Mugabe is 91 years old.

Magaisa said Mnangagwa was competing against a faction of younger-generation Zanu-PF leaders, including the higher education minister, Jonathan Moyo, and Saviour Kasukuwere, the minister of local government.

He said this group had been boosted by the appointment of Zhuwao, a close ally.

“It’s not surprising that Zhuwao, who also enjoys the advantage of being the president’s nephew, has emerged from outside Parliament to take the ministry of indigenisation and empowerment,” Magaisa said.

“The ministry includes youth in its portfolio, and will be seen as yet another key cog in the wheel of the G40 [the younger Zanu-PF politicians in their 40s and 50s].

“Moyo is already at higher education and he will use that platform to engage and woo students at colleges and universities in the battle for hearts and minds.”

Deadwood
One of the ministers appointed to the Cabinet in the reshuffle, Mpofu, has a less-than-inspiring record in government.

Initially minister of mines, he was shunted off first to transport and now to macroeconomic planning and investment promotion, despite his highly publicised failure to ensure that Zimbabwe benefited from the diamonds in Manicaland province.

Chinamasa and his predecessor Tendai Biti complained about the inadequate inflow of income to the treasury from the diamond fields.

During briefings of the parliamentary portfolio committee on mines and energy, chaired by the late Zanu-PF legislator and former mines minister, Edward Chindori-Chininga, Mpofu famously conceded that, “globally, the diamond industry is run like a mafia, with very few clean individuals”.

In a 2013 report of the committee, Mpofu was accused of having acted outside his mandate by unilaterally appointing the board of directors of the Zimbabwe Mining Development Corporation. Other problems highlighted in the report included the militarisation of the Marange diamond fields, the “leakage” of diamonds and fraudulent partnering.

“A lot of land in Chiadzwa is still under the protection of the army and inadequate studies have been conducted to ascertain the presence of the diamonds. The committee observed that the demilitarisation of Chiadzwa is going to take a long time and it was important that it is done in phases so as to reduce any negative perceptions about Chiadzwa,” the report states.

Subsequent investigations by local and international watchdogs have raised concerns about the army’s complicity in the plundering of diamonds and human rights violations. The charges were repeatedly denied by the Zanu-PF element of the then coalition government.

During his tenure at the mines ministry, Mpofu bought the Allied Bank and set up a newspaper, the Zimbabwe Mail. Both collapsed.

Prominent lawyer Beatrice Mtetwa challenged him in court last year to prove the source of his wealth after he was accused of being involved in a diamond bribe scandal. Mpofu has persistently denied wrongdoing, challenging his detractors to prove their claims.

“I have been accused of corruption, but I have never been questioned or convicted of any wrongdoing for people to say that I am corrupt,” Mpofu said in January when addressing the Zimbabwe National Road Administration board.

Mugabe has also kept faith in Lazarus Dokora, who has been retained as education minister despite presiding over dropping pass rates and the falling morale of teachers, who were adversely affected by the scrapping of financial incentives paid by parents of pupils in the absence of increases in their salaries.

David Coltart, a member of the Welshman Ncube-led Movement for Democratic Change and the education minister under the unity government, was credited with improving teachers’ morale and pass rates.

But, after taking over from him in 2013, Dokora banned extra lessons and inexplicably announced plans to retrain already qualified teachers.

Despite telling the Zanu-PF leadership in Bulawayo that there was a critical shortage of trained mathematics and science teachers in Zimbabwe, with more than 1?500 vacant posts, Dokora also made a commitment to send an unspecified number of English and science teachers to the Republic of South Sudan.

Ibbo Mandaza, an academic and publisher, said Mugabe’s new appointments were intended to placate “restive hangers-on” and were “clearly a slap in the face for the talk about macroeconomic reforms”.