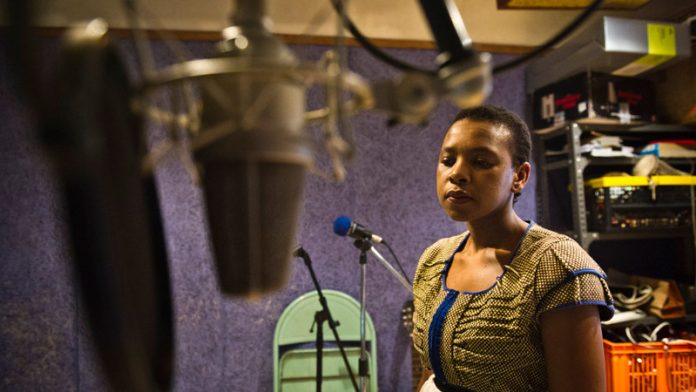 After a brief exchange of pleasantries at the Alexander Bar in Cape Town’s central area, Siya Makuzeni raises her arms. She is frustrated about an earlier conversation she had with a producer who argued against including a woman pianist in a production about the 1950s because “there were no female pianists in the Fifties”.

The vocalist-cum-trombonist has lived another day when patriarchy expects women to show permission slips to be great. Indeed, there was Simone, and Hazel Scott, Lil Hardin Armstrong, Sweet Emma Barrett, Mary Lou Williams, and more. (That this list is without a woman from Africa has not gone unnoticed.)

Nonetheless, Makuzeni is right. Fast forward to some weeks later, and vocalist Spha Mdlalose rightfully points out that, though some progress has been made, girls and women have been taught that their role in jazz is that of the vocalist and nothing else.

If you do a Google search for women in jazz, about 80% of the results lead you to write-ups about vocalists.

However, it would seem people are finally listening. The three are part of the band for Mzansi Magic’s new Sophiatown-based soap opera, The Road – an opportunity from which Ntuli has learned a great deal.

“Hearing and recreating the music of that era has been quite an educational experience. Also, one can’t help but have new-found respect for the discipline that goes behind putting together such a production,” says the University of Cape Town graduate.

The Road was a welcome challenge for Makuzeni, who composed and arranged the show’s music.

For Mdlalose, it has largely been about not being a stan (an avid fan) in front of one of her favourite actresses. “I have always loved Sthandiwe Kgoroge’s work so, most of the time, I was more focused on keeping my cool around her and not acting like a crazy fan,” she laughs.

Between them they have performed with almost everyone’s favourite artists, from Thandiswa Mazwai to Lionel Loueke. Last month, Mdlalose performed at the Oslo Jazz Festival alongside Andreas Loven. In February, Ntuli toured the country launching her debut album The Offering. Makuzeni, who, in the past 13 years, has performed and collaborated globally with various artists, says it’s about time (young) women in jazz get the recognition they deserve.

“We are dealing with a social system still generally entrenched in patriarchy. Young women in jazz are still up against a male-dominated environment, especially as instrumentalists,” she says, although there has been growing interest in young female jazz artists.

Though Mdlalose appreciates that jazz ought to mind the politics of the art, and ask itself where all the women are, that the limited number of female jazz musicians is a reflection of a broader social issue is not lost on her. Ntuli has decided to use this to her advantage.

“Many guys just can’t stand the sight of a woman carrying an 88-key weighted keyboard. That works just fine for me. I think being female has made me interesting/intriguing to people because it’s not the norm to see a female play the piano.”

She says, however, to celebrate women in jazz requires women to be in jazz in the first place. “If art is not promoted from a young age, we need to appreciate that those we do see in the arts we see because of a deliberate choice of either a parent, or the individual, or exposure to an environment like church where many people learn to play an instrument.”

For Makuzeni, the solution starts with jazz. “Jazz music has been utilised many times as a social tool for change. We have many musicians who partook in political struggles in an effort to create social change.Therefore, jazz and politics are synonymous. The more people speak out, the more we can challenge these trends in the hope of being able to have a fully representative jazz industry,” she says.

Despite always having to deal with a lot of male ego and “constantly having to prove yourself and your skills”, as Mdlalose puts it, these three women have managed to take their rightful place in the jazz scene.

When Makuzeni is not with her four-year-old son, she’s writing scores, performing reggae as Miss Grey, fronting for the rock band Ippyfuze, and mesmerising jazz lovers with her trombone and nostalgic voice.

Mdlalose does the nae nae dance while lending her crisp, powerhouse vocals at the new Coke Studio. She also juggles music sessions while trying to overcome self-doubt and release her debut album.

When Ntuli’s not winning Mbokodo Awards for women in jazz, her astounding range on the piano is in high demand from newlyweds to living legends such as Steve Dyer.

Building careers representative of an unapologetic excellence hasn’t been without its challenges. Makuzeni remembers the first time she did a trombone solo at a jam session in front of older musicians – with whom she now plays.

“Also, the industry has regressed in many ways. There are no more [lucrative] record deals, the industry rates are declining every year, and jazz musicians have to fight for festival performances against mainstream celebrities that get booked repeatedly at such events.”

Mdlalose’s biggest test has been making that elusive debut album. “Because music is so personal, you’re always wondering if what you have to offer is good enough. You’re always striving for perfection, wondering if people will like it, if they’ll get it.”

February’s tour opened Ntuli’s eyes to the realities of the jazz landscape.

“It’s challenging to reach greater audiences with the number of venues we have locally. When I went on tour earlier this year, I realised that performing more frequently is really the difference between good and great, but venues are scarce so it’s hard to build that momentum.”

With all things considered, Ntuli, Makuzeni and Mdlalose are unshakeable in their determination.

As Ntuli puts it in response to being asked what her future plans are: “Watch this space!”

The Road airs at 7.30pm weekly from Monday to Thursday on Mzansi Magic. Thandi Ntuli will perform in Prince Lengoasa’s aMaqhawekazi Big Band at the Standard Bank Joy of Jazz on Thursday September 24

On our Lists this week: Dirty Computer, J. Cole, and Sun-Ra