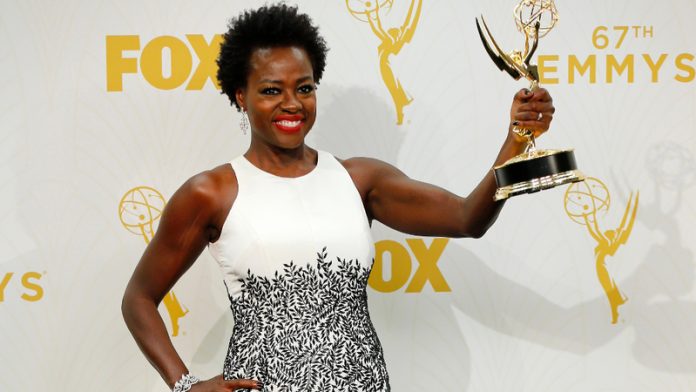 Diversity at the Emmys

On a milestone night for diversity, Viola Davis became the first African-American to win a drama lead actress Emmy for her role as a tough criminal defence lawyer in ABC’s How to Get Away With Murder, on Sunday.

“The only thing that separates women of colour from anyone else is opportunity,” Davis continued in an emotional acceptance speech. “You cannot win an Emmy for roles that are simply not there.”

Davis thanked all the writers and producers “who have redefined what it means to be beautiful, to be sexy, to be a leading woman, to be black”.

Two other black actresses, Uzo Aduba (Orange is the New Black ) and Regina King (American Crime), were also among Sunday’s winners, while Jill Soloway joined the small club of women to win a directing Emmy, for the transgender comedy Transparent.

In the first Emmys for Amazon.com’s foray into original content, Transparent also won four other Emmys, including lead actor for Jeffrey Tambor.

Tambor (71) won for his role as a father who transitions to a woman and he dedicated the award – his first Emmy – to the transgender community.

Here’s the list of key winners of the night:

ACTOR IN A DRAMA SERIES

ACTRESS IN A DRAMA SERIES

Viola Davis, How To Get Away With Murder

SUPPORTING ACTOR IN A DRAMA SERIES

SUPPORTING ACTRESS IN A DRAMA SERIES

ACTOR IN A COMEDY SERIES

ACTRESS IN A COMEDY SERIES

SUPPORTING ACTOR IN A COMEDY SERIES

SUPPORTING ACTRESS IN A COMEDY SERIES

The Daily Show with Jon Stewart

There’s no cooling the beef between rappers AKA and Cassper Nyovest, just yet. From a brawl in a club (AKA slapping Nyovest) to an exchange of words between the two, the tension is tight. Over the weekend, the saga between the two continued to make headlines as the ponytailed Nyovest acknowledged Kiernan “AKA” Forbes’s diss track.

Responding to AKA’s Composure song earlier this month, aimed at Nyovest among others, Nyovest released Ashes 2 Ashes on Friday while on tour in Europe. On the track, the Gusheshe star raps that Ashes 2 Ashes is only a precursor to the actual diss track. “I’m on tour, I’ll deal with it when I get back.” And later rapping: “This ain’t the reply, but it’s coming you should wait on it.”

The North West-born Nyovest promised fans a comeback track to Composure on September 11, when he took to Facebook to say: “I was gonna let this slide but I think I should let the fans decide. Lemme see who thinks I should respond and who thinks I should keep my ?#?composure. If you want me to respond then Like this status. We get to 100 000 likes then the fan has spoken and I will have to respond … If not, then we just move on…”

And two days later, when the target was reached he responded, “100 000 reached and the fans have spoken!!! Let’s handle the street cred game…. Loading….”

But with such a lukewarm response-not-response to AKA, we wonder if Nyovest will actually be able to match Composure. Maybe he should let this one slide.

Jackie Collins, the best-selling author of dozens of steamy novels who depicted the boardrooms and bedrooms of Hollywood’s power crowd, died on Saturday of breast cancer at age 77, her family said.

“It is with tremendous sadness that we announce the death of our beautiful, dynamic and one of a kind mother, Jackie Collins, who died of breast cancer today,” the family said in a statement.

Collins, who wrote about characters driven by lust, power and greed, sold more than 500 millions copies of her books in 40 countries and has some 30 New York Times bestsellers, according to her own website.

Collins followed her older sister to Los Angeles when she was just a teenager. She did not only write about Hollywood, she also enjoyed great success in the entertainment industry with several of her stories adapted for television.

“I’m a storyteller. I’m not a literary writer and I never pretended to be,” Collins told Reuters in 2008.

Some of her most successful novels included the 1983 Hollywood Wives, about women living glamorous lives behind the scenes of the industry, and the 1985 Lucky and 1990 Lady Boss from her series focused on the ravishing and ambitious character Lucky Santangelo, who was born into an organised crime family. – Reuters