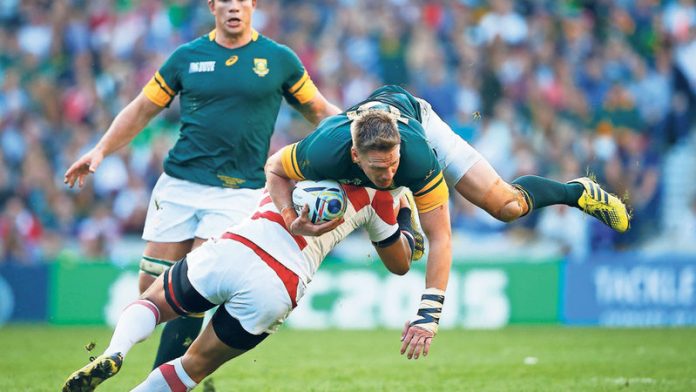 One of the worst-kept secrets in South African rugby was that Eddie Jones had signed on as coach of the Stormers for the 2016 season. If there was ever any reason for the franchise to keep it a secret, it was because the decision to employ Jones was not unanimous at boardroom level. All that changed on Saturday, when Jones coached Japan to a famous win over the Springboks. Suddenly, the Stormers had their hands on a hot property and they rushed to the press on Monday to announce the appointment of Jones.

It is all about perception. Before this World Cup, Stormers fans would have turned up their noses at Jones, perhaps suggesting that coaching Japan (and, before the national side, club Suntory Goliath) was no kind of recommendation for taking the reins of a major Super Rugby team. More than a decade had passed since his coaching career with Australia ended somewhat acrimoniously, also counting against him.

No more. Since Saturday, Jones has morphed into a coaching superhero, faster than Tokyo’s speeding bullet train and able to leap tall Springboks in a single bound. And while Jones’s stocks have soared, Heyneke Meyer’s have plummeted. This is ironic, since at the same time as the Stormers were refusing to divulge the Jones deal, the South African Rugby Union (Saru) was keeping mum about the Springbok coach being appointed for a second four-year term. Now Meyer may not last the week.

It is not unprecedented for teams to shed a coach during a World Cup. France did just that in 2011 when, following the side’s pool stage loss to Tonga, the players ejected coach Marc Lièvremont from their training sessions. In 2007 something similar happened to England coach Brian Ashton after his team’s 36-0 defeat to South Africa. On both occasions, player power propelled the teams to the final.

Is there a template for South Africa here? Rumour has it that there was already a disconnect between Meyer and his players during the Japan defeat.

Meyer, it is claimed, wanted more driving mauls and fewer aimless kicks in the second half, but his increasingly strident advice through the headphones was ignored. It sounds awfully like an attempt to rewrite history, bearing the hallmarks of an orchestrated campaign to protect the status quo.

However, Meyer’s selection for the Samoa game reveals the pressure he is under. There are 10 changes to the squad that lost against Japan, the most controversial of which are the retention of Jean de Villiers and the omission of Bismarck du Plessis. De Villiers moves to outside centre to accommodate Damian de Allende who, alongside Willie le Roux, was the most bizarre of the exclusions from the Japan game.

The fallout from that defeat sees the can being carried by Zane Kirchner, Pieter-Steph du Toit, Coenie Oosthuizen and Du Plessis. It is hard not to feel sorry for Du Toit. When Willem Alberts pulled up lame at last Friday’s captain’s run, Meyer chose to pick the lock out of position, rather than promote Siya Kolisi to the starting line-up.

As for Oosthuizen, the first thing he did after coming off the bench was to enter at the side of a ruck and give away a penalty. It was one of three penalties the Free Stater conceded in his brief time on the field, the final one of which sent him to the sin bin and scuppered Bok hopes. Incredibly, Oosthuizen was not penalised for illegal scrumming, when twice he was forced into a kneeling position by his more agile opponent.

Once again, we have a player who has been injured most of the season, failing to cope with the unique pressures of international rugby because of a lack of game time. Having had a neck operation this year, he should never have made the squad. This week it is Duane Vermeulen who is being asked to return after a neck operation and play as though he has never been gone.

This is coaching gone mad and it is not an isolated case. In the final breathless five minutes in Brighton there was the astonishing sight of the Springboks not contesting the Japanese line-out, so intent were they on stopping the inevitable driving maul. It raises the question: If you are not going to contest the lineout, what is Victor Matfield doing on the field?

This week, the vital need for the 38-year-old has forced Lood de Jager – one of the few to play well last week – on to the bench. In fact the bench is where both De Villers and Matfield belong right now, but it seems that was a bridge too far for the coach.

On Saturday the Springboks have to beat Samoa to stay in the competition. At North Harbour in 2011 they led 13-0 at half time against the same opponents before a second-half implosion left them hanging on grimly, with players dropping like flies in an intense physical battle. Will it benefit the coach to remember that Samoan players enjoy a robust contest? Probably not.

The lesson of the Japan defeat is that it is not about the size of the dog in the fight, but the size of the fight in the dog. It needs reiterating that there is enough talent in this squad to win the title; the elephant in the room is called desire.