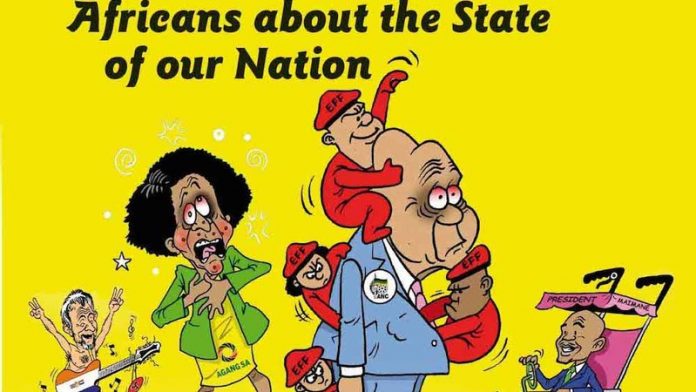 LET’S TALK FRANKLY: LETTERS TO INFLUENTIAL SOUTH AFRICANS ABOUT THE STATE OF OUR NATION
by Onkgopotse JJ Tabane (Pan Macmillan)

It is hard, if not impossible, to write and say anything about the work of Onkgopotse JJ Tabane without reflecting on the man himself. The reason for this is simple – invariably, in all his endeavours, Tabane ends up being part of the story.

In 2008, he publicly left the ANC to join the Congress of the People (Cope), then by far the most significant breakaway from the post-1994 ANC. While at Cope, as one of the spokespersons and later as an adviser to Mvume Dandala, he became entangled in the leadership wrangling of the factions. By the time he left Cope, then a failed project, there was no love lost between him and Mosiuoa Lekota, the leader of the dominant faction that presided over the collapse of Cope. Typically, his return to the ANC was as much of a spectacle as his departure.

Since his return to the ANC, the former liberation movement has battled with how to deal with his controversial views, which are often contained in opinion pieces to newspapers and websites. Privately, his comrades are irritated that he operates like a “free agent” – criticising its policies and leaders outside its structures and beyond party discipline – and continues to get government work.

His first book, published earl this month, is likely to stir up fresh debate about him, especially at the ANC’s Luthuli House headquarters and in Pretoria, which are feeling increasingly under siege.

The book, which is designed to revive the vibrancy of discourse in a country that is suffering from a toxic mix of fear and political correctness, is based on his controversial columns of the same name that were published on the Daily Maverick website. These pieces were noticed by the publisher Pan MacMillan, which asked him to refresh them for a book. The letters are funny, witty and fresh – not just a collection of the columns.

Some of the letters are old ones that have been refreshed, others are new. For example, the letters to billionaires Nicky Oppenheimer and Patrice Motsepe are new. Business, as a class, has been running scared, and its voice has gone silent except for the usual gripes at dinner parties about policy uncertainty and plain anti-business posture.

Only one, Marc Cutifani, the boss of Anglo American, the United Kingdom-based company that was founded in South Africa by the Oppenheimers, speaks in plain English, it seems.

Readers of business magazines such as the Financial Mail will be disappointed that there aren’t too many economic issues dealt with in the current volume by Tabane, a politics and law graduate.

Perhaps this oversight can be addressed in future editions of the book; after all, the economy – notably its declining state in the face of growing inequality, unemployment and poverty – ought to be the only thing that matters in today’s South Africa.

A new, and most anticipated, letter is the one addressed to President Jacob Zuma. Judging by its apologetic tone, this must have been the hardest to write.

Controversially, Tabane, now a PhD candidate at the University of the Witwatersrand, suggests that Zuma should pay back the money used for nonsecurity features at his private homestead in Nkandla.

To date, only Mac Maharaj, the president’s former and longest serving spokesperson, has dared to make what seems, on the face of it, that commonsense suggestion in an interview with the Financial Times.

As well as Tabane’s tongue-in-cheek call for Zuma to fire his advisers, the suggestion to pay back the money is likely to irk the Union Buildings.

Curiously, there’s also no letter to Cyril Ramaphosa, Zuma’s deputy, a year after he went to government. Nor are there letters to former leaders such as Thabo Mbeki, Desmond Tutu and FW de Klerk, who have dominated the local political scene for years and whose rare views about their republic should still count for something.

Sadly, a closer reading and comparison of the Daily Maverick version and the book version suggests that the acerbic language of the Daily Maverick letters might have been toned down in the book. This could either be a function of self-censorship or the result of edits ordered by the publisher’s in-house lawyers.

John Dludlu is a former editor of the Sowetan

The stories of children of apartheid activists are similar but Lindiwe Hani’s prose about a meeting with her father’s killers comes into its own.
Read more
Friday

“A mage’s name is better hidden than a herring in the sea, better guarded than a dragon’s den.” — Ursula K le Guin: A Wizard of Earthsea
Read more
Friday

New and welcome is McKinley’s meticulous marshalling of evidence to prove the point.
Read more
Friday

Moms in a park is a mother of a story

In her new novel, The Park (Macmillan), Gail Schimmel looks at motherhood. We asked her about the book and her writing world.
Read more
Advertising
Continue to the category
Politics