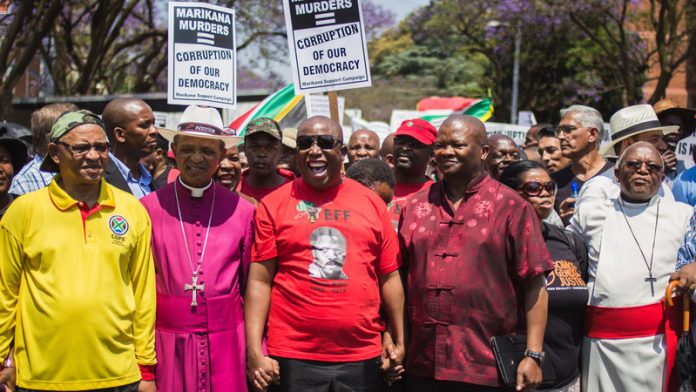 Shortly before the Unite Against Corruption march, Pretoria edition, started on Wednesday, a small bag of branded caps arrived at the starting point, Burgers Park. They were pounced on, in the manner that free things at large gatherings typically are, and the grey caps promptly found owners.

One of those owners, in bright EFF colours, put his new cap straight into a bag rather than on his head. It was a piece of memorabilia, he said, to show the folks back home who could not make the march because they had to work. But several others, in United Front T-shirts, proudly wore their new caps, at least two of them for the entire length of the three kilometre walk to the Union Buildings, and the full hour and a half of speeches once the procession got there.

The caps were branded “Solidariteit” and “Solidarity”, and pointed to the website of that conservative, Afrikaans trade union, just about on the extreme other end of the political spectrum from the socialist United Front.

The wearers were fully aware of the juxtapositioning and amused by the double takes engendered. It was that kind of day, they said. Also, it was blazing hot and a hat is a hat.

In numerical terms, the march was a damp squib. In July, organisers had dreams of drawing a million people across the country. On Wednesday, two postponements and some logistical trouble later, roughly a thousand people took to the streets at the headline Pretoria event.

“Next time,” Corruption Watch head David Lewis told the crowd, each of them should bring 20 friends, so that “the people on the hill”, in the office of the presidency, would listen. The implied, if perhaps unintended, message: when the argument is whether the crowd was 1 000 or 4 000 strong, as the highest estimate on the day had it, it is too small to force attention.

But while the numbers, smaller than some everyday service-delivery protests, should give those in power no sleepless nights, the Solidarity-wearing United Front supporters might give them pause. Especially in conjunction with the EFF viva-ing metals union Numsa, the loud cheers for the United Democratic Movement’s Bantu Holomisa and the water shared between the gender activists and the environmental activists.

The causes represented in the small crowd differed wildly, from opposing nuclear energy to putting books in schools. There were small companies, church groups, community anti-crime initiatives, and an off-duty constable. Little united them except their sense that something must be done about corruption – and the underlying assumption that it must be done by either forcing the ANC to change, or toppling it.

It was, rather, driven by fear of a dystopian future, he said.

“We don’t one day want to find ourselves walking across the Limpopo River in search of better economic opportunity.”

But many in the crowd said they felt more resonance in Julius Malema’s taunting of Minister in the Presidency Jeff Radebe that he’ll be seeing the Union Buildings only on television if the ANC does not change course.

“He [Malema] tells them they must change things because this is a negotiation now and that gets things done,” said Webster Nleya, a self-styled ‘concerned citizen’. “Really, we all know the ANC must just go eventually. That is why we are here.”

If such broad unity in the face of a perceived enemy does not do the trick on the sleepless nights, perhaps prayer of a distinctly Old Testament sort will.

Leaders need to show respect for God and respect for the people of South Africa, Methodist Church bishop and president of the South Africa Council of Churches, Zipho Siwa, told the march. As for those who steal: “In the name of God, may they not sleep well until there is change.”