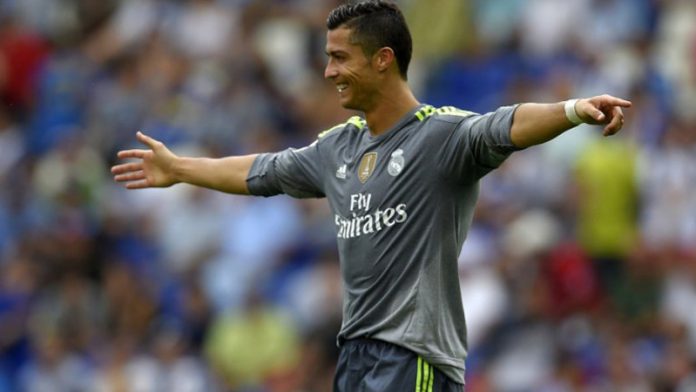 Cristiano Ronaldo equalled Raúl’s record of 323 goals for Real Madrid to become the club’s joint leading goalscorer of all time. Ronaldo hit both goals during his side’s 2-0 win over Malmo in the Champions League .

Raúl, now with New York Cosmos, hit 323 goals in 741 appearances for Real Madrid between 1994 and 2010, while Ronaldo has needed a mere 308 games to match him. With 34 hat-tricks for the club, Ronaldo has already eclipsed Alfredo di Stéfano’s record of 28.

In scoring five goals from open play in the match against Granada last season, Ronaldo joined an exclusive list of Real Madrid players, including Eulogio Martínez, Ferenc Puskás, Hans Krankl, Bebeto and Fernando Morientes, to have achieved the feat. In doing it again against Espanyol this season , he became the club’s leading La Liga scorer of all time.

Ronaldo is the only player in La Liga history to score more than 25 goals in six seasons.

229 goals in 206 La Liga games, meaning he is Madrid’s top scorer in the league

Despite falling behind to an Aritz Aduriz goal after 16 minutes, Ronaldo responded with his first Madrid hat-trick to keep them in a title hunt which would ultimately prove unsuccessful

After a slow start to the 2010-11 season, with Ronaldo netting just once in his first seven appearances for Madrid, this four-goal haul in a 6-1 thrashing of Racing made it 11 goals in October for the man from Madeira

A month later Ronaldo was at it again, a penalty in the second minute of added time completing a hat-trick that also included a stunning 30-yard free-kick

In the last game before the Spanish winter break, Ronaldo completed his three-goal haul moments after Karim Benzema had bagged three of his own, rifling home from the France striker’s pass in the 74th minute

The winter break proved to be little distraction as he grabbed the first perfect hat-trick of his Madrid career – scoring with his right foot, left foot and head in another resounding victory

It was seventh heaven for Ronaldo when his penalty in added time completed a 4-0 rout of Getafe and made it seven hat-tricks for the season. Despite his efforts, it was Barcelona who would win their third consecutive La Liga title this season

A new season, but it was the same old story for La Liga defences as Real Zaragoza were the first to come under the sword in 2011-12, Ronaldo carrying on from where he left off

A brace from the future Swansea striker Michu was scant consolation for Real’s lesser-known city neighbours in this 6-2 defeat at the Bernabéu, Ronaldo converting two penalties in his latest Madrid hat-trick

Madrid swept away Malaga once again thanks in no small part to a 15-minute Ronaldo hat-trick in the first half – on 23, 28 and 38 minutes

Ronaldo made it four hat-tricks for the season in November 2011, two headed goals coming either side of another successful penalty kick

Real’s derby hoodoo over their city rivals showed no signs of holding up in their latest meeting at the Calderón, two goals from Ronaldo in the second half adding to his first-half free-kick for a resounding victory and an eventual title win

…and he followed that one up a few days later with his first ever Champions League hat-trick in the Amsterdam Arena as Madrid cruised to a 4-1 win, rounding off the scoring with a delightful left-footed lob over the keeper from 18 yards

Real, 2-1 behind after a surprising defeat in the first leg, recovered to see off Celta Vigo with three goals from you know who

Ten minutes was all it took for Ronaldo to complete his 19th hat-trick for Real and not just any one: it was another ‘perfect’ hat-trick – left foot, header, right foot – finished off with a 72nd-minute penalty

A couple of weeks later Sevilla were once again put to the sword by Ronaldo and co, this time in the Bernabéu after two earlier 6-2 home defeats

Real Madrid emerged from the hostile atmosphere of the Turk Telecom Arena with a 6-1 win in September 2013, a second Champions League hat-trick for Ronaldo underlining the chasm between the sides on the night

Another day, another hammering for Sevilla and another hat-trick for a player who by now was closing in on his first Ballon d’Or

A free-kick, a penalty and a powerful strike from a narrow angle saw to Ronaldo’s final Madrid hat-trick of the season which – considering it was only November – was a step-down from his exceptionally high standards

A first Ronaldo treble in almost a year set Madrid on their way to a frankly preposterous winning scoreline against the former La Liga champions Deportivo, who were returning to the top flight after a year’s absence. Welcome back

Ronaldo made it seven goals in four days with a four-goal haul against Elche, his 21st La Liga hat-trick leaving him one off the record set by Alfredo di Stéfano

Ronaldo scored in his eighth consecutive match as early as the third minute, heading home Gareth Bale’s cross, before the Welshman again teed him in the second half. No3 was not the Portuguese’s finest, bundling over the line in the closing stages, but they all count

Ronaldo opened the scoring by converting a penalty that he had won, sending Sergio Álvarez the wrong way on 36 minutes. His second arrived on 66 minutes, smashing home a rebound, before the 29-year-old completed Real’s 18th straight win by slotting home at the far post

Ronaldo reached new heights against Granada, scoring a hat-trick in eight first-half minutes. After clipping home his first on the half-hour mark, he scored again in the 36th and 38th minutes to equal Alfrédo di Stefano’s record of 28 Real Madrid hat-tricks – before adding two more goals in the second half

After scoring twice inside two first-half minutes against Sevilla, Ronaldo scored a third in the second half to keep his side two points behind the leaders Barcelona at the top of La Liga. Ronaldo’s three goals took his tally for the season to 42, keeping him ahead of Barcelona’s Lionel Messi, who could manage only two in the Catalans’ 8-0 win at Córdoba, and putting him two behind Ronaldo on 40 league goals for the season.

Although it was ultimately in vain as Barcelona claimed the league title back in Madrid, Ronaldo bagged yet another treble against Espnayol. And this one was a ‘perfect’ hat-trick; one with his right foot, one with his left and one with his head as he lead his team to another victory.

Ronaldo scored five goals and became Real Madrid’s all-time top scorer in La Liga as he inspired Los Blancos to a thumping 6-0 win. His claimed his hat-trick within the first 20 minutes of the match.

After Shakhtar’s Taras Stepanenko was sent off for a second yellow card, Cristiano scored two penalties and before a late header brought him to within two goals of Raúl’s record of 323 goals for Real Madrid.