Mauritania: A green oasis in a sea of apricot and cream dunes 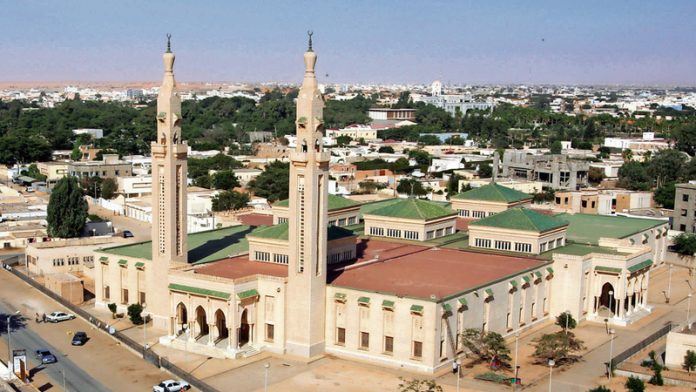 I hear shrill ululating cries from inside a windowless stone room, then frenzied drumming. Following it inside, I’m startled to see a woman lying on the ground, her head entirely shrouded and her hands tied in plastic bags. I’m relieved to learn that all the noise is in preparation for a wedding, and this is the bride: traditionally she covers her face for three days before the ceremony, and her hands have just been hennaed.

The room is in a tiny village among oases near Chinguetti, central Mauritania. We (my husband and I, and our sons, aged two and four) are travelling around its boundlessly rising butterscotch-blond dunes in the Adrar region, staying in ancient caravan towns.

Hard-pushed to pinpoint Mauritania on a map? You’re not alone. It’s south of Western Sahara and north of Senegal, on the West African coast. And it’s enormous – nearly twice the size of France. Years previously I’d travelled across the Niger Sahara with a salt caravan, and the allure of it never left me.

Then I was footloose and fancy-free; now I have two children. We often stared at maps together and I’d wonder about the huge, empty expanse of Mauritania west of Niger. I imagined it to be similar. I was right.

This is a country where you can explore the Sahara without breaking the bank, by camping and staying in guesthouses. If you have a head for adventure, it makes the ideal family holiday: the spaces are huge and there’s no malaria in the central Adrar region. I organised the trip using local travel agent Chinguitty Voyages, which sorted us out with a car, a driver, an English-speaking guide and a cook.

Nouakchott, the capital, is a sprawl of low-rise, candy-coloured buildings that seem to grow haphazardly out of the desert. We spend our first night at Auberge Diaguili, a six-bedroom riad (a traditional Moroccan house) owned by a French-Mauritanian couple. It’s on a quiet street and full of colourful furniture, with a haima (Moorish tent) in the courtyard, which our children love. Outside, the pavement is a sea of sand. Here the desert is like an overbearing mother, never quite letting go. Swaths of sand sweep in everywhere.

Desert ships: Camels are an important mode of transport in the sea of sand that is Mauritania. (AFP)

An exotic holiday destination
The country is immediately exotic, with men dressed in sky-blue boubous billowing in the ever-present wind, their eyes peering from beneath turbans. The golden and creamy white sand of the desert is pure and silky to the touch. There are no scraggy bushes or even footprints; it curves up into huge peaks, carved into troughs by the wind. The culture remains vehemently nomadic, with tents plonked in the middle of the city and camels wandering about.

I ask for directions to a particular building. “There are no fixed addresses. We’re not one for cities,” Mohamedou, our guide, replies. “In the late 1950s, Nouakchott was little more than a fishing village. But recently it has grown fast, people driven here by droughts killing their animals.”

Donkeys trot by, pulling carts. A long stretch of road is lined with tents, where people come to drink camel milk and eat barbecued goat. In the early evening, the camels are being milked and drinking water from old baths.

Nouakchott spreads along the coast between the Atlantic Ocean and the desert. Down on the shore, the sun glints on boldly painted pirogues bobbing on surfing-sized waves. Men sing as they haul colossal fish on to the sand. “The seas are some of the world’s richest,” Mohamedou says.

Tourism, though, has suffered here in recent years. In 2008, the Dakar Rally, which passes through Mauritania, was cancelled because of terror threats – it has been held in South America ever since – and the foreign office advises against travel here. Yet we meet foreigners working here who assure us it is not dangerous, the Spanish embassy recently lifted its ban, and we certainly feel safe.

An important crossroads
One thing does dismay my husband, however. Arriving at midnight, after flights with two young children, he is looking forward, perhaps naively, to a drink. But his clandestine duty-free bottle is instantly confiscated. This Muslim country is strictly dry.

Next day we drive out into the desert proper, heading north past weather-battered villages and brightly patterned tents. Most of the country looks as if it could pack up and move at any moment. The tarmac road quickly turns to sand. We stop for lunch – delicious chicken with dates and rice – in a mud house with mats on the floor while a sandstorm whips up outside.

Food is eaten sitting cross-legged on the ground, using our hands. Chatter and laughter fill the room as Mohamedou, Mohamed Lemine, our driver, and Saliq, our cook, play with our boys.

Back in the car, we see no one for miles, just wide savannah with acacia trees, alternating with flat, treeless expanse. One tent is in such a remote spot it’s staggering that the family living here survives. We drive past towering cliffs and mesas and through rocky desert to the deep Amogjar canyon, which is reminiscent of Utah.

Mauritania was an important crossroads for camel trains carrying dates and salt across the desert, and Chinguetti is one of four surviving ksours (fortified trading villages), along with Ouadane, Tichit and Oualata. Now Unesco-listed, they grew to be prosperous towns in the middle ages. Chinguetti – said locally to be the seventh most holy city of Islam – became a hub of learning and a meeting place for pilgrims travelling to Mecca. Its old libraries are full of ancient books of poetry and astronomy, leather-bound and illuminated with gold leaf, though sadly at the one we visit, Bibliothèque Fondation Al Ahmed Mahmoud, the books sit in cardboard boxes, caked in dust.

The desert dunes were a suitable venue for the famous Dakar Rally until terror threats resulted in the race moving to South America. (AFP)

The forgotten town
Many Chinguetti homes, with acacia-wood doors leading to courtyard interiors, now lie abandoned and half-buried in sand.

“Lots of people have left the old towns now,” says Mohamedou. At its heart, the mosque’s dry-stone minaret turns gold in the setting sun as turbaned men squat outside, chanting their prayers. Back across a wide oued (dry river bed) flanked by dunes is the new town of dry-stone houses with low windows (against the heat), flat palm roofs and traditional triangle motifs cut into the walls.

“We have date and hibiscus homemade jam,” Sylvette says, serving us breakfast in her welcoming guesthouse, La Gueïla, just off Chinguetti’s main street. She tells us how she came here from France and fell in love with the Sahara, spending time in the deserts of Algeria, Mali and Niger, too.

We climb the internal tower to look out over the town and dunes, and later eat a candlelit dinner here, laid out on a mat with cushions, under the stars. A small fountain tinkles in the lush garden, bold with bougainvillea.

We spend hours sliding down the big apricot and cream-yellow dunes that soar away from the town, enjoying the sand’s cool softness between our toes and shrieking with excitement at the glorious openness and space. We straddle the lip of one gigantic dune, only to find a view of another. One night we come here to eat méchoui – a traditional nomad feast of goat slow-cooked over a fire sunk into the sand. Afterwards we lie on our backs, counting shooting stars.

A green oasis in a sea of apricot
From Chinguetti, we ride camels into the desert, and out of the glare we suddenly see an incongruously green oasis. Wheat blows among date palms, vegetable plots and raised wells full of clear water. Close by are houses made from camel grass (the tufts we’ve seen sprouting from dunes). They’re empty, but only for now. “During gaytna, the date harvest, these villages are full,” says Mohamedou. I enter one house – it is instantly cool, like a larder.

We push on northeast to Ouadane, our driver weaving skilfully across the sea of dunes. There’s a boy tending his flock of goats. Two men whizz by on white camels. We stop and Zac, our four-year-old, enjoys leading a camel off into the sand. Ouadane is an old town built from terracotta rock, rising from, and blending into, the surrounding cliffs.

Here we stay at Auberge Vasque, run by the charismatic Zaida, who is a haratin, a freed slave in Mauritania’s complex caste system. The only other guests are Isabel, who is from Portugal and has a gallery in Nouakchott, selling locally sourced art and antiques (mainly to expats), and a Frenchman who teaches in the capital.

We spend our days picnicking in the desert under robin-egg blue skies, visit Qur’anic schools – usually under a tree rather than in a classroom – where children learn the Qur’an by heart from wooden slabs; we climb on to the rooftops, looking out over the mosque’s rock minaret and down into the oldest house, now a museum, full of bygone treasures.

On our way back, we stop at Terjit, another oasis, where the water flows out of a mountainside. This time there are springs to dip in, under a canopy of palms. We walk along a shallow stream, the boys laughing as fish nibble our toes. That night we camp among seductively curved dunes, wind-rippled slopes and silence. Life is good. In fact, it’s time for another tea: a short, sweet explosion of hot liquid, heated in the sand over coals.

As the sun sinks quickly, Mohamedou, Mohamed Lemine and Saliq bow to pray in unison. This is Islam. Three men who look after us, form firm friendships with our children and whip up scrumptious desert feasts. – © Guardian News & Media 2015