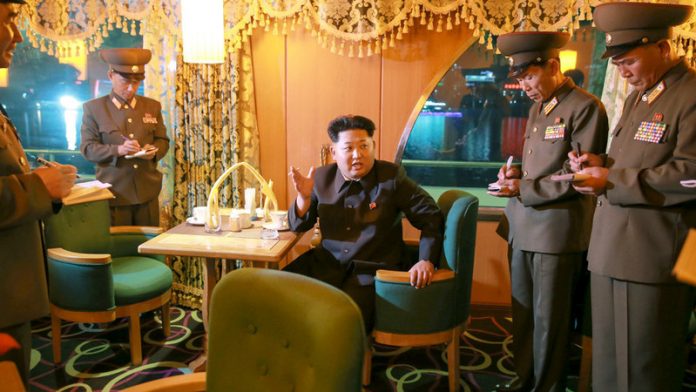 Kim Jong-un, the third hereditary ruler of North Korea, gets a really bad press. He is widely seen as a capricious, overweight youngster, fond of executing his generals and threatening the world with war; ruler of an impoverished country ever on the brink of famine but equipped with nuclear weapons.

There is some truth in this description but it does not represent the whole story. He may have a penchant for executions, but Kim is also the first ruler of the dynasty to implement market-oriented reforms.

The oft-repeated cliché of North Korea as a “starving Stalinist country” is outdated – it is neither starving nor Stalinist. Experts agree that over the past decade the country has not only recovered from the disastrous famine of the late 1990s, but has also experienced significant economic growth. Pessimists put the annual growth rate at about 1.5%, while the optimists believe it may be close to 4%.

This growth was brought about, above all, by the emergence of the private economy. While on paper private entrepreneurial activities remain illegal, the law is seldom, if ever, enforced. As a result some North Koreans – the more entrepreneurial, lucky, well-connected and ruthless of them – have recreated the market economy from scratch. Nowadays, there are private mines, truck companies and oil refineries in North Korea.

Admittedly, the owner has to register the enterprise as state property, but this fiction misleads nobody. It is estimated that 30% to 50% of North Korea’s gross domestic product is now produced by the private sector.

The presence of the new rich business people (many of whom are women) is much felt in the capital, Pyongyang, and other major North Korean cities.

They account for the majority of patrons in the upmarket restaurants popping up across the city. Although meals cost $15 to $25, roughly equivalent to the average family’s weekly or fortnightly income, these places are always crowded.

Property prices are going through the roof. A good apartment in Pyongyang costs about $100 000, and the best homes go for $200 000. Over the past 10 years, house prices in North Korea have increased tenfold. Technically, houses cannot be owned privately so people buy and sell “residence rights” only, but few see this as anything but a convenient legal fiction.

There is a spillover effect: while rich people buy houses and European cars, more and more ordinary North Koreans can afford meat at weekends and pure rice gruel every day.

All these changes began in the late 1990s, but the late Kim Jong-il, the father of the current ruler, did not quite know what to make of the growing private economy.

Sometimes he initiated crackdowns (always partial and never successful), while other times he grudgingly tolerated the changes. Kim Jong-un is different: he quietly encourages the market economy.

The greatest success of the young dictator has been the reform of agriculture, similar to what the Chinese did in the late 1970s. Fields, while technically state-owned, are given for cultivation to individual households and farmers work for a 30% to 70% share of the harvest.

The results of the reforms were predictable: the past few years have seen record-level harvests, and North Korea is now close to self-sufficiency in food production.

This year a major drought prompted concern but it now seems that farmers, working not for the party’s glory but for their own gain, managed to fix the problem, and this year’s harvest is going to be high – perhaps even a record breaker.

If plans for industrial reforms (decentralisation and partial privatisation of what is left of state industries) are taken into account, the general picture seems clear. Kim wants to apply to his country a model of authoritarian capitalism, a so-called “developmental dictatorship”.

This model worked very well in Taiwan and South Korea and now is producing impressive results in China and Vietnam.

This is good news, and observers should not be surprised that recent polls among refugees from North Korea – a group not known for their sympathies towards the regime – indicate that Kim is proving to be popular with his people.

In China, such changes were accompanied by significant political relaxation. North Korea is different: Kim’s economic reforms, however beneficial, are unlikely to lead to more personal freedoms. If anything, the young leader is more repressive that his father.

North Korea has a problem not faced by China or Vietnam: the existence of a rich twin state in the south. South Korea’s per capita income is at least 15 times higher, while its population speaks the same language and is officially part of the same nation, which is supposed to eventually, somehow, unify. To put it in context, the per capita gap between the two German states in the 1980s was merely threefold.

This gap is the reason why the North Korean state has maintained a level of isolation no other communist regime could think of: even ownership of a tuneable radio is a crime. However, a relaxation could mean the populace learning about South Korea’s unbelievable prosperity and doing what East Germans did 25 years ago in a rather similar situation.

This threat was well understood by Kim Jong-il, and was the major reason why he did not dare to launch reforms. His son made a different decision, but in order to stay in power he cannot afford any political relaxation, so economic liberalisation is now combined with public executions.

This gives Kim Jong-un the chance to succeed in reforming his country without being overthrown and lynched by a revolutionary mob. Alas, the price for this strategy, which makes perfect sense to the elite, will be paid by common people. – © Guardian News & Media

The targets were mainly from the Ndebele ethnic group, perceived as backing a rival to Mugabe, who is from the majority Shona group
Read more
Advertising