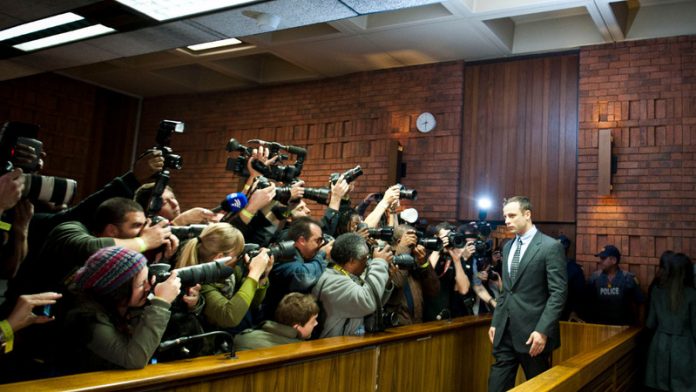 Days before Oscar Pistorius (28) was scheduled for release on parole on Friday August 21, prison officials told him to get his belongings together and prepare to go home, according to submissions made by his lawyers.

In anticipation of his release, his lawyers would later also tell parole authorities, the paralympian – who was sentenced to five years in prison last year for shooting dead his girlfriend Reeva Steenkamp – “disposed of all his personal belongings”.

Sympathetic, perhaps, to the anticipated media throng that would engulf Pistorius as soon as he left the Kgosi Mampuru prison, sources close to the process say certain correctional services officials arranged to release him on August 18, three days earlier than scheduled.

But, on the exact day of his expected covert release, Justice and Correctional Services Minister Michael Masutha announced in a television interview with eNCA that he would “seek legal advice” on the lawfulness of Pistorius’s probation.

It was an unprecedented move, which led to Pistorius’s probation being suspended a day later. It was formally set aside this week.

The move has also resulted in the effective blocking of parole for all other inmates sentenced under section 2671 (i) of the Criminal Procedure Act, which enables offenders to be placed under correctional supervision after they have completed one-sixth of their sentences.

The correctional services department says an estimated 3 000 prisoners with Pistorius’s parole profile have already been released, but it could not provide the exact number of offenders whose parole had now been suspended because of the Pistorius case. It is reliably estimated to number in the hundreds.

“This case,” Masutha said in an interview this week, “is an indication … of some of the administrative flaws that have been inherent in the system for a long time that did need to be corrected. So we were not simply going to sustain that which was not correct for the sake of consistency and continuity.”

Essentially, the minister argues, the “granting [of probation] in advance” to inmates sentenced under the same scheme as Pistorius is premature and unlawful, and must be stopped. Masutha believes inmates such as Pistorius cannot be pre-emptively approved for parole before one-sixth of their sentences has been completed.

Such pre-emptive granting of probation was common practice in the parole system – to ensure that offenders were not denied their constitutional right to freedom.

Masutha has fiercely denied that his intervention had anything to do with the state’s attempts to challenge Pistorius’s murder acquittal and has sought to undermine any suggestion that his involvement was driven by the high-profile nature of the controversial case.

But he admits he would normally not have become involved in the Pistorius parole process and only did so after receiving a petition from a women’s rights organisation unhappy that the athlete was being released during Women’s Month.

“The Oscar Pistorius case is a bit of an exception in that the parole board makes decisions on all matters that do not involve lifers without my involvement,” Masutha said. “It’s only if I’m called on to intervene … that I would intervene, as I did in this instance.”

He insists that Pistorius has “definitely” been treated fairly. But that’s not how Pistorius’s family and legal team see it. They are now considering their legal options, attorney Brian Webber told me this week.

Yet a family source said the cost of going to court was a major concern, given that the family had already spent an estimated R18-million on his criminal trial.

Pistorius’s lawyers asked for the right to appear before the parole review board tasked with evaluating the legality of the probation granted to him in June. It was denied. They were also refused the right to observe the process.

But they did make written submissions, which provide some insight into the possible arguments they’ll advance if they go to court.

The parole review board this week ordered that Pistorius be “subjected to psychotherapy in order to address criminogenic factors of the crime he committed”, but his lawyers point out in legal documents that he has been seeing a state psychologist in jail – as well as his own private therapist. Both of them, and a social worker, supported his release on parole, his family said this week.

The Kgosi Mampuru case manage­ment committee also stated this week that Pistorius had “behaved very well with no disciplinary action against him”.

Although media reports have suggested that Pistorius was found with an illegal hard drive during raids connected with fellow inmate Radovan Krejcir, the Czech fugitive currently on trial for a number of serious offences, this has never been raised in parole proceedings.

Correctional services staff and police say Pistorius had obtained written permission for the device, which contained television series he could watch in his cell.

So it appears the problem with Pistorius’s probation is solely one of timing – Masutha and the parole review board say he got it too early.

Pistorius’s lawyers submitted to the review board that, even though they believed Masutha was wrong to characterise his release on parole as premature and unlawful, the review board had the legal power to reconsider it – and to grant or refuse it.

Instead, the review board referred the matter back to the parole board that originally approved it. There is no indication yet as to when this hearing will happen.

That, Pistorius’s family says, leaves them with “the uncomfortable conclusion that the public, political and media hype that was allowed to develop around Oscar’s trial has undermined his right to be treated like any other prisoner”.

Those who find their lives threatened in violent, abusive relationships have little recourse to justice
Read more
Advertising
Continue to the category
Education