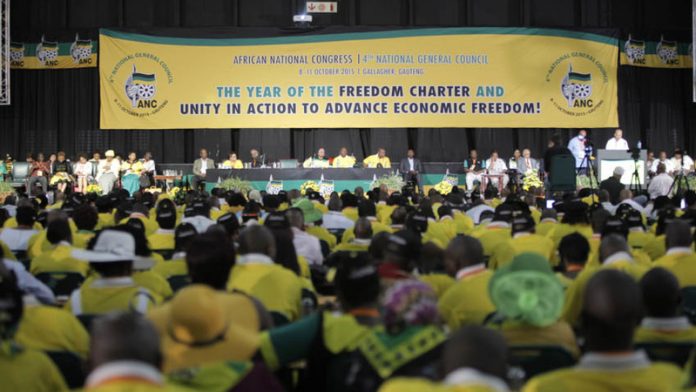 The number of ANC leaders charged with corruption has grown so much that the party is worried this would erode the credibility it’s left with.

ANC secretary general Gwede Mantashe’s organisational report – which details the state of the party – was damning particularly on the members’ failure to walk the talk against corruption. This was among the “critical challenges” Mantashe listed in his report.

“Of great concern are the NEC members who are either charged or have pending cases of corruption against them. As the number of these comrades grows we will be unable to sustain the technical argument of innocent until proven guilty,” he said.

“We must appreciate that these cases diminish the standing and dent the image of the organisation.”

Fighting corruption is one of the ANC’s top five priorities that the party sold to the voter in its election manifesto. the ANC has, however, been consistently accused of failing to rid the country of graft, which is widely believed to be committed by its cadres deployed in government.

Despite the ANC establishing the integrity commission as one of the ways to protect the party’s image against growing cases of alleged corruption by its members, Mantashe said “our comrades are, however, reluctant to step down voluntarily when facing allegations”. This is despite recommendations by the integrity commission that the accused relinquish their positions.

What worsens the problem is that “equally too the leadership structures are reluctant to avoid prolonged processes that further harm the integrity of our movement”, Mantashe said.

He tried hard to convince ANC members to put the party’s image first.

“When comrades step down from positions voluntarily, it does not mean or imply guilt. It also helps improve the standing and image of the movement,” said Mantashe.

In addition to losing some of its credibility to corruption, the ANC also saw a decline in voter support in last year’s general elections. The party admitted losing considerable support to both the official opposition the Democratic Alliance (DA) and the ANC’s breakaway party the Economic Freedom Fighters (EFF). “EFF took mainly from ANC, but also from Cope (another ANC breakaway party Congress of the People),” said Mantashe’s report.

The ANC’s biggest concern with this trend is that “our voters have experienced voting for parties other than the ANC, which increases their appetite to do so in the future”.

The ANC’s analysis comes six months before next year’s local government elections and the party plans to find ways to stop the decline in both membership and voter support.

“We should ensure that the majority of our supporters are registered. Although there was growth in registration in hotly contested provinces, registration tended to advance least where the ANC has strong support. Voter turnout in ANC strongholds was below that of the opposition in all provinces except KwaZulu-Natal,” said Mantashe’s report.

In a media briefing following the delivery of his organisational report to NGC delegates, Mantashe reiterated ANC president Jacob Zuma’s statement that factionalism was hurting the party more.

He, however, said ending factionalism would not be easy because it is “a political problem, not a natural science problem. It’s part of every political system. It’s something that will be raised all the time.”

But “we say this is a cancer and if it goes on it will kill the organisation. The organisation must have the capacity to absorb the pain. The remedy of factions is a strong organization,” Mantashe said.

On Saturday, ANC delegates will break into commissions to debate ways to improve and strengthen the organisation during the party’s three-day gathering that ends on Sunday. NGC recommendations would, however, be ratified by the 2017 national congress.

In 2012, Unesco said the language would have vanished by 2025 but 10 years later Igbo is one of the five top languages in Nigeria
Opinion

Globally financial markets and supply chains have been disrupted and the price of food and commodities have risen, all of which will have serious implications for countries on the continent
Top Six