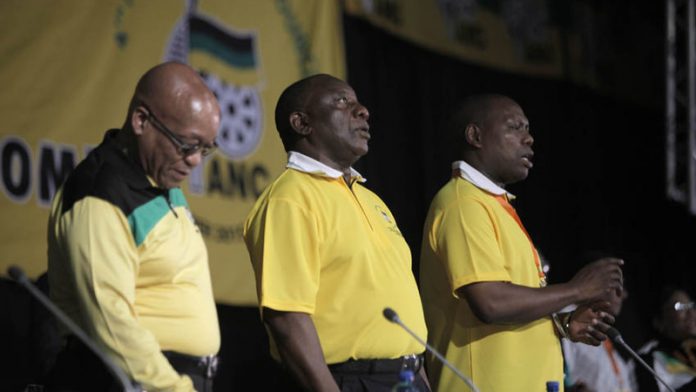 The ANC entered the third and final day of its national general council (NGC) on Sunday with resolutions taken on various policies of the ruling party.

ANC leaders described the deliberations over the weekend as in-depth and robust.

The discussions at the NGC directly affect how policy is rolled out in government and what bits of policy should be improved and what should be thrown out.

The discussions were widespread and far-reaching, ANC leaders have noted.

There has been so much said and many resolutions taken.

Mail & Guardian political reporters Qaanitah Hunter and Matuma Letsoalo sat through the briefings and picked out the most interesting and noteworthy resolutions from the commissions.

Local government and legislature
The ANC has called for a review of the local government system which will look at, among other things, getting rid of poor and dysfunctional municipalities.

Local government minister Pravin Gordhan said the number of municipalities in South Africa may drop to 260 from the current 278.

Peace and stability
ANC delegates raised concerns about the heavy-handed nature of the police when dealing with conflict and protests by members of the community. The NGC resolved that police must be trained in crowd control to avoid incidents of police brutality.

Defence Minister Nosiviwe Mapisa-Nqakula said police need to deal differently with criminals and angry protestors. There was a suggestion by some ANC members that those who are involved in police killings should face charges of high treason.

The NGC has resolved that private security should be regulated. The industry has been a concern to the ANC with accusations that some are involved in espionage.

The commission has been firm in the crackdown against terrorism and as part of this the ANC in Parliament would push ahead with the Cyber Security Bill.

At the same time, the commission has welcomed an end to the “drama” in the National Prosecuting Authority.

International relations
The eyebrow-raiser from this commission was the decision that South Africa should withdraw from the International Criminal Court.

South Africa’s withdrawal from the Rome Statute would now be discussed at the Assembly of State parties in November and at the African Union Summit next January. The NGC said South Africa should instead assist in strengthening the African Court of Justice to deal with those who found themselves on the wrong side of the law in the continent.

The ANC said on Sunday, Sudanese President Omar al-Bashir will come to South Africa in December. The South Africa government has come under heavy criticism after it allowed al-Bashir, who is wanted by the ICC for genocide crimes, out of the country despite a court order for him to be arrested. The ANC said it would continue to fight for the transformation of the United Nation Security Council – which it has accused of being biased against African countries and non-representative of African states.

ANC national working committee member and International Relations Minister Maite Nkoana-Mashabane said it can’t be that of the five permanent members of the UN Security Council, only two were signatories to the Rome Statute yet all have powers to veto at their prerogative and refer individuals to the ICC.

Dual Citizenship
The controversial issue of the ANC wanting to ban dual citizenship was not discussed at this week’s NGC but was deferred to the party’s national elective conference in 2017.

Education, health, science and technology
The National Health Insurance (NHI) took centre stage in this commission and the ANC says more commitment is needed to find the funds for this project.

A big concern in education was the terrible state of certain rural schools, teachers who don’t perform and the need to improve maths and science.

In addition, the Annual National Assessments won’t be scrapped. This is despite teachers union Sadtu opposing it fiercely. The chair of this subcommittee Naledi Pandor said everyone, including trade union federation Cosatu, agreed that it is needed in schools.

And will South African schools be teaching Mandarin? It is not clear yet, but delegates have pushed for Swahili to be taught instead.

Agriculture and land reform
A sticky point raised was land owned by foreigners, but nothing has been concluded. In February this year, President Jacob Zuma said that foreigners should not own land in the country.

Another issue that has been a point of confusion is a policy pushed by the department of rural development and land reform that 50% of farm land should be owned by farmworkers. Minister Gugile Nkwinti has noted that they have piloted a few projects and it has been doing well. Last year, some farmers showed resistance to the idea while some within the ANC said this was not an ANC policy.

Interestingly, the NGC decided that there should be a review of the Ingonyama Trust Act.

This controversial act allowed for 2.8-million hectares of land in KwaZulu-Natal to be held by traditional leaders while Zulu King Goodwill Zwelithini is a trustee.

Social transformation
The NGC has called for the regulation of alcohol advertising. It has also called for 2% of alcohol brand endorsements to go to sport development in the country.

The ANC wants the government to prioritise housing to older people over young people who apply. The government has so far built 3.7-million houses to poor people in the country.

The party has decided to establish a young women’s desk to help push the interests of young women.

Overall, social development was discussed in detail. Chairperson of the sub-committee on social transformation and Human Settlements minister Lindiwe Sisulu said the ANC wants to empower people to push their own development.

Issues of a national identity and patriotism were discussed and the ANC has resolved that it needs to create an atmosphere where South Africans would be willing to die in defence of the country.

Communication
The NGC has resolved that a parliamentary inquiry be set up into the feasibility of the media tribunal.

A propossal to introduce a media appeals tribunal was first introduced in 2010 and is aimed at regulating the media, with particular emphasis on dealing with stories which paint the ANC and government in a negative way.

The process of introducing the media appeals tribunal will be pushed through via the ANC in Parliament and the ANC insists that public input would be regarded.

In the same breath, the ANC is pushing for transformation in the print industry and has called for its fast tracking.

This commission has come out strongly calling for the corporate governance challenges at the SABC to be resolved.

The ANC wants the public broadcaster to prioritise local content as opposed to international content. The party believes the SABC has been captured by capital and needs urgent intervention to rid it of that. The ANC wants 30% of government spend on advertising to go to community media entities.

Elections
For the first time, the ANC has decided to select mayoral candidates in municipalities before local government elections next year.

This is in contrast to the party’s previous stance that voters should vote for the ANC and not individuals. In the past, mayors were only named after the local government elections.

The chair of the ANC’s subcommittee on elections, Nomvula Mokonyane, said identifying mayoral candidates would assist in branding those individuals as the face of the campaign in municipalities.

Cadre deployment
Interestingly, concerns were raised about cadre deployment and the negative effect it was having on service delivery. ANC NEC member Joel Netshitendze said, going forward, the party would make sure that qualified cadres were put in key government positions.